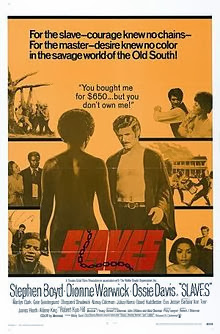 For the second straight year, one of the fall movie season's Oscar contenders will be a film dealing with slavery. Steve McQueen's fact-based Twelve Years a Slave promises to be a more serious if not more popular treatment of the subject than Quentin Tarantino's somewhat-unlikely crowd-pleaser Django Unchained, and it comes out of the film-festival circuit highly touted as one of 2013's best American films. In anticipation of the McQueen film's general release, let's return to the world of slavesploitation. Ken Norton's death last month put us in mind of his iconic performances in Mandingo and Drum, and exploitative films like those had an obvious influence on Tarantino, though probably not on McQueen. Herbert J. Biberman's Slaves will probably come closer to the McQueen film in spirit, but you can see the family resemblance to Django Unchained as well. No more than a thin, dimly discerned line separates slavesploitation from films and filmmakers that would shun the label. The subject matter touches too many nerves that, if not raw, are still tender. Part of the problem is that films about slavery tend to be about the corruption of masters as much as the they're about the oppression of slaves. The two threads are arguably inseparable, but combine them and you risk compromising a dignity on the part of the victims that some audiences (or critics) insist upon. The subject threatens to shift to the corruption of slaves as an inevitable consequence of the intimacy of plantation slavery. Any slavery film is a tightrope act and some people will never be satisfied, perhaps believing that American slavery is a subject, like the Holocaust, that can only be trivialized by fiction film. 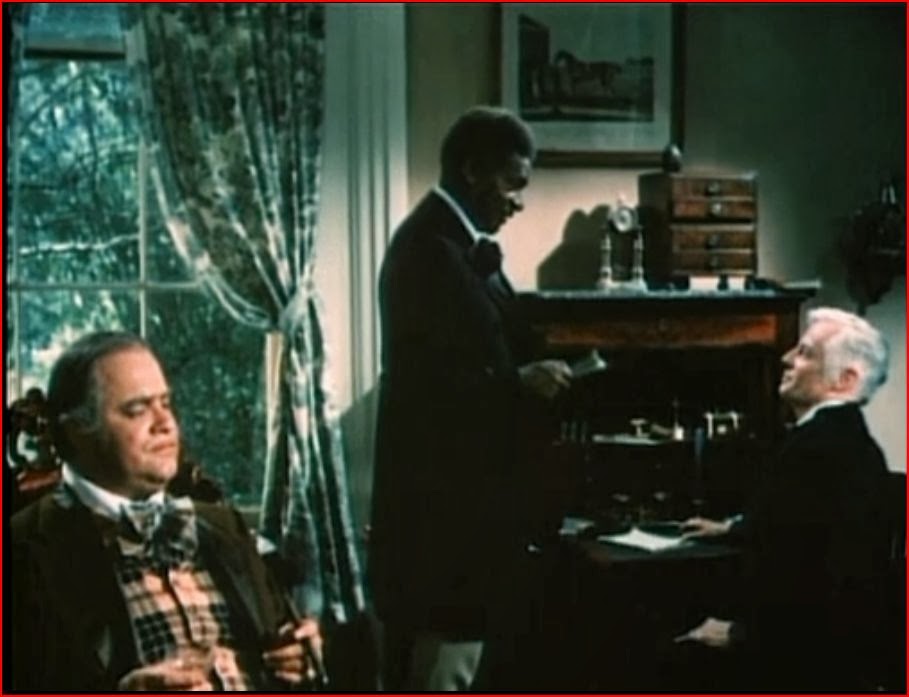 Herbert J. Biberman was a relatively minor figure in Hollywood who looms larger now as one of the legendary Hollywood Ten, the writers and directors who went to prison for refusing to testify on their involvement with Communism to the House Un-American Activities Committee. As a creator, Biberman is best known now, if known at all, for directing the 1954 film Salt of the Earth, a union-financed drama made with talent (including the actor Will "Grandpa Walton" Geer) that had been blacklisted by Hollywood. Slaves was Biberman's first picture since then, and his last; the director and co-writer would die in 1971. Co-written by Biberman with two other scribes, the film riffs on some of the tropes long associated with Uncle Tom's Cabin while doing without the more cloying elements (Little Eva, etc.) of the Stowe novel. Biberman's Uncle Tom surrogate is Luke (Ossie Davis), a trusted horse trainer and horse trader on a Kentucky plantation. We meet him returning from a trip to Ohio -- free soil -- where he conducted business for his benevolent owner. The master's trust is rewarded, while Luke's fellow chattels are astounded, by his refusal to take advantage of the opportunity to run away. Luke is a good Christian who respects the scriptural injunction on slaves to obey their masters. More practically, he's slowly earning money to buy his freedom, with an eye on making good money in the North to buy freedom for his wife and children. Luke's master supports this aspiration, but has proved fiscally irresponsible. Unable to pay his debt to a slave trader (David Huddleston), the master is forced to give up several slaves to the trader, including Luke and the more mischievous Jericho (Robert Kya-Hill). This is the first of several disillusioning moments for Luke, but there is worse to come. 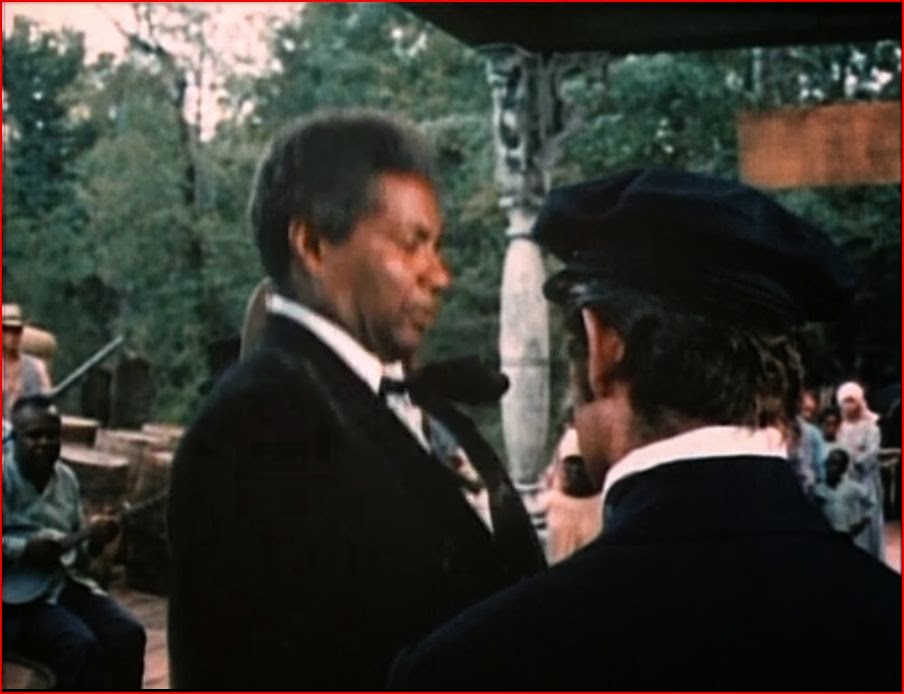 Luke and Jericho are put on the market and made to prove their health by jumping up and down (see above) before being purchased by this film's Simon Legree, Nathan MacKay (Stephen "Messala" Boyd). Hailing from New England Puritan stock, Nathan has been captain of a slave ship, dealing with African chiefs who readily sold their own people to him. He collects African art along with Africans, and commissions African inspired fashions for his slave mistress Cassie (Dionne Warwick). MacKay is a satanic or Sadean villain, self-consciously evil, fascinated by the process of breaking people's wills and testing the limits of what people will endure. He seems to be testing his own will to power constantly, reminding the tempestuous Cassie that "I'm even more stubborn than you are. I have to be. I'm master." One gets the sense that his embrace of evil is an act of surrender, that he has seen things that so darkened his view of humanity (no pun intended!!!) that there was nothing to do but become a villain. Despite his love-hate relationship with Cassie and his interest in nubile newcomers, MacKay seems more interested in power than sex, and that keeps Slaves just sort of all-out slavesploitation -- though fans of "Mandingo fighting" should note that a drunken MacKay does compel two slaves to beat each other to the death with chairs at one point. 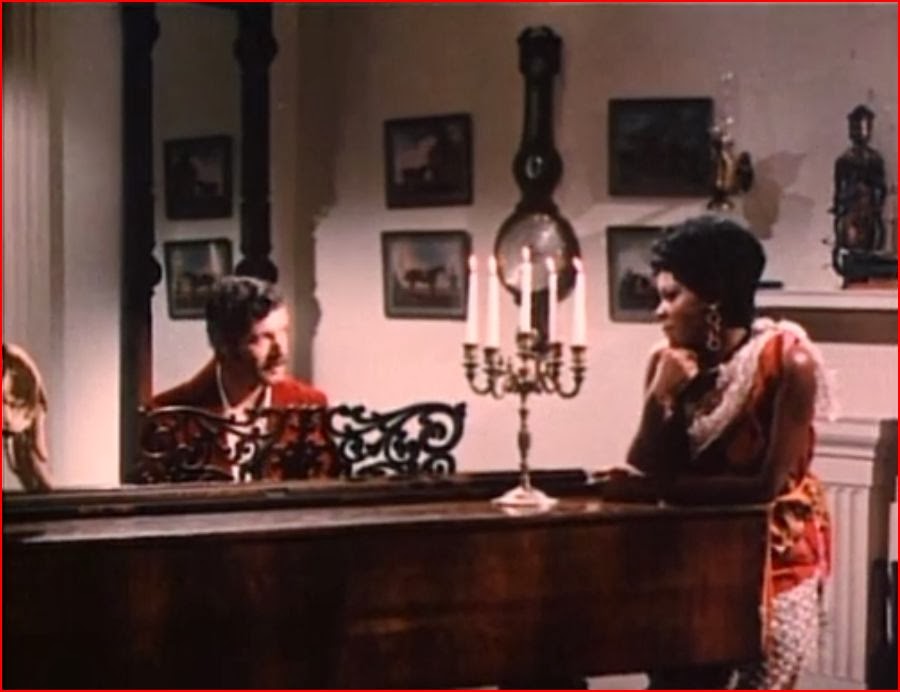 The Look of Love?

MacKay recognizes Luke's qualities and admits that he didn't pay what he did just to use him as a field hand, but his first priority is to break Luke's will -- while Cassie thinks of him initially as a pawn in her own personal power game with MacKay. Luke himself is more concerned with taking charge of a newborn girl whose mother died in childbirth, and with rescuing a teenaged girl from MacKay's depredations. Eventually the film restages the archetypal climax of Uncle Tom's Cabin, Luke risking a fatal whipping by refusing to divulge the hiding place of the girls (and Cassie), buying them time to escape with help from MacKay's estranged wife and one of her northern relations.

Biberman is not a very good director, and Slaves feels stagy and stodgy until it acquires some pace late. Once Luke and Jericho plan a mass escape requiring a schedule of distractions and misdirections the film's final act manages to maintain some honest suspense, but the tension dissipates once Mrs. MacKay takes on the role of dea ex machina. If the ultimate escape proves anticlimactic, you can argue that the real climax is Luke's confrontation with MacKay, but the moral of Luke's storyline is unclear. The script hints at a critique of Luke's Christianity, with a message that people should achieve their own salvation rather than depend on God, but Luke's sacrifice hardly seems like a vindication of anything he may have stood for. It may be significant that in his final moments he physically resists MacKay, attempting to seize the master's whip -- in an echo of Ben-Hur? -- but to some extent he still seems like a futile character. It's not so simple when the filmmaker denies himself the gratification of a revenge fantasy like Django Unchained. Biberman acknowledges the persistence of injustice as MacKay shrugs off both the burning of his cotton barn and the loss of human property ("There will always be more n*ggers in the world.") while Jericho, joining the ladies on the road to freedom, cautions that freedom "better be worth it." 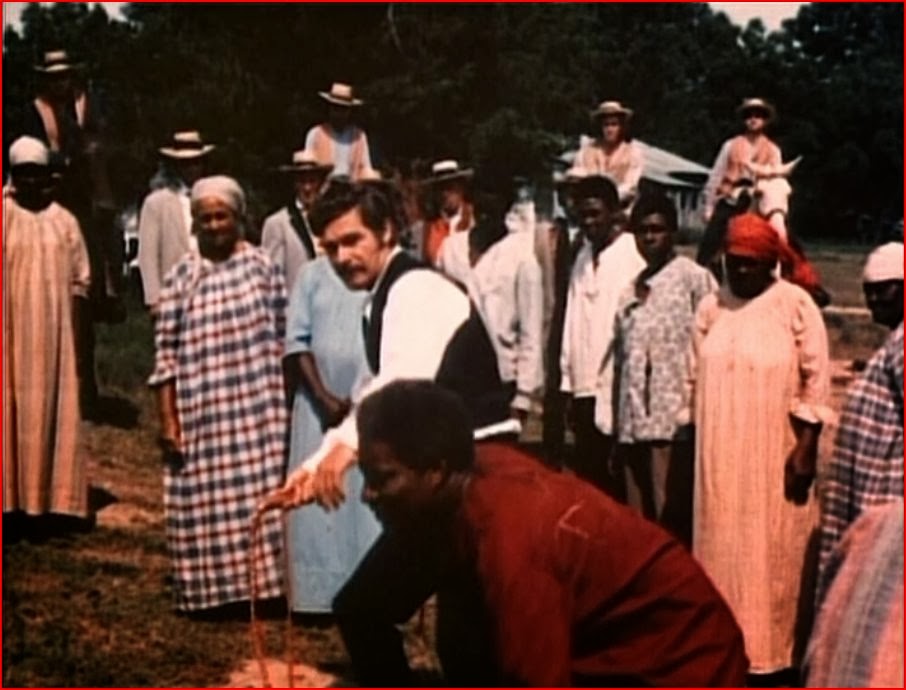 Throughout, the actors strive to redeem the stiffness of the dialogue. Davis and the actress playing his wife manage to make their final night together moving despite the prevalence of talk over action, and Davis is an authoritative presence throughout, regardless of the film's view of his faith. Boyd is perfectly cast, while Warwick is an appropriately strange figure as Cassie, at once idolized (or fetishized) and despised by MacKay and on her terms at once arrogant, opportunistic and self-loathing. Both Boyd and Warwick have been accused of bad acting but are playing such unconventional or unfathomable figures that normal standards hardly apply. They don't manage to make Slaves a genuinely good movie, but they help keep it interesting. It would be hard for any film on this subject to fail to be interesting, since each is part of the ongoing drama of Americans addressing one of their nation's founding sins. We can debate whether some films are better on the subject than Slaves, but most of them are definitely more entertaining -- for good or ill.
Samuel Wilson at 11:56 PM
Share