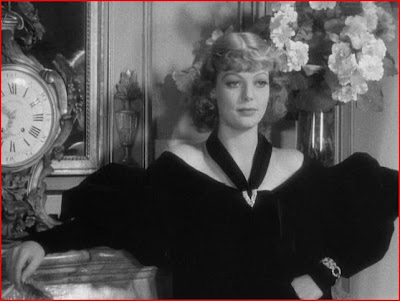 Watching two movies about John Dillinger recently showed me two sharply contrasting images of the "gun moll," the archetypal gangster's girlfriend. In John Milius's 1973 film, Michelle Phillips portrays Billie Frechette as a kind of wild child who turns into a machine-gun firing hellion, one of Milius's valkyrie figures. In Michael Mann's new film Public Enemies, Marion Cotillard invests Frechette with a degree of class that transcends her poverty, but renders her an exclusively romantic figure. Her Billie takes some serious abuse in defense of her man, but never for a moment becomes an action heroine. It made me wonder how the moll was portrayed in a film that Dillinger and Frechette might have actually seen.

Leave it to William Wellman to deliver the goods. As I've mentioned before, Wellman was on an incredible tear in the early 1930s, unleashing 17 features from 1931 through 1933, mostly for Warner Bros. Midnight Mary finds him on a job for Metro Goldwyn Mayer, but working with at least one familiar face. In the same year, Loretta Young appeared in Wellman's Heroes For Sale at Warner as the hapless helpmeet of damaged war vet Richard Barthelmess. In this film she's the title character and the star of the show.

Despite coming from a different studio, Midnight Mary is in some ways a distaff version of Heroes For Sale. Both films have protagonists who had it rough long before the Great Depression hit so many other Americans. It gave me a different sense of the Depression term "forgotten man." I now take it to mean someone whose long-term privation predates the general misery that followed the 1929 crash. 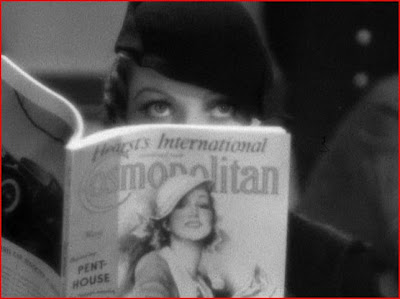 Mary Martin's tale of woe is told as a flashback as she sits in a court clerk's office waiting for the verdict in her trial for murder. She gazes at a library full of annual volumes of court minutes and remembers her past, starting with the death of her mother in 1919. We first see her and her best friend Bunny (Una Merkel) romping in a junkyard, poor from the beginning, when Mary gets the news. A suspicion I had at first sight seems to be confirmed by the lack of child actress credits for this film at IMDB. If I'm right about this, then an artful combination of hairdressing and oversized clothes equipped Loretta Young to play her character at the age of nine. I know she was reputed to be ageless, and I remember seeing a Vanity Fair photo of her in her late eighties that seemed frighteningly to confirm this, -- but this is ridiculous. Somewhat more plausible is her reappearance as a thirteen year old arrested by mistake for Bunny's attempted shoplifting and sentenced to three years in a reform school.

Free and sixteen, she's reunited with Bunny and flirting with gangsters Leo Darcy (Ricardo Cortez) and Angelo Ricci (Warren Hymer). They go out on a joyride (see below) and the girls find themselves acting as lookouts for a robbery. Leo pays Mary $50 "for being a good girl," but her conscience can't take it. She dumps the bill in a Salvation Army kettle and attempts to live honestly before the threat of starvation (and this is still only 1927) takes her back to Darcy's gang. 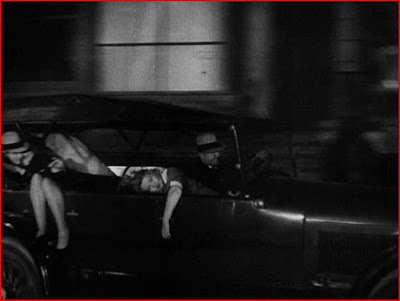 She now becomes a full-time moll, the job description including infiltrating a society party with Bunny, who fakes a fainting spell at a pre-determined time. Leo and Angelo are disguised as ambulance drivers who respond in advance to the expected distress call. 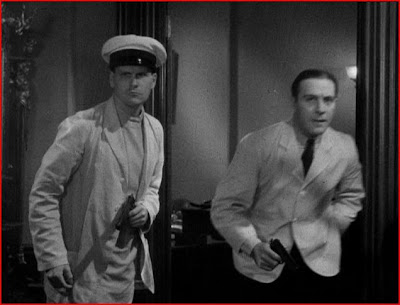 Also at the party are Tom Mannering (Franchot Tone), a young lawyer and wastrel, and his sidekick Sammy Travers (pre-typecasting Andy Devine). Mary and Tom meet cute in the confusion and, separated from her gang, she goes home with Tom to avoid the cops. There follows a classic pre-Code dialogue sequence worth quoting at length. 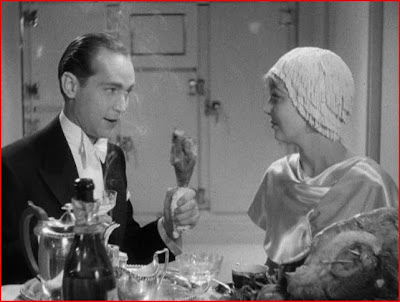 Mary: Are you ever serious about anything?
Tom: No. What is there to be serious about? The income tax? Tonsils? The
decline of the white race?...Of course, there's always sex. How do you feel
about sex, Potter? Or... do you?
Potter (a servant): At this hour of the night, sir, it would be almost
impossible to know.
* * *
Tom: Now what do you suppose made me think of sex?
Mary: I can't imagine. Most men never do.
Tom: I'm the intellectual type, myself.
Mary: Me too.
Tom: Of course, sometimes my baser nature gets the better of me.
Mary: And that's the beast in you.
Tom: How well you understand me.
Mary: Mm-hm.
Tom: By the way, do you have any plans for the rest of the evening?
Mary: Well, let me see...Oh, we could wake up your father and play 300
pinochle.
Tom: I can think of better games than that, can't you?...Haven't you just
about finished your supper?
Mary: Why?
Tom: We're not going to waste the rest of the night sitting here, are
we?
Mary: Oh, I forgot to tell you.
Tom: What?
Mary: I'm really a kitchen sitter at heart.

Indeed, Mary intends to leave once the hubbub outside has died down, and she calls a cab to take her home. But once she sees cops parked across the street, she tells Tom that she can't go back, and asks him to find her honest work. When she says she can't go back, does that mean she's going to stay with Tom? Pre-code cinema invites you to figure that out for yourself. In any event, Tom places her in a secretarial school and ultimately gives her a place in the law firm he runs with his father. He may be making a kind of honest woman but he can be ruthless about it, telling an underling to fire somebody to make room for her. Nor is he the only man in the office who has the hots for her. A relatively elderly partner loses it one night and practically throws himself on top of her until Tom breaks it up. At that point, her realizes that he'd better claim Mary as his own. Marriage seems imminent until a chance encounter with a cop who was wounded in the ambulance job and recognizes Mary as one of Leo Darcy's gang. This sets up one of those annoying noble sacrifice moments when, to protect Tom's reputation, she suddenly blows him off and tells him she was just manipulating him. She walks out on him and surrenders to the cop. That earns her three years in prison (nothing lurid there, alas), but Darcy and crew welcome her on her release because she never ratted them out.

During her sentence, Tom got married to a society girl but he isn't happy with her. In turn, as Darcy realizes that Mary still carries a torch for Tom, he grows violently jealous. A chance encounter between the two men turns into a brawl, with Tom ending up on top. Darcy vows revenge and is about to go out to shoot him when Mary, recovering from a beating, grabs one of those guns that stupid villains will always leave laying about in this kind of movie and drills Darcy. Cortez gets a vaguely creepy death scene that reminded me a little in its dehumanizing effect of Jimmy Cagney's finish in The Public Enemy. His body slumps down against a door, and as his pals try to push their way in, the corpse quivers in rythm with the pounding on the door, while Mary in her temporary madness starts bobbing her cute little head in the same rhythm. This brings us back to the present as the jury come in with their verdict.... 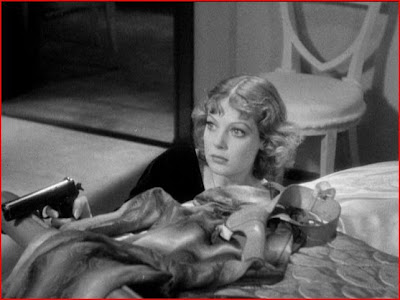 I get the feeling that Wellman had reached the point where he could put a film together in his sleep, and such was his pace that he might have had to sometimes. I don't mean that Midnight Mary is just thrown together, but that he had achieved a daunting efficiency that most likely made this easy work for him. It's a speedy film at 74 minutes, and Wellman makes the film go faster still, doing away with dissolves in favor of a kind of horizontal wipe that literally shoves one scene offscreen in favor of another. It conveys the relentless passage of time in Mary's memory and gives the impression of a picture-book narrative of an archetypal story. At the same time, he finds time for quiet, melancholy moments. In the clerk's office, Mary recalls Bunny's attempt to console her after their first night with the gangsters. In flashback, we see Bunny tell her, "What's the diff, Mary? A girl's gotta live, don't she?" Then in the present, staring at the law books, Mary answers: "Not necessarily, Bun. The jury's still out on that."

The cast is uniformly good and the production values are typical for MGM. Midnight Mary is no masterpiece, and an ending that spares Mary at least temporarily thanks to Tom's last-minute intervention is a bit much, but it's further proof of what looks like a fairly consistent level of quality in pre-Code Hollywood that might not be matched today. Any fan of classical American cinema is likely to enjoy it.

MataMachree has uploaded not only the trailer to YouTube, but the whole movie in installments, if you want to take a look at no expense but time. The trailer you can see here.

Samuel - As you say, this is no masterpiece though it is entertaining enough pre-code, worth the 74 minutes, and Loretta Young looks great. A nice review.

Thanks for writing, John. While we're getting someone's idea of the cream of the crop on DVD, these films seem to be pretty consistently entertaining.

Samuel, what an entertaining review of Midnight Mary. Loretta Young was my mother-in-law, we are gearing up for her 100th Anniversary Tributes in 2013, she passed away in 2000, but was still a remarkable woman and lovely til the end. If you get a chance to write more Pre-Code pieces on Loretta's early acting days, it would be wonderful and help us expose her talent to a whole new audience! Thanks on her behalf! Linda

Linda, it's an honor to have your comment up here. I remember seeing a photo of Young in Vanity Fair around 1999, when she was well into her eighties, and she had clearly kept her looks in an uncanny way. If TCM show more of her Pre-Codes, I'll be watching, so watch this space in the future for more of Hollywood's past.