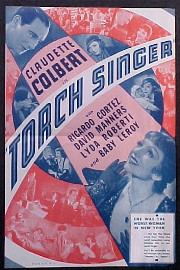 Alexander Hall's entry in Universal's Pre-Code Hollywood Collection is a slick Paramount weepie about a woman who lives a triple life. We first meet Claudette Colbert as Sally Trent, a struggling singer about to become a single mother in a charity ward. The father, Mike (who will be revealed later as Universal horror juvenile David Manners), has gone to China, and his mother mistrusts Sally's claim of his paternity. Sally shares an apartment with fellow single-mom Dora (the charmingly accented and awfully short-lived Lyda Roberti) but is soon on her own and incapable of supporting her daughter and namesake Sally in Depression conditions. She despairingly turns the girl over for adoption, but from that bottom point her career heads upward. 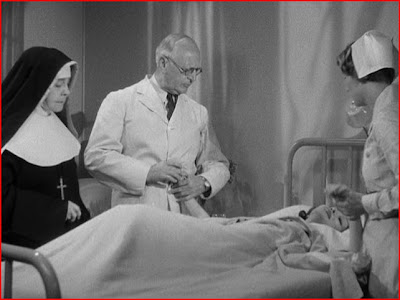 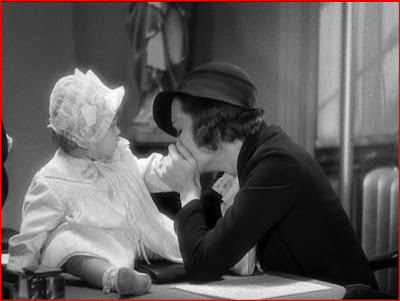 As Mimi Benton she becomes a nightclub sensation with a scandalous reputation. Little do those who scold her know that Mimi is also "Aunt Jenny," an overnight radio sensation with her daily bedtime-story program sponsored by Oatina. She scored that gig by being in the right place at the right time, thanks to her relationship with the sponsor and a smart agent (Ricardo Cortez, the original Sam Spade of cinema), taking over live and improvising when the original Aunt Jenny comes down with mike fright. 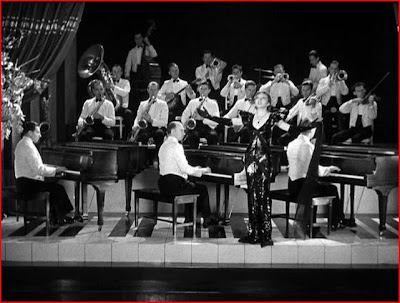 All Sally/Mimi/Aunt Jenny needs is a movie deal to become Queen of All Media for 1933. Ricardo Cortez looks on concernedly below right. 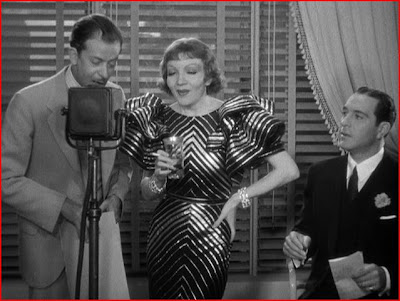 The heroine's protracted identity makes it difficult for Mike to track her down once he returns from China and learns how his mother mistreated her. Meanwhile, even though it was a condition of giving up Sally Jr. for adoption that she should never see her again, our heroine gradually realizes that her radio celebrity as a kid-show host makes it possible to track down her daughter. She conceives an elaborate birthday-club scheme in the hope that little Sally is one of her fans, but the futility of her quest makes a mockery of her success, driving her to drink and desperate illness before the trail ends with the promise of a family united at last after the compassionate agent chivalrously steps aside. 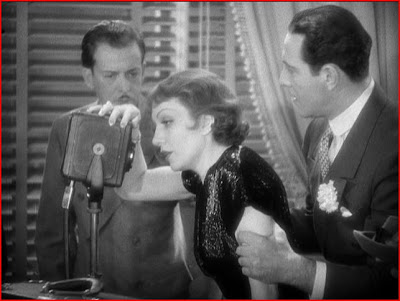 Aunt Jenny rises from her sickbed (after a bender) to make one last shout-out to Sally.
Whether Cortez's agent should have stepped aside in favor of Manners's man of wealth is open to question, and the studio itself may have questioned the outcome until the last moment. There's a very obvious edit in Cortez's final scene (I don't know if it was made after the Code crackdown or before the original release) that either eliminated some crucial dialogue or imposed the final words we actually hear. In any event, Manners holds the trump card in this mild rivalry, so his triumph was most likely foreordained. Still, it's always hard to see women picking Manners over anyone, vampires and other monsters included. It's also a little annoying to see how he apparently accomplished effortlessly what Colbert could not despite marshaling massive resources. It turns him into a deus ex machina that the film shouldn't need, mainly for the purpose of preserving the traditional family unit despite his starting out as a deadbeat dad.

Male leads aside, Torch Singer is a showcase for Claudette Colbert on the brink of superstardom, the year before Cleopatra and It Happened One Night. Here she shows what most people already knew, that she can dress up really nice, as well as something not as often heard -- her singing voice. From what I can tell it's her own, and while the songs don't set the world on fire she sells them well enough. Her main task is to run the emotional gamut and she shows great form doing so without ever succumbing to cliche. Success goes to her head but she also retains compassion for others, while her quest to recover her daughter keeps us on her side. 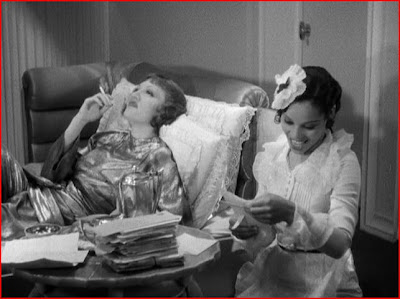 For modern audiences, one scene in particular cinches our loyalty to Colbert. In her apartment, she listens to her maid Carrie (the appealingly un-mammylike Mildred Washington, even more awfully short-lived than Lyda Roberti) read Aunt Jenny's fan mail. Carrie reads a letter from a little girl named Sally, sparking sudden hope in our heroine, who heads directly to the return address with high hopes and a big box of chocolates. She finds an amazed Sally -- a poor little black girl who's overwhelmed by the sudden appearance of her radio idol. She gets to keep that box of chocolates, and she gets her own special story from Aunt Jenny. Whatever you think of the rest of the film, this scene would probably get a thumbs-up from anyone who sees it. 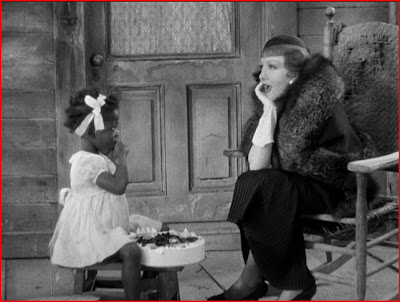 In lieu of a trailer, here's an audio upload to YouTube by edmundusrex of Colbert singing Mimi Benton's signature tune, "Give Me Liberty or Give Me Love."

Posted by Samuel Wilson at 5:46 PM

I'll watch any of Colbert's pre-code movies. Or anything she did with Cecil B. DeMille.

Torch Singer is a bit of a mixed bag. It's not the weakest movie in that boxed set, but it's not the best either.

Yes, it definitely seems compromised in some ways and contrived in others, but so far for me, the weakling of the "Universal" litter is Merrily We Roll to Hell, though I haven't seen Search for Beauty yet.

Well, I loved Charley Grapewin in his bit there, and I think this may be th ebest of this pre-code set, while SEARCH FOR BEAUTY is absolutely dreadful.

As far as this:

"Male leads aside, Torch Singer is a showcase for Claudette Colbert on the brink of superstardom, the year before Cleopatra and It Happened One Night. Here she shows what most people already knew, that she can dress up really nice, as well as something not as often heard -- her singing voice."

Yes it is her voice there.

Again you have penned a top-drawer essay, more remarkable by the relatively obscure subject you broach.

I'm intrigued to note that this is yet another 1930s movie about a mother separated from her child - this theme seems to be everywhere at that period. The film sounds worth watching from your review - I don't yet have this box set but am planning to get it.