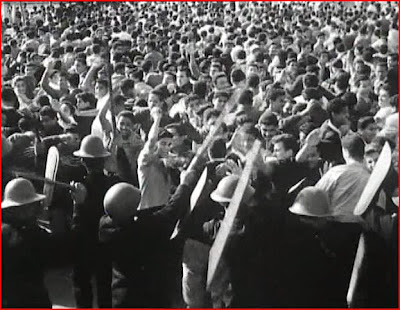 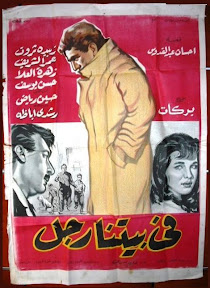 This was a re-enactment, however. The scene was staged for a film set approximately thirteen years earlier, when Egypt ("Misr" to its Arabic-speaking natives) was still ruled by a monarch who was himself little more than a puppet of Great Britain. In his time, King Farouk was a byword for decadent if not "Oriental" luxury. He was at least as much a kleptocrat as Hosni Mubarak is reputed to have been. Mubarak's fall from power last month appears to have marked the end of an era that began when the "Free Officers" deposed Farouk in a military coup in 1952. That coup was the "miracle" mentioned in the spoken prologue to our film. By the time Henry Barakat directed this patriotic romantic thriller, Gamal Abdel Nasser ruled Egypt as a strongman. Though he was decried as a dictator by the West for his nationalization of the Suez Canal, his violent repression of Islamist dissidents, and his encouragement of a global "non-aligned" movement, Nasser is recognized in retrospect as someone who at least lived frugally and retained the loyalty of the masses until his early demise in 1970. According to Wikipedia, the Egyptian film industry stood at the brink of greater state control in 1961, with Nasser entirely nationalizing the business later in the decade. A Man in Our House thus needn't be treated as state propaganda, but it certainly isn't art for art's sake, either. 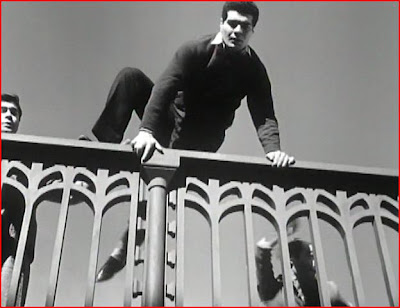 Egypt's great gift to global cinema, many will say, is Omar Sharif, who stars here shortly before David Lean and the world claimed him. He plays Ibrahim, a heroic student radical caught with hundreds of others on a railway bridge as sitting ducks for government troops. Many men jump from the bridge in panic; one of them, a friend of Ibrahim's, can't swim. Ibrahim leaps over a railing and into the water to rescue him. Later, he accepts the grim task of assassinating the country's prime minister, a deed done off-screen. 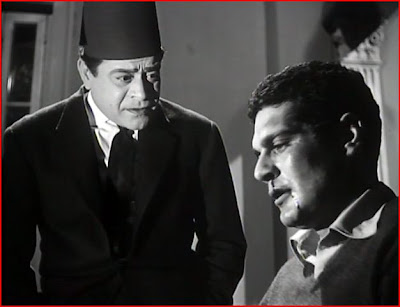 Arrested and roughly interrogated, Ibrahim manages to escape with the help of collaborators with the underground. With a price on his head, he has to hole up with the family of a sympathetic police inspector. The situation becomes something like an Arab Nationalist appropriation of The Diary of Anne Frank, as Ibrahim must spend every hour in the house and worry about every visitor. The most worrisome visitor is Abdel Hamid, an obnoxious cousin of the inspector with an eye on the same younger daughter of the house to whom Ibrahim is attracted. The cousin's habit of inviting himself to holiday dinners sets up one of the film's mundanely suspenseful scenes as Ibrahim hides in the sisters' bedroom, the one room in the house where the cousin won't just barge in. But the cousin notices the obvious, that there's one extra place set at the table, but the family hadn't been expecting him. As it becomes impossible to keep the truth from the cousin, he and Ibrahim play a human chess match, the cousin hoping that Ibrahim will name names of his underground colleagues while Ibrahim feeds him false names in order to discredit him with the underground and the police alike. 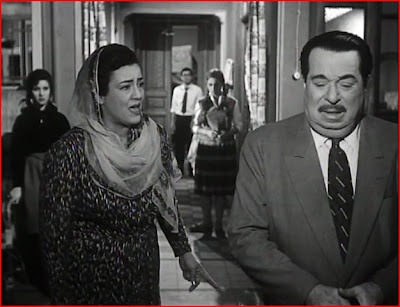 The beleaguered family
Finally, Ibrahim has to make a break for it. He takes his leave in a stolen military uniform during a virtuoso performance (to these ears) of the call to prayer, the moment of parting with his new love and the suspense of his escape made more poignant by the potent vocals. There's a nice romantic touch and a cultural lesson for someone like me in the ritual in which Ibrahim and his love each write out the shahada ("There is no God but God...") on a single sheet of paper and tear the sheet in half. Each keeps the half on which the other has written. According to folklore, this ensures that parted lovers will be reunited. But with further plot complications and another risky mission to come, their reunion remains uncertain.... 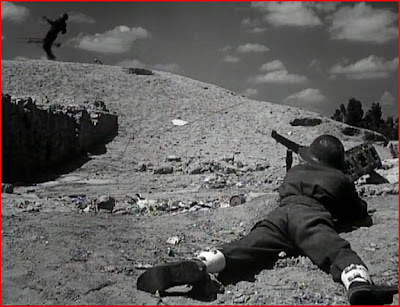 At 152 minutes (Netflix claims 159), A Man in Our House is longer than it really needs to be. Ibrahim's last mission seems tacked on to pad the film out to something like epic length, though it's curious that while the violent last act feels padded, the domestic drama of the long central act inside the house didn't seem padded at all. Barakat has a decent ensemble cast at his disposal, though my unfamiliarity with them as movie personalities may make the characters seem more real to me than they may have to regular Egyptian moviegoers. As a director he makes the most of his main interior set, which gives him plenty of opportunities for compositions in depth of family members moving through doorways and hallways. The domestic drama of Ibrahim's extended visit apparently interested him more than the more conventional heroic stuff toward the end, though the early scene-setting mass protests are also impressively staged. As for Omar Sharif, you probably only had to look into his eyes to see that he was destined for the big leagues. His star charisma is indisputable, and it's a tribute to the rest of the cast that he doesn't overwhelm them. 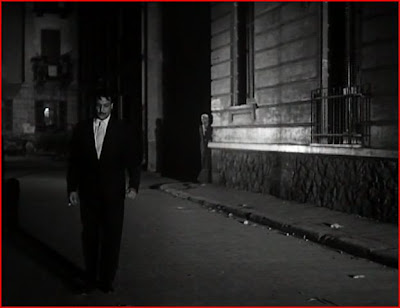 The stalker stalked. A nice noirish moment filmed on location.
Barakat's film is also a relic of a time when largely secular optimism prevailed in Egypt and the wider Arab world. While Ibrahim and other characters keep the religious holidays and express routine piety, there's hardly a sign of anything you could call "Islamism" anywhere on screen. While the matriarch of the house dresses in modestly traditional fashion, her daughters wear western clothes without anyone fussing. All the mother asks is that they take their shoes and stockings off indoors. Ibrahim himself is no bearded extremist but a clean-shaven man, no doubt designed as a role model of Egyptian modernism. Had I watched A Man in Our House a few months earlier, I might have found it a more poignant glimpse into a more irretrievably lost world. But the impression I've gotten from Egypt in 2011 is that the Ibrahims and their comrades and their world are still there, even if Nasser's political legacy is doomed to the historic ashbin. If anything, with no prime ministers needing killing...yet...they may have gotten things more right this time. If so, then Fi baitina rajul, though no great film by any means, may have historic significance as a testament to Egypt's enduring resilience against tyranny.
Posted by Samuel Wilson at 10:28 PM

Thanks for your honest review on this magnificent masterpiece.