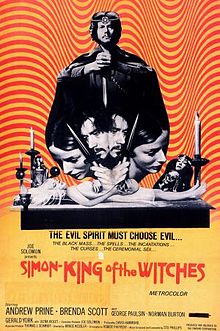 He lives in a storm drain, so he has to go out when it rains, but Simon Sinestrari has a dream. Already one of the world's few genuine magicians by his own account, he hopes to become equal to the gods, and while banishing a glowing red orb he proclaims, "I am God!" Right there you see he isn't entirely full of it; he can banish a glowing red orb. But to most casual observers, Simon (Andrew Prine) is little more than a bum. The cops pick him up on one of his rainy walks and rifle his gear in search of drug paraphernalia before tossing him in the jug for vagrancy. There he befriends a naive young hustler of the sort you'd see in movies back then. Turk (George Paulsin) takes it for granted that Simon is what he says it is and invites him into the orbit of Hercules (Byron York), a wealthy patron of eccentrics. However patronized he may feel, Simon embraces any opportunity to make money, and he demands fair value for his work. When a contemptuous skeptic thinks to repay the assumed fraud in kind with a bad check that gets him arrested again, Simon demands compensation, but an increasingly bored Hercules asks why Simon doesn't use his vaunted powers to avenge himself. Simon takes that as a dare and asks if Hercules really wants him to curse the guy. Eager to see Simon put up or shut up, Hercules confirms the dare, and Simon announces that the offender will die within two days. Right on schedule, the writer of bad checks gets brained by a flower pot pushed from the roof of a tall building by a glowing red orb while the victim gazes upward as if paralyzed. Simon has just killed a man, but the most bother that causes is when Hercules finds himself haunted by a glowing red orb, and Simon takes care of that by releasing his onetime patron from his vow to share half the guilt for the curse. Then it's on to new adventures as Simon strives to charge a wand with occult energy, first by seducing a girl, then by menacing a gay man, so that he can claim his place among the gods at exactly 1:33 p.m. on an auspicious day. Imagine how he'd feel and what he'd do if he misses his appointment, and the police are to blame....

Bruce Kessler's picaresque horror film is built around a genuinely unpredictable main character. I'm still not sure, however, if that's because writer Robert Phippeny (reputedly a practicing magician) and star Andrew Prine have tapped into an authentic ambiguity or ambivalence or because Phippeny lacked a consistent sense of Simon's personality. His opening address to the audience notwithstanding, Simon isn't the sort of flamboyant, affected personality one might expect in a "real" magician. He states his business in a flat, matter-of-fact way, and comes across most of the time as much as a curmudgeon as a mountebank. He regards the people around him with a detached, sardonic contempt that's appropriate for someone who sees others as means to his own delusional end. As a result, Simon is often a humorous character, as when he proposes a "magical" cure for Turk's inconvenient (but conveniently unillustrated) case of priapism. The overall tone of the film is quite satirical, sending up freak-chic poseurs like Hercules and the more blatant showmanship of rival magicians like the wiccan Sarah (Ultra Violet), whom Simon mocks by breaking a "witch's" broom to disrupt her ritual. Many reviewers describe Simon as a black comedy rather than a horror film, and that may explain why Simon's crimes don't provoke the horror they ought to. If everyone is fair game for mockery, it's hard to mourn for anyone.

That Phippeny and Kessler meant Simon as a satire of a subculture rather than a shocker is clear from the lackluster effects whenever Simon shows his real power. Magic is mostly a matter of glowing red orbs and other glowy effects, while the big "psychedelic" scene when Simon steps into a mirror in search of power is too derivative of the 2001:A Space Odyssey "trip" (Kessler reports that he employed some of the same FX people) to make any real impression. The effects are inevitably disappointing, but not inappropriate for a film built around a character with real magical powers who is also a loser. You get the feeling that Simon will never transcend his Skid Row milieu when you see how easily he can be distracted by the troubles of two drug-pusher pals into forgetting his scheduled assault on heaven. He can rage at the gods all he wants, but the gutter pulls on him too strongly. Prine pulls off what's asked of him; he makes you believe such people (albeit powerless) were wandering around California back then. If he has limitations, they seem to be Simon's as well. Apart from his performance, Simon works as an exploitation film thanks to plenty of irreverent nudity and sexual humor -- though some of that humor is ickily homophobic by today's standards. Some of it is spot on, though, as when a naked woman used as a living altar tries to shoo away a curious chauffeur-clad Turk by declaring, "I'm an occult object." The story falls apart toward the end when Simon curses the city by causing floods and framing officials for crimes and the curse rebounds awkwardly on him, but Simon, King of the Witches is a period artifact that's problematic in a consistently interesting way. It's less than it could be, but still more than meets the eye.

Director Kessler says the producers messed with his movie to turn it into an exploitation film. Judge for yourself by watching the oldschool ballyhoo on this trailer, uploaded to YouTube by jeffkostello.

Posted by Samuel Wilson at 9:44 PM