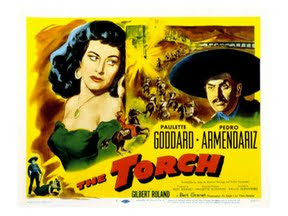 As a protege of Charles Chaplin, it was perhaps inevitable that Paulette Goddard would try to follow his path from studio stardom to autonomous auteurship -- once she divorced Chaplin, that is. She still had time to serve at Paramount Pictures, but in time Goddard became her own producer, as many stars did immediately after World War II. Goddard surrounded herself with an unusual array of talent. As an uncredited producer of Diary of a Chambermaid, she was directed by the still-expatriate French master Jean Renoir. Four years later, finally free from Paramount, she crossed the border into Mexico with co-producer Bert Granet and put herself in the hands of Emilio Fernandez. 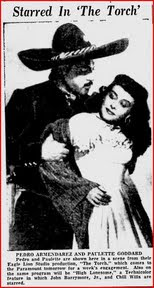 Best known to Americans as the dissolute warlord Mapache from Sam Peckinpah's The Wild Bunch, Fernandez was widely considered to be Mexico's top director during the 1940s, a fact for which his cinematographer Gabriel Figueroa gets much of the credit today. Figueroa was in on this project too, as was another Fernandez protege with some Hollywood standing, the "Clark Gable of Mexico," Pedro Armendariz. Also something of a protege of John Ford, Armendariz had staked out some territory as a character actor and occasionally a leading man, as he would be for Goddard. Fluent in English, Armendariz became an all-purpose ethnic, playing everything from a king of France to a Turkish bureaucrat to John Wayne's fellow Mongol in the doomed production of The Conqueror. He always impresses me whenever I see him, particularly alongside Wayne in Ford's Three Godfathers, and in the film Fernandez directed and co-wrote he attempts a nuanced performance as a Mexican revolutionary. Left to his own devices, Armendariz might have given a powerful performance as a flawed but ultimately noble hero. Caught between Goddard and Fernandez, he does give a memorable performance, but Goddard's, as one might expect, is even more memorable. His work is merely schizoid, while hers is one of the worst performances I've ever seen. 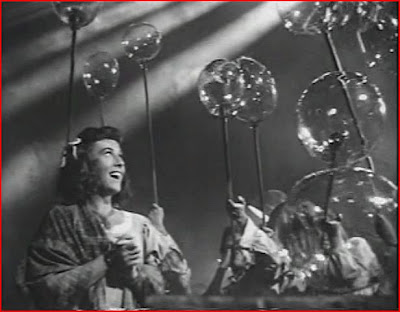 The setting is Mexico, 1918, portrayed by Figueroa as a kind of fairyland at first, at least in the eyes of Maria Dolores (Goddard), whose father owns a glassblowing factory. Fernandez and Figueroa make the glassblowing a kind of Eisensteinian spectacle as the workers prepare presents for Maria Dolores's impending wedding to an American doctor. But the fantasy of glass is abruptly shattered by a revolutionary cannonade. From out of an explosion rides the insurgent general, Jose Juan Reyes (Armendariz), who takes the town with little struggle. He has the leading men of the town brought before them, demanding money and goods from them while showing consideration to a local teacher who'd gone without pay under the old regime. Jose Juan respects dissent but despises unprincipled profiteering. 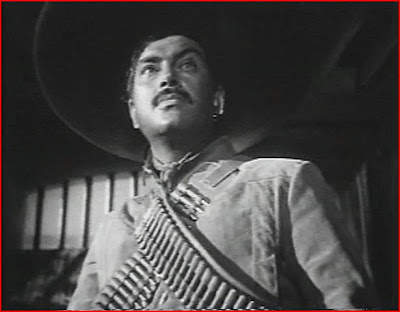 Any cause may have enemies, because men have the right to think freely, or they are not free men. One can feel respect for an enemy who fights and dies for a cause he considers just, but those who want to be right with everybody, those who are nobody's enemy when the future of the homeland is at stake -- THEY are the real traitors and leeches who grow fat off the blood of their fellow men.

Armendariz portrays a committed, intelligent and even prudent warrior, framed heroically by Figueroa's camera. He wins our sympathy by judging men as individuals, not by class, showing mercy to Maria Dolores's father and granting her fiance a safe-conduct pass so he can purchase medicine in Mexico City. And the next time we see him, he's a complete idiot, hanging with his homies and wolf-whistling Maria Dolores as she walks past and hitches up her skirt to climb a platform. "What legs!" the general exclaims, "Just to see one pretty leg again, I'll even take a slap. And what a body! But you can be sure that if the body's tempting, the face could stop a clock!" 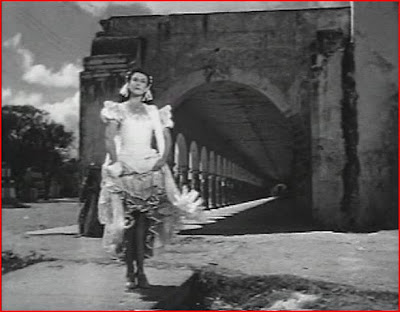 You can see how this is supposed to work. Paulette Goddard will turn around and he'll realize how wrong he was. And on cue, Armendariz acts out the recognition of his error. But it's not an error!!! Goddard is playing an ingenue at the age of forty, and despite all of Figueroa's cinematographic alchemy, she and her Crawford-esque makeup job look every year of it. And here, as in every other scene, she plays with bug-eyed mania and speaks with barely-constrained hysteria. But the scene must play out; she hikes her skirt to show both lovely legs, then marches forward to slap Jose Juan. But she's not done: "Now if you're a man you'll turn the other cheek, because you saw two legs!" she insists. When the general only laughs, she winds up and lays him out with such a roundhouse slap that she spins completely around. You get the weird feeling that she thinks she's still in a Chaplin movie, and the impression only builds for the viewer that The Torch is the bad Mexican Revolution movie that Charlie Chaplin never made. 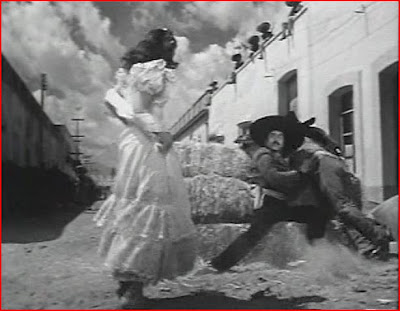 Needless to say, Jose Juan is only the more smitten with this leering wildcat. He climbs aboard his horse and stalks her through the plaza in another lovely tracking shot from Figueroa. Here's the dialogue it illustrates. 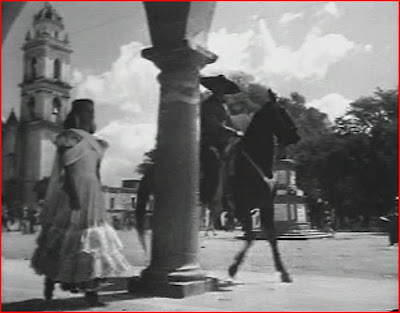 Maria Dolores: Will you please stop following me?
Jose Juan: I'm not following you, senorita.MD: Nooooo???
JJ: No. I'm escorting you.
MD: Ohhh... Then stop escorting me. 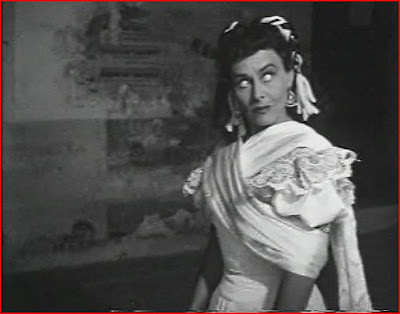 Nor is the general deterred when Maria Dolores throws a giant firecracker under his horse. The explosion tosses Jose Juan into the air -- the Lord knows what happened to the horse, but it all only confirms his clearly insane feeling that this overage gamine is The One. Between philosophical conversations with his old chum, the local priest (an eerily calm Gilbert Roland), the general courts the girl, even calling at her house -- though she refuses him entry. Their merry war resumes.

MD: Well, you have nothing to say to me! I forbid you to walk on my street. Go away.
JJ: Go away? And just who do you think you are to run me off this street?
MD: Don't you raise your voice to me!
JJ: I'm not raising my voice! That's the way I always talk.
MD: Well, don't brag about it!
JJ: And I'm not bragging! Go and call your father just the way I said.
MD: How dare you give me orders? I'm not in your silly army you act just like a dictator. You to me are nothing but a miserable bandit!
JJ: Bandit, did you say? Do you realize what you're saying?
MD: I always realize what I'm saying!...

That may be true of the character, but of the actress I'm not so sure. Granting that Goddard got her start in silent films when her peers were all learning to talk like normal people, she'd been making talking pictures for a decade by this time, so there's no excuse for how utterly tone-deaf her work is here. But the scene gets worse. In a bit closer to the Three Stooges than to Chaplin, Maria Dolores suddenly softens and invites Jose Juan to press his ear to the door. She then slams some huge ramrod or something against the door to box the general's ear. He's understandably tempted to start shooting, but thinks better of it. Now he invites her to put her ear to the door, so he can get a running start and kick it. The scene ends with Goddard in a jumping tantrum like a five year old while Armendariz laughs like a jackass. 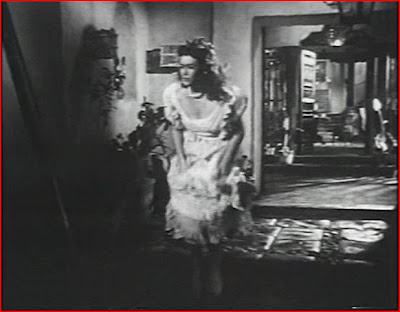 You're probably wondering how these battling bickersons end up together like they deserve. That, or you're wondering how soon they can be killed. Alas, they do not die, but others do. The great Influenza epidemic hits Mexico, and among its victims is Jose Juan's cute adopted daughter, whom he'd enrolled in the local school. The pathos of the girl's demise and the general's sorrow finally unfreeze Maria Dolores's heart, so that when the general decides to retreat without a fight when the government forces move to retake the town, our heroine quits her fiance at the last possible moment to accept the life she had scorned earlier -- the noble calling of the camp follower. 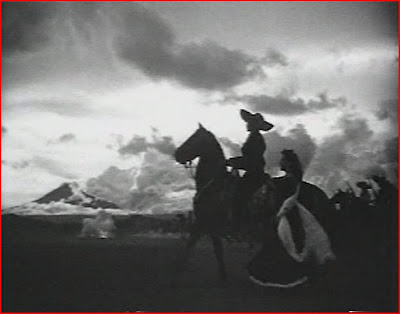 If Goddard felt that Paramount was steering her wrong by casting her, for instance, as a sympathetic Lucrezia Borgia, with The Torch she giddily steered herself and her career off a cliff. Yes, Emilio Fernandez was at the wheel, but apart from indulging Figueroa and forcing Armendariz to switch from god to goon at a moment's notice, "El Indio" seems either clueless or indifferent -- or perhaps even hostile -- toward his American star. It's hard to believe that a language barrier might have prevented him from seeing what an outlandish spectacle Goddard was making of herself -- but not having seen his Spanish-language films, I can't say for certain that Fernandez didn't treat his Mexican leading ladies that way. You can't help feeling sorry for poor Armendariz, who is so obviously better than this stuff that you wonder whether Fernandez spliced two different films, an epic and a farce, together. And to an extent I can't help respecting Armendariz for giving the worst scenes as much of himself as he does in his best scenes of that mythical separate film. But the bad film fans will want to see this one for Goddard, who gives the kind of performance I'm used to seeing from guileless, shameless nobodies in lower-budgeted, pictorially impoverished films. I don't know if her decade of stardom makes Goddard worse than all the amateur hams, but aficionados of charismatically atrocious acting won't care to make distinctions. Goddard has her place in Hollywood history, but in Mexico she earned her cult movie stardom.
Posted by Samuel Wilson at 9:36 PM