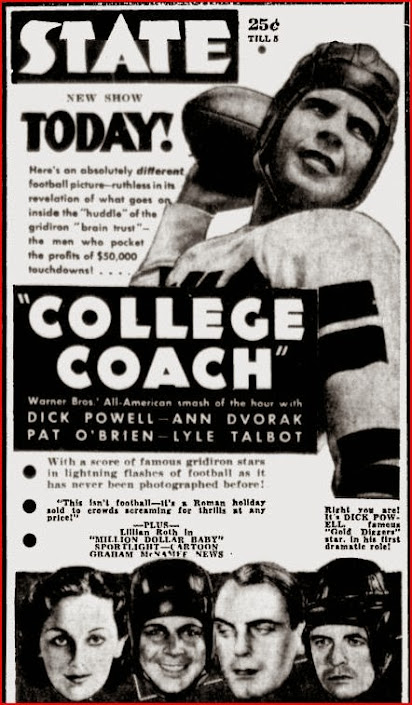 Pat O'Brien may be best remembered today for his title role in the 1940 biopic Knute Rockne, All-American, if only because of his proximity to Ronald Reagan in the film that gave the future President his "Gipper" nickname. In that picture, playing the legendary Notre Dame leader, O'Brien was the ideal of a college sports coach. The contrast with Pre-Code O'Brien could not be more stark, for in the title role of William Wellman's athletic satire the actor is for all intents and purposes the anti-Rockne. Sure, there are points of resemblance: like Rockne, who died two years before College Coach was made, Wellman's Coach Gore is a celebrity and a constant winner. But Gore lacks Rockne's loyalty to a single school; he sells his services to the highest bidder. The high bidder is Calvert University, despite a grave budget deficit. The trustees' desperate belief, then as now, is that the revenue from a successful football program will finance worthy academic projects. Gore couldn't give two farts about academics, promptly hiring patently unqualified ringers out of football mills designed to give them the high grades they need to get into college. To give you a visual idea, one of these paragons of amateurism is Nat Pendleton with a moronic Slavic accent; an unhappy subtext of College Coach is that any football player with an ethnic name is academically suspect. The real stars of the team are Buck Weaver (Lyle Talbot), a sleazy showboater, and Philip Sargent Jr. (Dick Powell), the son of the college president (Arthur Byron). Powell is the real star of the picture, in fact, and since he had become a star in 1933 by virtue of his performances in 42nd Street and Gold Diggers of 1933, Phil gets to play the piano and sing a song to himself for no reason relevant to the story. Phil's a good boy and a good student, or at least he wants to be -- we see him hard at work in the chem lab under Donald Meek's tutelage, but Buck doesn't give a damn. The two are incompatible teammates; Buck defies the coach himself if he can see an opening to score on his own, and Gore makes them roommates in the hope that, following a locker-room dustup, Phil will knock Buck down a few pegs. Buck's idea of cultured conversation is to show off a pin-up poster and ask Phil, "How'd ya like to put your finger in her coffee?"

Little does Gore know, at first, that Buck is making moves on his wife (Ann Dvorak). Mrs. Gore feels neglected by Gore's genuine dedication to winning and his sometimes contemptuous rounds of publicity arranged by a largely self-appointed agent (Hugh Herbert), while Buck would probably jump anything with decent curves. When Gore finally gets wise, he throws Buck off the team. Meanwhile, Phil quits in disgust with both the program and himself after he deliberately flunks the chem exam, knowing that practice and publicity gave him not time to study properly, only to find that he had passed (albeit with a D) despite turning in an empty exam booklet. Furthermore, Sargent Sr. is inclined to get rid of Gore after an opposing player is mortally injured during a game. Somehow, after everything, we're still supposed to root for Calvert to win the big game, and to celebrate when both Phil, possessed by school spirit, and Buck, manipulated by Mrs. Gore, rejoin the team. But the genius of the picture is that Calvert wins and Buck becomes the hero despite learning nothing during the picture. As before, he breaks up a play designed as a pass to Phil and runs for the winning touchdown himself. His comeuppance comes when he realizes that Mrs. Gore, having reconciled with hubby, had played him so he'd play. Preparing to declare his love for her to reporters, he sees the truth through a door and credits his success to dear old mother instead. By then, the Gores are ready to move on. The school just beaten has offered the coach $10,000 more than Calvert paid him. He hesitates, thinking of his wife, but she grabs the phone and accepts the offer for him.

College Coach isn't exactly a hard-hitting expose of the corruption of academia by athletics. The picture is more amused than outraged by its subject and its high-spirited cynicism is Pre-Code to a tee. Powell may get the top billing but if anyone steals the picture from him it isn't O'Brien, who in the title role is equally susceptible to theft, but Lyle Talbot in one of his best Pre-Code showcases, in a role he clearly enjoyed playing. Talbot often comes out second-best, at best, in these movies, but here he achieves a kind of seedy charisma, swaggering through the picture with a perpetual five o'clock shadow, unrepentant and nearly imperturbable despite some hard knocks along the way. Modern viewers may be distracted by John Wayne's very brief appearance as a student, near the end of his underwhelming run at Warner Bros., but Talbot should make more of an impression than he ever would until he played Lex Luthor (and quite well, too) in the Atom Man vs. Superman serial. William Wellman was also near the end of his far more memorable run at Warners, and while this isn't one of his more memorable films visually he gets the job done with typical crisp efficiency and gives O'Brien and Talbot their chances to shine. College Coach isn't on the level of The Public Enemy or Wild Boys of the Road, but it may be more relevant today, in some respects, than those or other Wellman masterworks at Warner Bros.  People (and not just movie buffs) would get this film today if they gave it a try.

And here's our usual Warner Bros. trailer, courtesy of TCM.com

Posted by Samuel Wilson at 8:00 AM