Mae West was the Madonna or the Lady Gaga of her time, a provocateur, a missionary of scandal if not that much of a singer. She got herself arrested for staging a play called Sex on Broadway back in the Roaring Twenties and thus was a celebrity well before she hit Hollywood in 1932. Unlike her spiritual descendants, West was also a kind of nostalgia act. The Twenties may have been our first moment of pop-culture nostalgia. Amid so much that was new in that decade, there was a fond recall of the "Gay Nineties," which weren't quite as scandalous as the adjective now suggests, but were remembered by survivors, and idealized by their children, as a wide-open time of fun before the Anti-Saloon League ruined everything. For her first star vehicle at Paramount, which had tried her out in a character part in another picture, West (and grudgingly acknowledged screenwriters) adapted her nostalgia piece Diamond Lil into She Done Him Wrong. That picture opens with a loving depiction of those good old days before the turn of the century, including an abundance of beer. West returned to that period several times, as if inscribing herself as a pioneer of sex in the time of her own childhood. But for her second Paramount starring role, and her first original screen story -- she gets a "Story, Screenplay and All Dialogue" credit while Wesley Ruggles directs -- she made herself a modern woman.

That may have been taking a chance, since her nostalgia appeal probably helped her get away with playing a sex goddess without the figure that required in 1933. On the other hand, her sex appeal was less a matter of physical perfection -- obviously! -- and more a matter of attitude based on experience. That makes her recasting of herself as a relative underdog a further stretch. She Done Him Wrong presumes a Mae West already idolized, an unflappable master of events. In I'm No Angel she's not exactly more vulnerable -- West seems incapable of vulnerability -- but she starts at a disadvantage. Tira (pronounced "Tyra") is a carnival performer who has to think fast when it looks like someone has been murdered in her room. Afraid that she'll be implicated -- one of her carny cronies had tried to blackmail her gentleman caller but had to brain him -- she agrees to take on the dangerous work of lion taming for her boss Big Bill (Edward Arnold) in return for the services of his high-priced lawyer (Gregory Ratoff).

Big Bill had been pushing her to do the lion act because he knew it'd make her a star and his show a sensation. Events prove his hunch correct. Lion taming was easy work in those days; flick a whip and fire a gun every so often. West also has the aid of process shots, including an ambitious traveling matte that lets a lion follow her around the cage. Anyway, the act (and her costume) goes over big and Tira soon settles into the typical Mae West lifestyle: extravagant clothes and a whole corps of fawningly sassy black maids -- Hattie McDaniel gets the least dialogue of the four, and no screen credit, while one another is famously ordered to peel a grape. Tira is one of the era's super gold diggers -- but can it be? Is she actually falling in love with one of her men? Well, it is Cary Grant, whom she'd made a star in She Done Him Wrong, so why not settle for the best?  She's ready to give up the circus gig, but Big Bill can't lose his meal ticket. He finds their old carny crony who'd made trouble earlier in the picture, and now he makes more, establishing himself in Tira's apartment like he's the old boyfriend. As Big Bill expected, Cary calls off the engagement. As no one expected, Tira, who appears at least stunned and possibly hurt at the news, sues him for breach of promise.

And now Mae West, the ghost of the Gay Nineties and a survivor of the Roaring Twenties, becomes a true Pre-Code heroine. Big Bill's lawyer agrees to handle her case, while Cary's attorney (Irving Pichel is uncredited but there's no mistaking that mellifluously sinister voice) assembles a small army of former lovers to detroy Tira's credibility. Their relationships are Tira's area of expertise, not the lawyer's, so she convinces him, and the judge, to let her cross-examine the defense witnesses. Any woman playing the lawyer's part on screen was still a rarity at this time, and Mae West as a mock-lawyer must have been dynamite for 1933 audiences. She lives up to the moment, brilliantly demolishing Pichel's case man by man, vindicating herself without denying or renouncing anything, including the gifts she accepted -- but did not solicit, she insists -- from all the men. It may be her greatest scene on film because it requires her to really engage her interlocutors -- she often seemed oddly aloof, as if walled up behind her own one-liners, in She Done Him Wrong -- but in a confrontational setting that allows her to assert her preferred dominance. Through it all, Pichel still has a trump card to play: Grant's own testimony about the man in her room will ruin Tira despite everything. But as he watches her fight for her due and her good name, Grant gains new respect for her and pretty much falls in love over again. He finally orders Pichel to stand down, refusing to contest the suit any further. As it turns out, he won't lose anything because he shortly proposes to her and she tears up the settlement check. That is, he won't lose any more than comes with supporting Mae West's lifestyle, but that's a happy ending for Mae and her fans, and the apogee of West's movie career. The advent of Code Enforcement the following year delayed the release of her follow-up picture and forced its transformation from It Ain't No Sin to Belle of the Nineties. It was still a hit -- there was new reason, even after Repeal, for nostalgia for those wide-open days -- but it was downhill from there. As her movie star declined, she survived as a living legend, re-emerging occasionally -- for the last time, perhaps most notoriously, at age 85 -- to assert that her sex appeal was a matter of pure will. If others haven't followed that path to its end yet, some inevitably will. Mae may have hoped to be timeless, but she belongs to Pre-Code Cinema, and with I'm No Angel she certainly earned her spot.

Meanwhile, how about dessert? 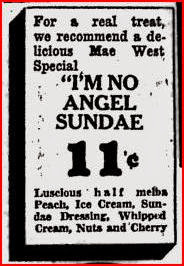