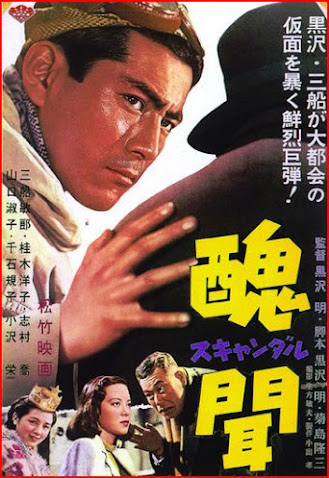 You sometimes hear it said about Akira Kurosawa that, as a Japanese director, he somehow wasn't Japanese enough. Some critics feel they're not getting an authentically Japanese cultural experience from the country's most famous film director, at least when compared to peers like Ozu or Mizoguchi. I suppose Kurosawa was a more cosmopolitan artist. He's arguably one of cinema's great Shakespeareans without having filmed a word the Bard wrote, and he based one of his best modern-dress pictures on an Ed McBain crime novel. A great Russian influence can't be discounted; he adapted stories by Dostoevsky and Gorky and made a film in the USSR when no one else would have him. This Russian influence is problematic, however. The film he made in Russia, Dersu Uzala, is great, but his Dostoevsky film, The Idiot, is one of his worst. Scandal may be worse still, and while it's no literary adaptation, the Dostoevsky influence is partly to blame. If I sum the thing up as half Dostoevsky, half Capracorn, you might consider yourself warned.

Released just months before Rashomon, Scandal is, among other things, Kurosawa's Christmas movie. No holiday movie anthology is really complete without Toshiro Mifune delivering a Christmas tree on his motorcycle or Takashi Shimura drunkenly shouting, in English, "Merry Christmas, Everybody!" But in mentioning all this I get ahead of myself. We should start with Mifune as a young, cranky artist. "I paint the mountains I see inside me!" he explains gruffly when kibitzing peasants note that the mountain he's painting isn't really red. A gentleman as well as an artist, he agrees to take a young woman who's missed her bus to her inn, where he has a room, on his motorcycle. He doesn't know that she's a popular singer (the late Shirley Yamaguchi of Samuel Fuller's House of Bamboo) being trailed by paparazzi before Fellini coined a word to describe them. They stake out the inn until they catch our hero paying a purely friendly visit to the singer. He's just had a bath and drapes his bath towel on the wooden balcony alongside hers. With both people in their bathrobes it's a provocative shot the photogs quickly sell to Amour magazine, an aggressively-advertised scandal sheet that tags Aoye the painter as Saijo the singer's new boyfriend.

Scandal is Capracorn insofar as Aoye is a reluctant, angry sort of "Cinderella Man" who reacts to embarrassing publicity as a Frank Capra hero might. He visits the Amour office, browses through the damning issue, asks who the publisher is, and punches him in the face. His honor isn't satisfied, however, so he does what any Japanese man would do: sue 'em! In this he's encouraged by an unencouraging attorney, Mr. Hiruta (Shimura), who impresses our hero by having a consumptive daughter on the classic 19th century model. Hiruta quickly appears to angle for an out-of-court settlement but is almost immediately flipped by the domineering Amour publisher, who'll feed the shyster's bicycle-race gambling habit if he throws the case and assures the magazine's acquittal. As Hiruta, Shimura takes over the film and sinks it. The lawyer is a Dostoevskian figure, self-consciously, narcissistically abject. "He's not bad, he's just weak," his wise, doomed daughter says of him, and his self-loathing is so nakedly obvious that his betrayal becomes transparent from the beginning. Too dumb to be tricky, he's merely mute and downcast when he should at least be pretending to win the case for his client. Friends and family suspect him immediately but pity more than despise him.

The film's Christmas aspect has inspired suspicion of a further Capra influence but the drunken holiday party Aoye and Hiruta attend seems as much a Dostoevskian occasion at which society's losers look forward to a new year and another chance to get things right while getting plastered for the present. It's indisputably not Capracorn when Hiruta's daughter dies; it may be more Dickens than Dostoevsky in its pathetic quality. This tragedy starts the film's final turn, as at the last possible moment Hiruta mans up, confesses his malpractice and incriminates the publisher. Given the way Shimura had been dominating the picture, I expected a courtroom climax of Hollywood hysterics; surely this was the moment for the actor to go full Barrymore, for the character to orate to redemptive death. Instead, he does the bare minimum to salvage the case, and now that I've thought it over this seems more Capraesque. If the Mifune character is the film's cinderella-man protagonist, than Hiruta is Senator Payne to Mifune's Senator Smith, and his redemption must come in an abrupt confession rather than, say, the fatal aria of A Free Soul. Still, since by this point I wished Hiruta dead it was quite anticlimactic and a leaden finish to what had started as a snappy satire, only to be sabotaged by Kurosawa's ill-digested blend of cultural influences. He probably had to get it out of his system before moving on to his next film and global fame.
Posted by Samuel Wilson at 10:36 PM