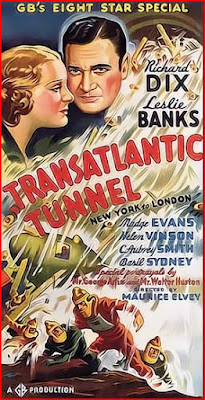 Known in Great Britain simply as The Tunnel, Maurice Elvey's film may be the first of its kind in one respect. It's the first film I can think of that hires a star actor for the cameo role of an anonymous President of the United States. Not only does it use Walter Huston, who had already played presidents at least twice on film -- Abraham Lincoln in D.W. Griffith's biopic of that name and a divinely-guided corpse in the megalomaniacal Gabriel Over the White House -- but it also enlists Mr. George Arliss, who had already won an Oscar playing such a person, as an anonymous, monocled Prime Minister of England. These men have easy jobs since their roles can hardly be called characters; they are only ever seen delivering speeches, and one wonders whether they had to bother memorizing anything.

Tunnel is very much like the sort of crisis film in which some famous actor as The President was touted as an extra added attraction. It has a premise that probably was obsolete when this picture, set sometime after 1940, was made: that ties between the U.S. and U.K., commercial and otherwise, could be strengthened by running a tunnel across the North Atlantic. The benefits of doing this as opposed to developing air travel are never really weighed, but nevertheless the Anglo-American team of engineer Mack McAllan (Richard "Cimarron" Dix), who has invented a new type steel for tunnel construction, and inventor Robbie Robbins (Leslie "The Most Dangerous Game" Banks), whose "radium drill" will cut the tunnel, manage to convince a small coteries of millionaires to bankroll their project. Disasters public and private ensue as Mack grows estranged from his wife and son, leaving his chaste chum Robbie to be their go-between, and the tunnel hits various snags, most dangerously an undersea volcano in its path. One can easily believe that Richard Dix could grow too preoccupied with mechanical tasks for family or any emotional ties, even if he's hardly more convincing as an engineer than Lon Chaney Jr. was in The Wolf Man. A nerd in the body of a lummox, Mack is first seen frantically scribbling figures while a very exclusive audience attends to a private performance by a symphony orchestra. Shortly thereafter he is seen tugging at the tight collar of his monkey suit like the oaf he appears to be. Yet women throw themselves at him, and Mrs. Mack (Madge Evans) truly resents his absence. She shows her resentment by taking a nursing job in the tunnel project's infirmary. Just as we learn that tunnel gases can cause blindness, she goes blind. The son, grown up over the years of construction (Jimmy Hanley), takes a tunnel job to prove his manhood to himself and his distant dad. He dies. There's also an attempt by a financier's daughter to lure Mack into marriage, an attempt by a munitions magnate to gain control of the tunnel company for who knows what purpose, and the looming threat of the Eastern Federation of Powers, which may exploit any failure of the tunnel project to make its move for world domination.

Through it all Mack and Robbie endeavor to persevere, and in spite of everything Mack and his Mrs. are reunited for the opening ceremonies, presided over by an invisibly Jesus-like "Ruler of the British Empire." It sounds more like a prototype for disaster movies than a pioneer sci-fi film (Britain had the lead over the U.S. in this race, with Things To Come still to come that decade), but as sci-fi Tunnel boasts some impressive sets and special effects, though some of these are reportedly borrowed from a German film based on the same (German) source novel. Interesting, Bernhard Kellerman's 1913 Der Tunnel  proves to be more prescient than the 1935 movie; it concludes with air travel having made the transatlantic tunnel instantly obsolete.
Posted by Samuel Wilson at 7:15 PM