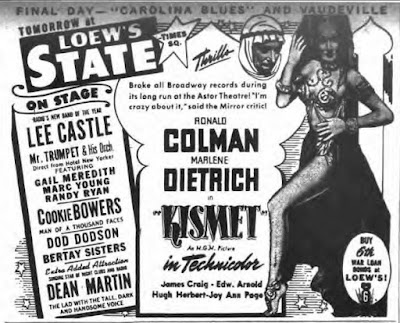 The 1940 version of The Thief of Bagdad should go down as one of the most influential movies of the Classic Hollywood era, if you judge by the wave of Technicolor Arabian Nights style pictures made in the following years.The best known of these nowadays are the Universal films featuring Maria Montez, Jon Hall and Sabu, which are considered models of camp moviemaking. Metro-Goldwyn-Mayer got into the game with a lavish remake of a now-lost 1930 Warner Bros. picture, itself a remake of a 1920 silent adaptation of Edward Knoblock's 1911 play. The lead role of Hafiz, the king of beggars in old Bagdad, must have seemed a natural for Ronald Colman to anyone who had seen him in If I Were King a few years earlier. There's something Chaplinesque about the idea of someone as indisguisably refined and irrepressibly arrogant as Colman playing a sort of heroic gentleman tramp. "I may be dirt to the caliph," Hafiz proclaims, "But to dirt I am the caliph!" It helps that Hafiz lives in a milieu where everyone talks in what we think of as an "Arabian Nights" style of florid rhetoric. It also helps that medieval Bagdad, which should be a totalitarian dystopia in the Islamophobic imagination of the 21st century, was seen for much of the 20th century as a fairy-tale land of sudden social mobility and fluid identity. Not only can Hafiz put on good clothes and pretend to be a prince, but an actual prince -- the caliph, in fact (James Craig) -- can put on humble clothes and mingle with the common people, pretending to be one of them. As the young ruler falls in love with Hafiz's daughter (Joy Ann Page), raised by her father in something like bourgeois respectability, Hafiz becomes embroiled in a plot against the caliph's life, masterminded by the typically treacherous grand vizier (Edward Arnold).

The producers must have known that screenwriter John Meehan and director William Dieterle would have difficulty explaining the power structure of old Bagdad, where there is not only a caliph but a queen. The Macedonian Jamilla (Marlene Dietrich) is neither the caliph's wife nor his mother, but is "queen" by virtue of her primacy in a harem that belongs to the grand vizier, not the caliph. Since the caliph is our juvenile romantic lead, he must be portrayed as monogamous, despite his entitlement to four wives and many more concubines. In any event, this "queen" business left me wondering whether the regal title was a stipulation of Dietrich's contract to appear in the picture. While Colman is billed above her (and the title), Dietrich generated much of the publicity with a dance scene in which her bare legs are painted gold. Dietrich wasn't much of a dancer, but the audience presumably got its money's worth as long as she showed those trademark legs. Anyway, I don't know whether we're to understand that as queen of the harem Jamilla is the grand vizier's wife, but it's a moot point since she's having an affair with Hafiz. As for Edward Arnold, I have to remind myself that the avuncular, chortling scoundrel he plays here really was a typical performance for him, while his great work for Frank Capra, who progressively drained Arnold of all humor and emotion to make him more of a menace, was the exceptional. And speaking of ill-utilized character actors, Hugh Herbert and Hobart Cavanaugh show up as Hafiz's supposed comedy-relief sidekicks, and they made me wonder whether Metro didn't originally have Laurel and Hardy in mind for those parts, until they realized that the characters didn't have enough to do to justify that casting. For that matter, a handful of songs here suggest that this Kismet once was meant to be a full-scale musical of the sort M-G-M got around to filming a decade later, after some musical plagiarists on Broadway ("I'm sure you recognize this lovely theme, A Stranger in Paradise...") wrote the songs for them. Cedric Gibbons' massive production design is more reminiscent of the 1924 Douglas Fairbanks/Raoul Walsh Thief of Bagdad than the 1940 film, but Technicolor garishness takes much of the magic away.  When all is said and done, Colman's character ends up much as his Francois Villon did in If I Were King: exiled from his beloved city, but consoled by his beloved woman. In many respects, the 1944 Kismet seems half-finished or ill thought-out, but the ending marks it as a Ronald Colman vehicle more than anything else.
Posted by Samuel Wilson at 6:23 PM