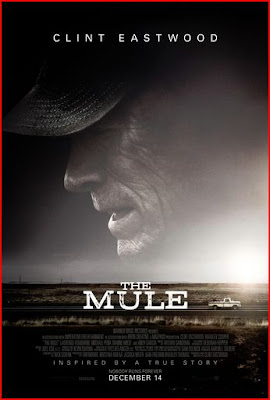 If any recent film has opened under an omen, it's this one. On Opening Day, December 14, it was reported that Sondra Locke had died. Going in, I had to wonder how Clint Eastwood felt at hearing that news. Coming out, I really had to wonder, for life, or its opposite, now seemed to imitate art. I now understand that Locke died last month, so on top of everything else you have to wonder whether her family waited for that day. Did they know what was in the film? To spoil things, a major turning point in the story comes when the Eastwood character learns that his former wife (Dianne Wiest) is terminally ill. At tremendous personal risk, he diverges from his assigned course to be with her, to apologize if not atone for being a lousy husband and father. He receives her forgiveness and is reassured of her love in her dying moments. The family subplot has probably the worst of The Mule's writing but it may have been what appealed most to Eastwood about the screenplay, apart from the core story's basis in fact. Clint Eastwood has been making "last films" for at least a quarter century now, beginning with Unforgiven. His most recent "last film" was Gran Torino -- written, like The Mule, by Nick Schenk -- but while the earlier film was a final statement of sorts on Eastwood's film persona, the new film aspires, seemingly, to say something about Clint Eastwood the man, particularly his poor record as a family man, implicitly including his treatment of Sondra Locke, through a fictionalized version of the criminal career of Leo Sharp, a World War II veteran, horticulturalist and excellent driver who, when down on his luck, hired out as a drug mule for a Mexican drug cartel.  Eastwood and Schenk change the name to Earl Stone but keep the vocation the same while elaborating imaginatively on the mule's motivation. Here, Earl wants to make money to make up for disappointing his family so often, but his apparent indifferent to how he makes the money, even after he verifies what must have been obvious from the start, suggests that he's changed less than he claims. The problem with Earl Stone, we're told, is that he prefers to live "in the moment" outside the sphere of home and family. Work, whether it's growing prize flowers or running drugs, is life to him more than home and family ever were. When he was home, he says, he wanted to get back out in the world, and one can't help suspecting that making movies means something similar to Clint Eastwood, which is why he's made two films this year at the age of 88. The Mule may be his confession, not necessarily that he has no life outside of movies, but that he didn't have as much of a life as he could have or, arguably, should have.

Yet The Mule is as much a vanity project as a confessional, though the two aren't necessarily contradictory. Split the difference and call it one of Eastwood's most narcissistic pictures. He's reached a point at last when he's undeniably frail, though apparently healthy; any fantasy of Eastwood overcoming younger antagonists is no longer plausible. Nevertheless, and regardless of whatever Leo Sharp felt during his misadventures, Eastwood's Earl Stone never shows fear, veers between stoic and smartass except when dealing with family, and gets to cavort, so to speak, shirtless with topless women as a guest of honor at a cartel party. Perhaps because he's so plainly frail now, Eastwood seems to feel a greater need to reaffirm his virility than we've seen in past films. The main thing he wants to reaffirm, or perhaps prove once and for all to skeptics, is that he can act. The Mule is Oscar bait, its primary goal, apart from getting the bad taste of The 15:17 to Paris out of people's mouths, is to give Eastwood one more chance at a vindicating Best Actor award. Unfortunately, while he's loosened up a lot and is often quite natural and funny, he still can't do much with Schenk's bluntly on-the-nose dialogue in the family scenes. Overall, his performance may contribute to uncertainty about the tone of the picture. People, I think, were prepared to see this as some sort of tragic commentary on socioeconomic modernity -- look what this war hero was reduced to! -- but it plays more like a mildly black comedy because Earl Stone doesn't take his situation very seriously and seemingly would rather take nothing too seriously. When he feels guilty, it's all about his family and not in the least about running drugs. Eastwood probably would rather not have his character seen as a victim of anything other than changing times, and in its own way the film is very much about personal responsibility in the conservative sense of the term. Within his thespian limits, he gives a subtle performance that easily could be seen as a shallow one.

Social commentary is inescapable, however. Earl Stone's flower business is ruined, so he thinks, by the internet, and his downward spiral is accelerated by the logic of the bottom line. This becomes most obvious on the cartel side of the story. Earl is initially an object of amusement if not contempt by the cartel gangbangers, but his easygoing zero-fucks-given attitude and some quick thinking in a pinch eventually earns the criminals' admiration, to the point when the big boss (Andy Garcia) invites him to his big decadent party. Soon enough, however, a new regime takes over, eliminating the old boss because he'd become too "lenient." What the new boss demands, above all, is efficiency and the strictest time management, with the slightest deviance punishable by death. It's just a slightly exaggerated metaphor for the modern job market, or will seem that way to some viewers. Earl's success as a mule is a commentary unto itself.  He's recruited not only for his perfect driving record, but because he, as an elderly white man, is one of the least likely people to be profiled as he drives around the country. The wisdom of his recruitment is demonstrated in scenes when plodding DEA agents (played with deceptive efficiency by Bradley Cooper and Michael Pena) reflexively profile after getting tipped off about a mule driving a black pickup. In one awkward scene, they pull over a hispanic-looking man who speaks no Spanish and frets loudly about the danger he's in. Later, staking out a motel where Earl is staying overnight, they see virtually everyone else there as their likely suspect. It all appears to prove a point against profiling; organized crime will respond to it by recruiting contrary to the profile. It's the same logic that makes the earlier cartel bosses indulgent toward Earl's eccentricities; his unpredictability will make him more difficult to track down. As Earl falls through the cracks in society, he can slip through some as well. In the end, though, The Mule is only superficially a crime film. It's more a character study than social commentary, though the latter often can reinforce the former. Good as it often is, it's not top-tier Eastwood but it'll be of lasting interest to auteurists for what it seems to try to say about the ultimate actor-turned-auteur of our time.
Posted by Samuel Wilson at 9:10 PM