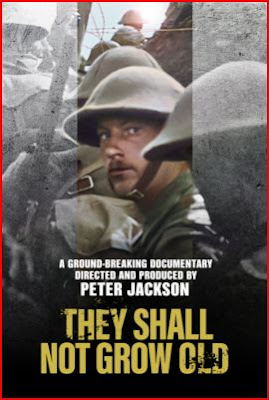 Back in the 1980s, a TV commercial promoting colorized movies quoted a random woman justifying the project on the ground that "we live in color." Peter Jackson's rationale for his colorization of documentary footage from World War I is basically the same; it could be summed up as "they lived in color." In a making-of short, Jackson makes the valid point that colorization, in this case, violates no one's artistic intentions; the original filmmakers certainly would have worked in color had it been available to them. Jackson has done more than colorize the footage. He used modern software to adjust the speed of the erratically hand-cranked films so that the soldiers filmed a century ago move with virtually the smoothness of people filmed today. His goal was to make the war footage look as if it was filmed yesterday, going so far as to fill in dialogue when lip reading -- or, in one case, some impressive scholarly research -- is possible. The results are inevitably mixed. That's partly due to the varying quality of source film, some of which can only be smoothed out so far. Colorization itself remains imperfect, or else it remains a painstaking process that sometimes requires more time or resources than Jackson could expend while meeting his implicit deadline of last year's Armistice centennial. His colorized footage is sometimes very close to the mark, and sometimes it reminds me of the limited palette of early Technicolor. While Jackson notes that grass was a particular challenge, he could have said the same about hair, with which his team had less success. Sometimes the footage still has the stencil-ish look of bad colorization from the early days of home video, but most of the time the results look better than that.

While Jackson colorizes out of a commitment to retrospective realism, the results can still be jarring on aesthetic grounds to people who identify World War I with the grim monotones of canonical fiction films like All Quiet on the Western Front (1930) and Paths of Glory (1957). Films like those encourage a view of the Great War as a nuclear winter of blasted landscapes and exiled sunshine before the thing itself could be imagined. In a way, Jackson's commitment to restoring the World War I landscape to what it looked like to the soldiers is a kind of corrective to the implicit expressionism of Lewis Milestone, Stanley Kubrick, their cinematographers and others. It's additionally ironic to contrast Jackson's portrayal of the war with the explicit expressionism of the recent J.R.R. Tolkien biopic that portrays the Great War battlefield as an  inspiration for the doom-laden fantasy world so vividly visualized by Peter Jackson.

Given the heritage of World War I on film, the most surprising thing about They Shall Not Grow Old is that it is not an anti-war film. It isn't really a pro-war film, either -- it's almost impossible to imagine any World War I movie as such -- but it's not intended as Jackson's commentary on the war or its horrors. Pointedly, the script consists only of oral-history testimony from veterans collected by the Imperial War Museum. That decision leaves the politics of the war out almost entirely. It also leaves out the usual question of whether the war was worth fighting. Whatever Jackson may think, he doesn't treat this project as his opportunity to editorialize on the subject. That doesn't mean there's no auteurial presence at all, however. There's a degree of showmanship involved as he makes the audience wait for the colorized footage to fill the wide screen. His initial use of the old black and white footage in its original aspect ratio seems inspired by the prologue to This Is Cinerama, building up to an ideally similar ooh-ahh reveal.  In black and white and in color, Jackson tries to reconstruct as generic a soldiering experience as possible, from enlistment to baptism of fire, with strong emphasis on the discomforts and compensating camaraderie of trench warfare. Perhaps tellingly, the generic battle imagined from testimony and rare documentary footage is a victory for British forces, rather than the typical episode of existential futility from canonical fiction films -- among which, it might be observed, British films are relatively rare. Jackson's directorial decision makes some historic sense, since Britain did win the war, but the fact of victory never stopped filmmakers from the winning nations from emphasizing the negative. Perhaps because Jackson's is a commissioned film, it largely eschews the sort of introspection and regret we expect from World War I movies while implicitly claiming to represent an actual consensus of soldierly experience.

By no means, of course, is Jackson hiding the horrors of the Great War. Leave it to him to earn an R rating for a documentary compiled from century-old film precisely because he lingers on luridly colorized footage of corpses. The rating also has something to do with his unique emphasis on soldiers' bodily functions. Some of the still photos of bare-assed soldiers filling open-air privy benches may well have never been seen before by the moviegoing public.  The overall effect is closer to Rabelaisian than tragic, taking the bare bums and gore as a whole, but with no mockery or satire intended. Folkloric might be a better word, since it aspires to convey the experience of the common rather than the uncommonly sensitive soldier. Whatever your word for it, approving or critical, and leaving your aesthetic judgment of the colorization aside, Jackson has succeeded at least at his presumed minimal goal of making World War I look different than our movie-influenced collective memory of it.
Posted by Samuel Wilson at 3:34 PM

"Such a smashing display of human anatomy." That line made me shudder so hard.