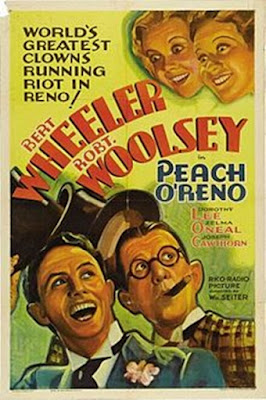 Indignant Matron: How can you look me in the face?
Robert Woolsey: Well, I guess I've gotten used to it.

---
Once upon a time, Reno NV was the divorce capital of the United States. It was a resort town where people stayed for the minimal period that made them eligible for a divorce under Nevada law as of the early 1930s. Gambling had been made legal in the state around the same time, and the combination of easy divorce and the promise of easy money made Reno "the biggest little city in America." It was an almost inevitable destination for Bert Wheeler and Robert Woolsey, as directed this time by William A. Seiter. I was growing used to a Wheeler and Woolsey formula that starts them off as desperate transients living by their wits, i.e. not particularly well until an improbable opportunity enables Woolsey to flex his con-man -- er, I mean entrepreneurial muscles. Peach O'Reno skips the origin stage to present our heroes, here calling themselves Wattles and Swift, as established, aggressively entrepreneurial divorce lawyers. In the fantasy land of Reno, their bustling office, staffed by girls in bellhop livery, transforms into a casino, the girls stripping down (and almost going overboard until ordered to halt) into skimpy waitress costumes. The transformation sight gags make Peach of a piece with RKO's contemporary cartoonishly absurd musical comedies like Melody Cruise and Down to Their Last Yacht and it all makes me wonder how Wheeler and Woolsey never crossed paths with Astaire and Rogers at their shared studio. We can ponder that another time. For now, know that Wattles and Swift's aggressive business practices have made bitter enemies of the more established firm of Jackson, Jackson, Jackson and Jackson, one of whom arranges for his election as a judge in order to thwart their rivals, regardless of the self-evident conflict of interests. Worse, their success as divorce lawyers has made Wattles, at least, a mortal enemy in the rancher and gambler Ace Crosby (Mitchell Harris). He appears in Reno as Wattles and Swift take on the case, one on each side, of Mr. and Mrs. Joseph Bruno, who are determined to separate after a bitter fight at their silver anniversary party. Their daughters hope to prevent the breakup; one of them, inevitably, is Wheeler's regular song-and-dance partner Dorothy Lee.

To secure a divorce, Wattles and Swift must provide evidence of unfaithful correspondence; their clients must catch their spouses with companions of the opposite sex. Somehow Mrs. Bruno (Cora Witherspoon) is hooked up with Crosby the gambler, while Mr. Bruno (Joseph Cawthorn) is attached to a cross-dressing Wattles, whose coquettish ways attract the worrisome attention of Crosby. This is a great film if you want to see Bert Wheeler in drag, and it'll also make you reflect on how poor a shot a westerner can be. Once Crosby figures out Wattles' disguise, a bullet-proof vest saves the lawyer from an early demise, but he then makes the mistake of taking off his vest and walking out of the death-chamber before Crosby is safely out of the casino. Crosby resumes fire at near point-blank range, always aiming for the ass as you do in comedies, but always manages to miss the crawling, scurrying Wattles until the police collect him. That leaves the big divorce trial, at which point the filmmakers lose track of the narrative. Judge Jackson (Sam Hardy) presides, but rather than sabotage the lawyers he seems perfectly content, if not outright amused, to play his part in a vaudeville sketch, alongside the jurors and an intrusive radio announcer. No matter: this is the sort of film where a divorcing couple thinks better of their plans at the last minute and fall sobbing into each other's arms. Not only are they reunited, but they now have sons-in-law in Wattles and Swift. It lacks the anarchic edge of Wheeler and Woolsey's most outrageous films but Peach O'Reno is amiable enough and if you like the RKO team as a matter of habit you'll definitely like them here.
Posted by Samuel Wilson at 8:45 PM