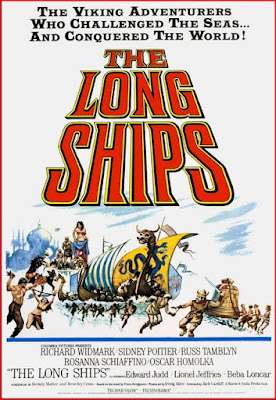 Richard Fleischer's The Vikings (1958) inspired a cycle of Viking films in Europe, including two by Mario Bava, but U.S. audiences apparently had seen enough the first time. Jack Cardiff's The Long Ships, a British-Yugoslavian co-production boasting Hollywood stars, was enough of a bomb at the U.S. box office to earn a mention in the Medved brothers' Hollywood Hall of Shame book. It's perhaps the most eccentric item in Sidney Poitier's filmography: a rare if not sole outing as a villain, reportedly ballyhooed as his first "non-Negro" role. He plays a Moorish ruler, al-Mansuh, who covets a legendary golden bell forged by Christian monks generations earlier. A storytelling beggar in his territory, Rolfe (Richard Widmark), claims to know where the bell can be found. Rolfe boasts of his Viking credentials, but you might share al-Mansuh's skepticism when this clean-shaven man throws off his robes to reveal the vest and shorts that supposedly serve as his bona fides. Chased from the territory, Rolfe appears to swim all the way back home to Norse-land, to reunite with his brother Orm (the actual protagonist of Frans Bengtsson's source novel, played by Russ Tamblyn, also clean-shaven) and his troubled lord and father (Oscar Homolka in comedy relief). The bell story gets him a crew who help him steal the longship dad had just handed over to his overlord, King Harald (Clifford Evans). While Rolfe has been built up as a rogue if not an outright liar, it turns out that he does know where the bell can be found, but he doesn't quite know how to land his ship in the right location. Wrecked in a whirlpool, he and his men fall into al-Mansuh's hands, but the lure of gold convinces the Moor to build Rolfe a fresh ship for one more try at the bell. If he fails, Rolfe and his men will have to ride the steel mare, and one doesn't do that and live to tell about it....

Poitier as a Moor with Widmark as his antagonist can't help making you wonder what they could have done as Othello and Iago. That seems more in Widmark's line than the role of Rolfe. Widmark had a respectable range, encompassing irascible authority figures and psychopathic imbeciles, but he lacks the swashbuckling panache that Rolfe requires. Similarly, Poitier doesn't fully take advantage of this one great opportunity to go over the top, though he could be excused for thinking that his costumes and his pompadour wig had already done the work for him. Neither is awful, but neither is really up for the type of performance this story seems to need. Russ Tamblyn's dance background makes him more of an action-hero type, but he would have been better served by a more faithful filming of the novel. As an action film, The Long Ships is a mixed bag. There's a terribly shot battle on a beach in which Rolfe's Vikings throw a wave of spears at Moorish cavalry. Cardiff cuts to horses and men tumbling under the impact of apparently invisible missiles. On the other hand, a disastrous attempt to drag the great bell down from its perch atop a cliff is very well done, and as far as special effects are concerned the waterborne model work is mostly quite good.  The film veers in tone from tragic violence to dubiously broad comedy, e.g. the Viking's lusty invasion of al-Mansuh's harem and the general abuse of a comedy-relief eunuch. Overall, it's a more comical film than I remember from childhood viewings, and also somewhat better than my dim memories. But while it's the sort of thing I'm tempted to find inherently entertaining, I can also see why American audiences left it rather than taking it to heart.
Posted by Samuel Wilson at 6:38 PM