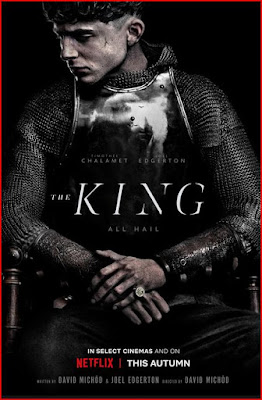 He may not play the title character, but the true auteur of David Michôd's history play may well be its co-producer, co-writer and co-star, Joel Edgerton. The King is an innately audacious project: a do-over of the story of King Henry V of England, the subject not only of Shakespeare's play but of two highly acclaimed films made from the play: Laurence Olivier's of 1944 and Kenneth Branagh's of 1989. Edgerton, however, has assigned himself perhaps the most audacious task of all: a dramatic makeover of one of Shakespeare's most beloved characters, Sir John Falstaff. That puts Michôd and The King on a collision course with Orson Welles' Chimes at Midnight on top of its other challenges. Edgerton himself may have written the film's most audacious line, in which his Falstaff compares the fate Michôd and Edgerton have planned for him with a more ignominious finish which is pretty much what Shakespeare gave the character, and declares the King version the better ending. Except that Edgerton to a great extend underplays the role, his conception of Falstaff is what you might imagine Marlon Brando doing with the character, albeit without that actor's dubious British accent. That is, Edgerton and Michôd make Falstaff the conscience if not the outright hero of their story. The fat knight's aversion to combat is here more a matter of principle than it is in the original, in keeping with the new film's overall antiwar stance. But then Falstaff is shown to be the author of the winning strategy of the Battle of Agincourt, staking his own life on it by leading a virtually-suicidal feint intended to goad the French enemy into an even-more suicidal cavalry charge against English longbowmen on muddy terrain. For what it's worth, this Falstaff is neglected for a time but never publicly shunned by his old pal Prince Hal (Timothee Chalamet), who later resents the fat knight's refusal to commit war crimes but respects his counsel too much to hold it long against him. To each his own Falstaff, of course; Welles, selectively following the letter of Shakespeare, still made the character largely a mirror of himself. If Michôd and Edgerton's Falstaff seems sometimes like a mirror-universe version of Shakespeare's, the core idea of their conception seems to be the traditional fool who can tell a king the truth -- something the writers feel that Henry V desperately needed to hear.

The King's Henry shares Falstaff's aversion to mass slaughter, but is dangerously sensitive to personal slights that threaten his standing as a new, young heir to a usurping father. That makes Henry even more dangerously susceptible to manipulation by war-seeking advisers, particularly the Poloniesque William Gascoigne (Sean Harris), who manufactures conspiracies against Henry to be blamed on France and expendable colleagues. It doesn't help matters that the French Dauphin (Robert Pattinson in a critic-proof performance as a complete idiot) wants to get into some kind of pissing contest with the new king, or at least wants to fart in his general direction. Falstaff and later the French princess Catherine (Lily-Rose Depp) act as Henry's conscience against the tide of war, constantly questioning the need for war and reinforcing his own instinctual skepticism, born of resentment of the belligerent ways of his father (Ben Mendelsohn). Henry's the type who prefers to settle things by single combat when possible, as he does with the archetypal Hotspur rather than see his own brother waste an army and his own life in a pointless battle. A nice touch in this film is the way it shows Henry becoming Hotspur, i.e. the son his father really wanted despite Hotspur's treason. Another touch is the way that character arc ends with a parody of the early Hotspur fight, as the Dauphin challenges Henry to single combat after the big battle -- Michôd acquits himself fairly well in the shadow of past auteurs, by the way, and Chalamet works hard in long, violent takes --  but can't put one armored foot in front of the other without sprawling into the mud. The film ends with Catherine replacing Falstaff as Henry's good conscience and his evil counselors done away with all too neatly. But while it's all too obvious when actors are mouthpieces for the writers' opinions rather than real characters, and the film is absolutely not to be taken seriously as history, The King is a nicely made piece of work and mostly quite entertaining, especially if you're a sucker for historical epics like I am. It's just too bad that as a self-conscious alternative to the Shakespearean "Henriad," it's doomed to comparison with greater films instead of facing judgment on its own terms.
Posted by Samuel Wilson at 6:24 PM

Email ThisBlogThis!Share to TwitterShare to FacebookShare to Pinterest
Labels: 2019, U.K.

I always enjoy watching that film on YouTube of the Czar Bomba 57 megaton device detonated by the Russians in October of 1961 because whenever i watch it i imagine its blowing up the British film industry ! ! !.