Back in 1995 I crossed the continent to visit Riverside, California, to serve as best man at a friend's wedding. I took in such sights as there were, most notably the theater where Gone With The Wind had its first preview showing. It seemed an ordinary, past-its-prime town, but I had little inkling of its secret history. For according to Frank Harris's movie, about a decade earlier Riverside was the murder capital of the United States.

The trouble began when a man in soldier's fatigues robbed a military arsenal of its guns and ammo. The perpetrator was "Nighthawk," the right-hand man of local crimelord Joe Marx (Cameron Mitchell). Nighthawk then carried out a daring attack on rival arms dealer Leo DeJulio in a crowded Chinese restaurant, instructing his men, "There should be no witnesses, and everyone has to die. Have fun." His orders were carried out; 15 people died in the eatery. 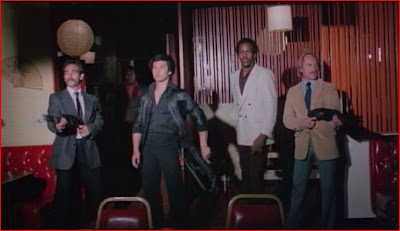 The ATF soon learned from Snake the snitch that Marx and Nighthawk were behind the robbery and the massacre. Agent Bryant (Richard Roundtree) was assigned to supervise the Riverside investigation. Capt. Skidmore of the Riverside PD, noting the stakes involved ("We think we've got a real problem with this thing.") assigned Lt. James Long (Leo Fong) as Bryant's liaison, despite reservations from ATF higher-ups. Wasn't Long the officer whose wife was raped and killed recently? Is he all right? "No, he's not all right. Would you be?" Skidmore told the Bureau, "But I'll tell you one thing. He's going to get the job done."

Nighthawk was soon handing out guns as if they were free samples. Gangbangers were soon shooting up grocery stores, bumping off another 15 people in one robbery. 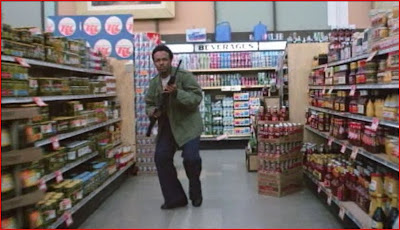 The film portrays Joe Marx watching news reports linking the two massacres and shooting his TV set. Marx had a love-hate relationship with his pet poodle, adoring the animal despite the fact that it "poos and pisses all over the living room." He fussed over the dog while arranging with his procuress, Anita, to have a new girl visit him. 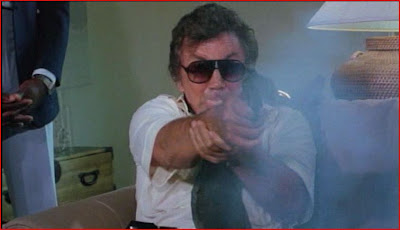 Candy is shown telling Marx, "This really isn't me....I'm really a singer." To which Marx responds, "Girly, when you know Joe Marx long enough, when this old son of a bitch tells you to sing, you better sing before I get physical with you. Sing! Anything!" The filmmakers believe that Candy's voice failed her due to nerves, and that when she refused to strip on Marx's order, he murdered her and had her body dumped in a river.

Lt. Long took over the murder investigation when the police learned that a burn mark on Candy's left breast matched the m.o. in an unsolved New Jersey homicide in which Joe Marx was a suspect. The autopsy clearly depressed Long, who is shown in a montage working out furiously, recalling his own dead wife, and staring into space. 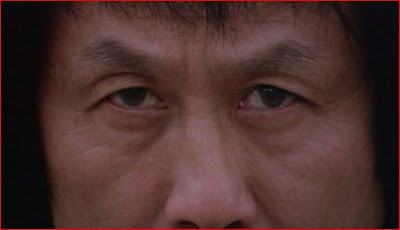 Having discovered Anita's address in Candy's home, Long interviewed her to no avail until he explained that Candy had been murdered. Anita then apparently went to Marx's home to denounce him as the gunrunner tried to feed his dog a cigarette. The song Cameron Mitchell sings is probably dramatic license.

Sparky is a friend of mine.
She will do it any time,
For a nickel or a dime.
Twenty cents for overtime.

The film contends that Anita's first guess was mistaken, and that Nighthawk killed Candy. It shows Anita wounding Nighthawk before he killed her, after which Marx complains, "Now you're bleeding all over my carpet!" Sparky is the dog, by the way.

As the investigation intensified, Long and Bryant pumped informants for new leads on the gunrunners. One likely prospect was gunned down in a tavern men's room before Long could meet with him. Nighthawk subsequently shot the gunman. Meanwhile, the gun trade continued, Nighthawk delivering arms to the Sanchez gang (with his lady chauffeur on hand for "insurance"), who subsequently massacred members of the rival Ramirez gang. 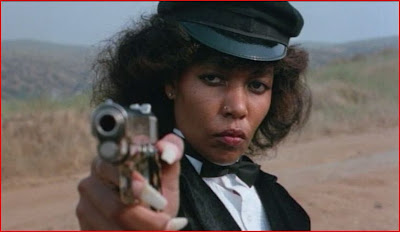 The first major break in the case came after Long kung-fued the snot out of the Sanchez crew and arrested their leader. After breaking up a gas station robbery by a black gang, the Riverside police played the gang leaders against each other, locking them in a bare cell to kung-fu one another until one is willing to rat out the arms dealers -- as long as the other is blamed. 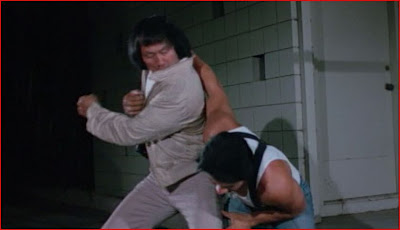 Using the fresh lead, Long arranged to meet Marx and Nighthawk, pretending to be an Asian gangster interested in rocket launchers. James Long's origins are unknown, but to account for Leo Fong's incongruous Southern accent, Long claims to come from Arkansas, where the China-born Fong was raised from the age of five. Long didn't realize when meeting with Nighthawk that the gunrunner had just killed Agent Bryant. It's an oddity of the film that Bryant dies without his liaison, Long, ever really taking notice of the fact. But there were more than enough ATF guys to go around in Riverside, even if Marx and Nighthawk wanted to start their own religion.

Marx suspected that Long might be a cop. He tested his theory by having four of his men beat Long up. He was satisfied of Long's good faith because "If you'd been a cop you'd have back-up all over the place." Paranoia, however, wasn't Marx's main problem. A breaking point came in his partnership with Nighthawk when Marx went berserk in a diner where the waitress kept a crying baby.


This apparently convinced Nighthawk that Marx was no longer a viable partner. He also had reason to think that Marx no longer trusted him, since the boss was wont to wander about talking to himself, saying such things as "From now on it's me alone, nuts or otherwise, against the whole world." Soon afterward, while picking Marx up in his limo, Nighthawk cut his mentor's throat. That left Nighthawk to consummate the big arms deal with Long, while the ATF surrounded the rendezvous point in an abandoned factory complex.... 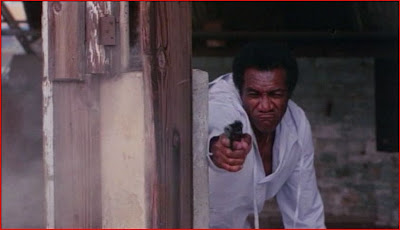 If Joe Marx didn't exist, Frank Harris and Cameron Mitchell would have to invent him. Mitchell gives one of his patented eccentric performances, fussing over the dog as much as he plots evil. But such is the quality of the man that Marx comes across as convincingly nutty, capable of completely unpredictable behavior. There's weird psychosexual tension between Marx and Nighthawk, whom Anita accuses of being gay. In turn, Nighthawk insults Marx while the boss wallows in a hot tub: "Look at you, wearing scarves, flowers in your hair, talking to a dog. Business going downhill and you're still turning into a raving faggot." Mitchell and Stack Pierce as Nighthawk make an effective team of misfits. Their interplay is the most entertaining thing about Killpoint apart from the sheer volume of gunplay that erupts every few minutes. This is a film that kills for the love of killing. Why does a criminal gang need to kill 15 random people in a grocery store? Because they're evil and the violence looks cool is my best guess.

Mitchell may steal the film, and Richard Roundtree may recede into the background for no good reason, but this is Leo Fong's show. The overaged (56 when this was filmed), mop-headed master of redneck style kung fu is a spectacle even if he couldn't act his way out a door. He spends a lot of time receiving very detailed orders from Capt. Skidmore, because taking the initiative might require him to open his mouth, and Director-Screenwriter Harris apparently wanted to delay the awful moment when Fong's accent revealed itself for as long as possible. Now, an Asian man has just as much right to a Southern accent as anyone else, but in Leo Fong's case it's just the icing on the cake that makes him an avatar of '80s bad taste. Only in that decade would anyone have thought of making him a star. 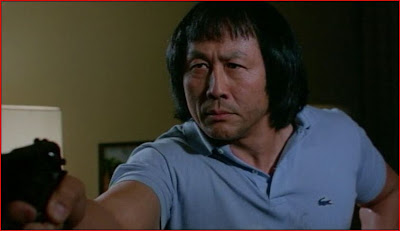 Harris is capable of creating dynamic moments, especially the grocery store attack, and he keeps things busy during the drawn-out climactic siege, crosscutting the ATF blasting thugs with Leo Fong going hand to hand with various foes until his showdown with Nighthawk. But there are also lots of flat moments of telephone conversations, pointless helicopter shots and instructions from the authentically dull Capt. Skidmore to pad out the picture. Throw in some convincing sleaze, some country music and a lot of bloody shirts and the end result is approximately 90 minutes of mindless action candy, Crown International Pictures style. You can find this one nicely letterboxed on BCI's Maximum Action set, which includes another Harris-Fong-Mitchell exploit, Low Blow. But if you want to see lots of people get shot, Killpoint should probably be your first stop in that collection.
Posted by Samuel Wilson at 12:06 AM

Yet another fuzzy movie memory from my youth that you've resurrected. I don't remember much about it, but I was pretty young when I saw it. I'm thankful to have been raised on late night cable as a kid and having oblivious parents.

I had no clue about the film before I discovered the Maximum Action set. The film's been written up in one of the Psychotronic volumes and in the Time Out Film Guide, so I'd clearly read about it at some point, but it didn't register as something to see. I didn't have the same appreciation of Cameron Mitchell and old-school action movies then that I do now.