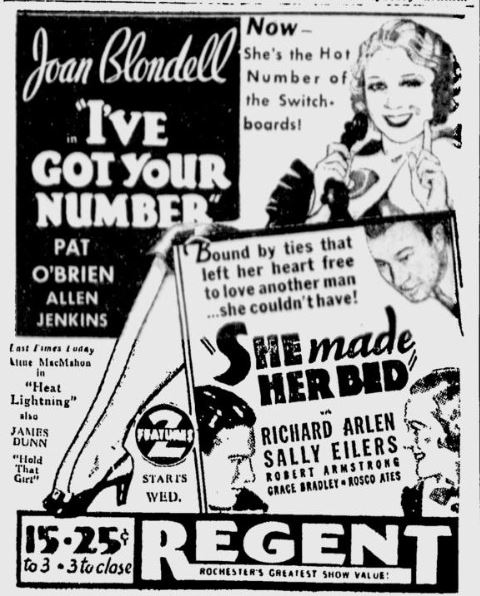 TCM ran this Ray Enright film as part of a Glenda Farrell day during last month's Summer Under the Stars festival, but she's only in two scenes. The stars are Pat O'Brien and Joan Blondell as, respectively, a telephone repairman (assisted by Allen Jenkins) and a hotel switchboard receptionist. Blondell is just one of the many women O'Brien and Jenkins meet in their daily adventures, which take them from immigrant tenements to posh whorehouses. I'm assuming about the latter, of course, but so would you if you saw the place and its languid, lingerie-clad tenants who flirt with O'Brien while Jenkins sulks. His partner gets impulses to strangle people, O'Brien explains, so he strangles himself instead. Their work is full of adventures. When a live wire falls across an occupied car during a fire, our hero cuts the power in time to save the driver's life. When he has to investigate someone monkeying with the wires at a particular home, he and Jenkins stumble onto Farrell's racket. She's a distaff version of Warren William's Mind Reader, a turbaned fake medium whose flunkies (including Louise Beavers, from "the southern part of Heaven") speak into an upstairs phone Farrell has hooked up with a loudspeaker so the spirits of the departed loved ones can talk to the suckers. O'Brien and Jenkins promptly break this up, but Farrell takes O'Brien to her room to beg for a break. When O'Brien comes out, Beavers is reading Jenkins's palm. It doesn't look good just then, but he ends up hooking up with Farrell, squiring her in an encore appearance when both show up drunk at a nightclub.

Meanwhile, Blondell (who shares no screen time or space with her soon-to-be partner in gold-digging) is a good little switchboard operator whose good-natured cooperation with an innocent seeming prank ends up implicating her in wiretapping. O'Brien conducts the investigation that costs Blondell her job. To make it up to her, he takes her out to dinner and arranges with the wealthy man he saved earlier, who promised to repay him sometime, to get Blondell a new job in his office. She proves a sucker for the same creep but gets wise just in time to give chase as the creep absconds with a stolen bond delivery. This sets up a two-fisted melodramatic finish that only proves that the film had to end sometime. The plot is pure B-grade but the breezy, sleazy tone of the first half elevates the film for a while. It's little more than a programmer but when a studio can program something like this with the Warner Bros. stock company it's bound to be entertaining regardless. Subsequent films on Glenda's day had more of her and were better for that. We'll take a look at a few more of them in the days to come. For now, here's the trailer for I've Got Your Number from the usual source:

Posted by Samuel Wilson at 7:21 PM