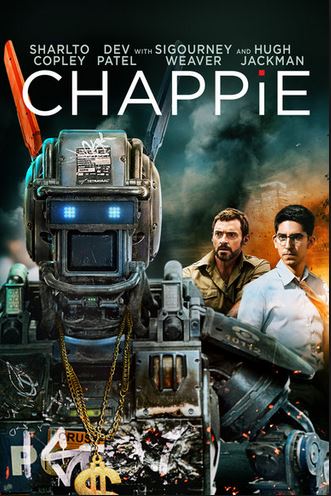 Neill Blomkamp's Chappie is one of the most archetypally dense films I've seen in a while. It pretty much touches all the bases of man-made life, from Frankenstein to Pinocchio to Robocop, yet manages to make a modestly original contribution of its own. I think it's a better riff on the Pinocchio myth than the vaunted Kubrick-Spielberg AI (2001) because of its incorporation of the other archetypes, all in one character, and because of the way it turns the Pinocchio idea on its head at the end. The film's Geppetto is Deon (Dev Patel), the creator for the Tetravaal corporation of a line of "scout" robots that assist police in fighting crime in day-after-tomorrow Johannesburg. Deon wants to develop artificial intelligence further, to create a robot that is itself creative. Since that doesn't really promise to pay, Deon has to pursue his project clandestinely, all the while being spied on by an envious rival (Hugh Jackman) promoting the Moose, a more ED-209 type unit. It's just Deon's luck that he and his creation are kidnapped by gangsters with day-glo guns who want to hack into a scout and turn it into a gangster robot. Ninja (Watkin Tudor "Ninja" Jones) and his expatriate buddy America (Jose Pablo Cantillo) are disappointed when Deon introduces them to a robot with the mind of a baby, but Ninja's moll Yo-Landi (Yo-Landi Visser) bonds with the poor frightened thing and calls it a "happy chappie." The new creature, adopting Chappie as its name, is hereafter torn by conflicting influences. "Creator" Deon wants it to act ethically and encourages its artistic potential whenever he can. "Daddy" Ninja wants to train it to be a badass criminal and distrusts Deon's influence as much as Deon does his. "Mommy" Yo-Landi almost instinctively feels that Chappie ought to be allowed to grow up as it wants.

Through a series of circumstances "Daddy" gets the upper hand despite his casual mistreatment of Chappie. He tips the balance his way when Chappie discovers his mortality. Deon installed his new AI software in a damaged scout limited to the life of its. current battery, and a horrified Chappie feels betrayed that Deon would create him only so he would die. Yo-Landi talks of the soul moving to another place at death, but Deon doubts that Chappie's software can transmigrate that way. But when Deon explains a stolen helmet the Jackman character uses to control the Moose, Chappie intuits that he could project his consciousness into another body if he can only crack the right codes. On this hope Ninja hangs a plan for Chappie to override his objection to heisting -- taught, not programmed, by Deon -- in order to earn the money for a new body. This only sets up another betrayal when Ninja admits, after the fact, that he lied about the availability of another body for Chappie, but by this point another gangster storms in demanding Chappie for himself, and Jackman's robot closes in with a mission to destroy Chappie and everyone else....

Blomkamp alter ego Sharlito Copley provided visual inspiration and voice for Chappie, while Jackman's grotesque hair and clothing suggest that he's playing a version of Sharlito Copley. Both actors were overshadowed, for many hostile reviewers, by the musicians Ninja and Yo-landi playing versions of themselves, but rather than being annoyed by their mannerisms I found them appropriately odd figures in the film's futuristic fairy-tale landscape. Meanwhile, Copley does a great job animating Chappie -- he's especially good portraying the robot's confused anger at his plight, which persists despite his learning at a rapid rate -- while Jackman delivers one of last year's most entertainingly loathsome villain turns. I think Chappie goes a little overboard in pursuit of a happy ending that not everyone in the film or watching it might find happy -- I was left wondering what Ninja and Yo-Landi would actually think of the destiny the film intends for the latter -- but I admired the integrity of the production and its commitment to big ideas in candy-coated form. It's a great comeback for Blomkamp after the disaster of Elysium and leaves him once again a figure to watch in the sci-fi action genre.
Posted by Samuel Wilson at 7:28 PM