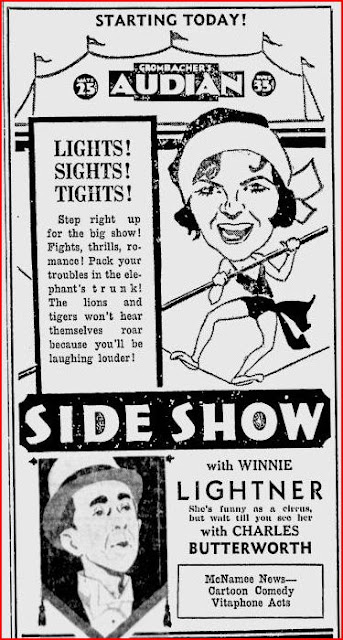 This Roy Del Ruth comedy has one of the most transgressive images in Pre-Code cinema, at least in retrospect. It's Winnie Lightner, Warner Bros.' musical-comedy heroine of early talkies, in both male drag and blackface playing a "Wild Man of Borneo" and looking alarmingly like a cartoon come to life, complete with top hat, grass skirt and oversized slap shoes. That was entertainment back in the day, and to be honest it's funny seeing her in the latest role this jill-of-all-work has to take on in her ongoing effort to keep Col. Gowdy's Big City Circus running, especially when the "Hey, Rube!" call goes out and she has to wade with her rubber club and help fend off rowdies trying to wreck the show. And before the mayhem breaks out there's a genuinely surreal moment when Charles Butterworth, playing a barker among his many circus roles, introduces her, promising an important announcement, his own top hat in hand. Butterworth drops the hat -- and it shatters, triggering a monologue of grunts from Lightner, after which she resumes smoking her cigar. I think I found it the more hilarious because it's appalling, and in story terms it illustrates the extremes Lightner will go to to save the circus. We've already seen her as a hula dancer, a living painter, a barker (in drag) and a (in moustache if not full drag) a "fire diver" who has to set herself on fire and dive from a high platform into a pool of fire. A stuntperson actually does this, which I mention not to disparage Lightner but simply to wonder that anyone does it. And yet a more spectacular stunt shot follows immediately. Butterworth's character, who pines after Lightner the whole picture, has followed her up the ladder to encourage her, and has stopped partway down the ladder to watch the dive. He applauds so enthusiastically that he falls off the ladder and joins Lightner in the pool. Again, a stuntman does this, by which I mean a stuntman does this, and Del Ruth gets a perfect shot from behind the stuntman on the ladder. This really is a nicely shot film (Devereaux Jennings was the cinematographer) with many spectacular shots, from the mass brawl at the circus to a scene in which Lightner chases some jerk into a passenger car on the circus train, pounding him with a pillow that explodes with feathers that fill the screen as her victim runs toward the camera. I read that this was one of those pictures that was cut to ribbons because it had been a full musical at the point when audiences had tired of the genre, so the songs had to go, but while Side Show is admittedly episodic it doesn't really strike me as a mutilated film.

Side Show describes the Lightner character's vocation and her self-image. Pat has sacrificed her own ambitions, both personal and professional, to prop up the drunkard Col. Gowdy (Guy Kibbee) and longs for a life and a man of her own. The man is Joe Palmer, and since he's played by Donald Cook, best known as Jimmy Cagney's damaged-vet brother in The Public Enemy, he doesn't seem that promising. Worse, once Pat's younger sister Irene (Evalyn Knapp) shows up, Joe falls for her and they eventually run off together. The film contrives a happy ending when Joe returns for Pat, having hooked Irene up with a younger guy, but I think we can indulge the contrivance, because Pat deserves a break after all she's gone through. She definitely doesn't deserve to end up with Sidney, the Butterworth character -- and I don't say that to disparage Butterworth, since I actually dig the actor. How to describe him. Physically, think of Stan Laurel as a bipolar version of Butterworth. In terms of personality, Butterworth is what Buster Keaton should have become in talkies. Butterworth was actually billed as a "dead-pan" comic a la Keaton, defined by an imperturbable absurdity. If the cuts to the film had any consequence, it was to give Butterworth more of an opportunity to steal the film from Lightner, but they actually make a neatly-contrasted comic team, his pixilated placidity balancing her manic antics. The best-such moment, and a runner-up for Pre-Code Moment of the picture, comes when Lightner, disguised as the disgruntled fire diver, is stopped on her way to the center ring by the local sheriff, who's on hand to make sure the circus doesn't defraud the public. He wants to chat with the diver but Lightner isn't going to risk imitating a foreign man's voice, so she lapses into a gibberish sign language with many conspicuous thrusts of fingers into hand-made holes. Butterworth translates: "He asks how's your home life." Butterworth has all kinds of small moments that get big laughs, just as Lightner gets big laughs with big moments. I could describe more but I don't want to overrate Side Show as a comic masterpiece. It is the first time I've really appreciated Lightner's brash versatility, which probably would have made her a huge star today. In her own time, Side Show already finds her past her peak of popularity. She retired in 1934, but there's a sort of happy ending, since she married Roy Del Ruth, who did right by her here and thereafter.
Posted by Samuel Wilson at 10:07 PM