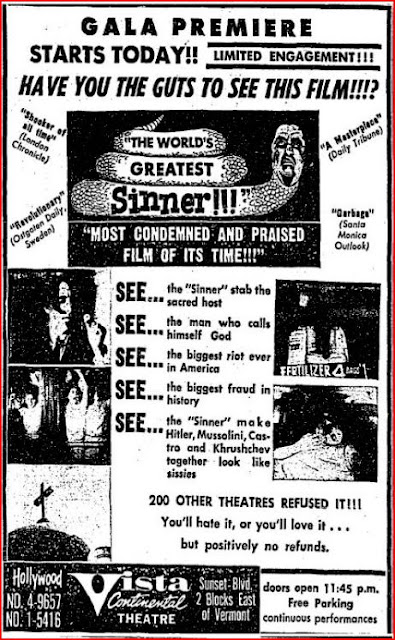 Timothy Carey may be best known to movie buffs as the tall crybaby French soldier doomed to execution in Stanley Kubrick's Paths of Glory. Some with different tastes may recall him as South Dakota Slim from the AIP beach party movies. Carey seems to have been some sort of crackpot, so it should come as no surprise that when he resolved to produce, write, direct, star in and distribute his own movie, it should be a film about a megalomaniac. Making the picture was a long act of pure will by the aspiring auteur, and its subject is a man who seeks to live and transform the world through sheer will. Clarence Hilliard is a sales manager for an insurance company, apparently happy with his bourgeois life with wife, daughter and horse, but the Devil (voiced by Paul Frees) is watching. Hilliard sells life insurance, but has grown tired of talking about death, tired of others thinking about death and building their lives around it. His mounting mania gets him fired, but that only frees him up to take up his new calling as a prophet preaching a new populist religion in which every man is a god, or at least a Super Human Being. Improbably, Hilliard builds a following preaching on the streets, drawing disciples with the promise that you can become a god by saying you are. Mesmerized by a rock concert, Hilliard reimagines himself as a "rock god" with a gold lame jacket, a fake soul patch and volcanic Elvis moves -- the shambolic Carey looks like he's going to erupt out of his clothes as he jackhammers across the stage to the music of Frank Zappa. Now that he's God Hilliard, the next natural thing is to run for President, promising to mobilize science and medicine to make Super Human Beings a reality. His appeals to the forgotten common man, uttered by a charlatan high on his own supply, have a fresh prophetic resonance now, nearly sixty years after Carey shot the film. Godhead has a price, however, as Hilliard's wife rebels against his divine ways with other women, young and old, and his apparent rejection of the real God. Hilliard doesn't want to be bothered by her petty protests, but he is bothered when she leaves him. Her departure provokes a crisis of faith in himself that can only be resolved by challenging the God of the Eucharist, incarnate in a consecrated wafer.

Just as in many a monster movie, holiness actually prevails, but it's hard, even in that light, to see Sinner as a tract against the demonic ambitions of God Hilliard. As in many monster movies, you're probably supposed to root for the monster, though Carey, admittedly charismatic in his own eccentric way, does everything in his power to make Hilliard repulsive. What's compulsive, and compelling, about the picture is how transparently the morality tale gives Timothy Carey a platform to act out on, to play the rock star, the preacher man, the demagogue. The World's Greatest Sinner is aueturism as shameless exhibitionism. It's one of cinema's greatest ego trips, though Carey tries to art it up in various ways that only emphasize his rawness as a filmmaker, e.g. leaving the reel ends in the finished (?) picture. Amateurish in many ways, it's elevated by Carey's own talent as a performer and by young Zappa's genuinely effective score -- though the great man dismissed the picture as "the world's worst movie." Somehow I don't think Carey took offense; it was a superlative after all, and it meant he had done something memorable.
Posted by Samuel Wilson at 10:26 PM