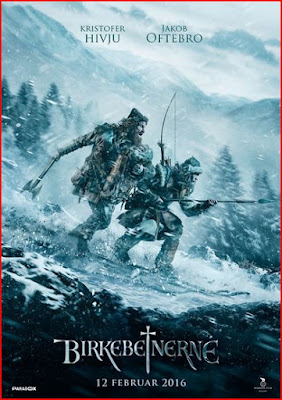 On the snowy slopes of thirteenth century Norway, warriors on skis must have traveled faster than any man could without the aid of a horse. Their speed lends a thrilling novelty to Nils Gaup's compact epic, which admirably gets a big job done in little more than 90 minutes. Gaup is on somewhat familiar ground, having made his name globally with the similarly set 1987 film Pathfinder. In Birkebeinerne (the Last King title doesn't seem relevant to the story) it's 1206 or thereabouts and Norway is torn between two powerful factions, the titular good guys ("birchlegs" in some translations) and the bad guy Baglers. For an outsider it's hard to tell what each party stands for, though there's an interesting anticlerical angle in the film's emphasis on the Baglers' alignment with the Vatican that's underscored by a Birkebeiner's scoffing attitude toward prayers over a wounded ally. Suffice it to say that the poisoning of a young king puts the Baglers' man in power, but a mere baby boy has a more legitimate claim. It's up to the Birkebeiners to keep the baby safe while they try to raise an army in his name. The child's location is confided to Skjerveld (Jakob Oftebro), but the Baglers are on to him. They threaten his wife and his own small child with death unless he confesses where the baby king has been hidden. Skjerveld cracks, only to be mocked by the Bagler commander for having less fortitude than his wife, whom the commander orders killed out of pure spite.

Skjerveld, aided by his buddy Torstein (Kristofer Hivju), now has a twofold mission of revenge for his family and redemption for himself. Only a Bagler attack saves him from execution after he admits his betrayal, but he and Torstein take the baby to the next safe house, with the big-bad Bagler commander in hot pursuit. The chase scenes are exhilarating in an almost anachronistic way, since we still expect James Bond, not some furry medieval man, doing this sort of thing.

Our heroes finally patch together a little army that should be enough to ambush the Baglers as they fall into a trap baited with the baby king on a sled. The movie exposes its budgetary limitations in the big attack, although I suppose that a mere handful of ski-jumping warriors could well wreak havoc on a conventional horseback army. In any event, the final battle is nicely plotted to set up a redemptive showdown between Skjerveld and the Bagler commander, the last of the one band of bad guys to escape the trap and threaten the little king. It's all based on fact, although I read that Norwegian historians unsurprisingly found the film's version of events oversimplified. Birkebeinerne is no masterpiece, but it's cool to get a decent action film that comes with a history lesson to broaden your knowledge of the wild world of cinema.
Posted by Samuel Wilson at 10:42 PM