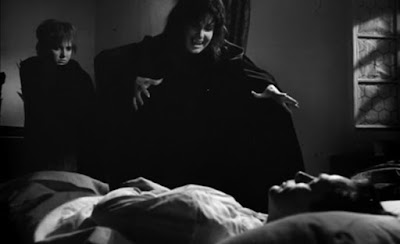 Hungarian director Akos Rathonyi filmed this German-Yugoslav production featuring a mostly German cast, along with African-American expatriate John Kitzmiller, who ends up being the most interesting thing about the film. Known as "The Curse of the Green Eyes" in its original language, the movie follows an Interpol inspector (Adrian Hoven) into a village where a serial killer seems to be at work. There's a lot of superstitious suspicion about the deaths of several young women, but the local doctor dismisses the twin puncture marks on the most recent victim's neck as "superficial scratches." The local witch tells a different story, urging Inspector Dorin to carry protection against vampirism. We soon find ourselves in a whoisit as a number of candidates for the role of the killer emerge, including the reclusive professor (Wolfgang Preiss) conducting blood experiments in an old castle, his lovely assistant, his black servant (Kitzmiller) and a belligerent deaf-mute (Emmerich Schrenk) -- and you can throw the aggressively skeptical doctor in, too, if you're in an expansive mood. Meanwhile, Dorin sleeps through a failed vampire attack thanks to the power of the cross, while a persistently disappearing corpse finally separates the doctor from his skepticism. 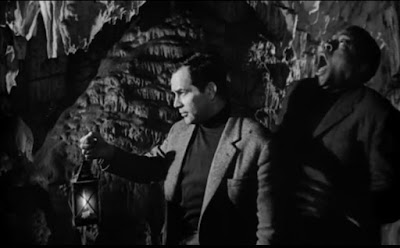 Unfortunately for anyone expecting suspense, the perpetrator's true identity isn't that hard to guess, and that lack of suspense only underscores the picture's overall lack of thrills or scares. That leaves only the admirable black and white cinematography by Hrvoje Saric and the subplot involving Kitzmiller's character to admire. It's unusual if not unique for a European vampire film to go off on a tangent about racism, but that's what Rathonyi and his co-writer do here. John, the black servant, serves as sort of a red herring for a while, if only because of his color. He faces in-you-face hatred from the mute, who tosses him out of a tavern despite the innkeeper's own tolearance, and even the witch, otherwise treated as a benign character, mistakes him for a monster when he happens to look into her window one night. The film tries a tricky balancing act, since John is thisclose to being the stereotypical scaredy-cat black servant, but it also shows us that John has real reason to worry, though not so much about the supernatural. This subplot could have been better integrated into the main story; the witch's prejudice might have undermined her credibility with the more cosmopolitan inspector, for instance, maybe making him less likely to adopt her safeguards. As it is it seems all too easy to vanquish the vampires once their lair and leader are identified, but I get the impression that the filmmakers may have seen all the undead stuff as a Macguffin enabling them to say something more interesting about small-town Mitteleuropa. Their message comes across as muddled or muffled, but it's hard to say whether the English dub accurately represents what the creators actually wanted to say. But since the U.S. release was sure to maximize the film's scare quotient, the lack of real scares in that version is pretty damning. Cave isn't a bad film to look at, but I wouldn't make it a high priority when you're scheduling horror movies for Halloween season.
Posted by Samuel Wilson at 5:29 PM