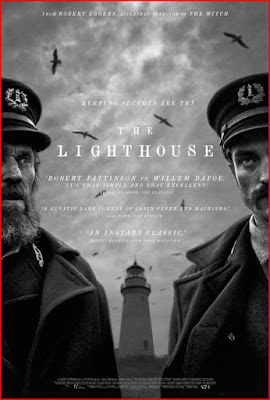 The sophomore jinx has hit Robert Eggers, whose feature-film debut was the rightly-acclaimed The Witch from 2015. His new film is another piece of period Americana, this time taking place in 19th century New England. Thomas Wake (Willem Dafoe) and his new assistant Ephraim Winslow (Robert Pattinson) arrive on an island for a four-week stint as keepers of its lighthouse. Wake is a vulgar, flatulent, superstitious drunk who drives Winslow relentlessly and tries to goad the apparent teetotaler into imbibing with him at dinnertime. On top of that, he forbids Winslow from entering the light of the lighthouse itself. Ephraim has issues of his own. A scrimshaw mermaid inspires him to masturbate frequently, while one particular seagull seems to make a point of getting in his way all the time. He's warned not to harm the bird -- Wake believes that seagulls harbor the souls of drowned sailors -- but the enraged Winslow finally takes the gull in hand and dashes him to pieces on a rock. As if by coincidence, a severe storm indefinitely delays the arrival of their replacements. If Wake had been somewhat mad before, Winslow quickly catches up with him....

The Lighthouse has no real subject other than madness, and madness as an end unto itself isn't firm ground to plant a film on. While in The Witch Eggers arguably was saying something about Puritanism, patriarchy, family, etc., in his new film the director (co-writing with his brother) seems more interested in evoking mood or genre. It may be wrong to ask what the point is, but viewers can hardly help doing so. The real problem may be that, at 110 minutes, the film is too long for its own good. The length tempts the Eggers brothers into too many self-indulgent twists as their characters struggle for dominance and deteriorate further into insanity. At one moment Wake is challenging Winslow's (and our) sense of reality by contradicting a version of recent events that we saw play out on screen as if it were objective truth. Not long afterward, Winslow has beaten Wake into such canine submission that he will walk, on a leash, into an open grave. But then Wake recalls himself and charges back inside for a perhaps-climactic attack. By this point both men have become so repellent that no rooting interest in either man is likely. No rooting interest is strictly necessary, to be fair, but by this point most viewers have probably lost hope at getting to the bottom of the whole situation. There seems to be no point to the exercise, or to the excellent black-and-white cinematography and production design, other than to have Dafoe and Pattinson act crazy. Dafoe is an old hand at this, but more eyes will be on Pattinson, whom we find at a pivotal point in his career. He is our next cinematic Batman, and by coincidence will have a high-profile role in Christopher Nolan's next film. By two years from now the ghost of Edward Cullen may be exorcised for good and Pattinson's real movie-star career will have begun. Will he be a respected actor by then? Some may argue that his work for David Cronenberg already should have earned him respect, but for most people the jury is still out or the memory of Twilight is still too strong. Can we see the future Pattinson here? He has deglamorized himself with an old-school moustache, several layers of grime and a slightly erratic character voice, while what might ungenerously have been called cow eyes a few years back are now capable of a penetrating gaze. Beyond that, it's hard to judge his interpretation of a character of whom his own author seems to lack a clear conception. We learn that Ephraim Winslow isn't what he initially introduced himself as, and the pressures of his situation further assail his sense of self, but neither Pattinson nor the Eggers brothers ultimately can give him the kind of empathetic reality that even characters in psychological horror films require. The problem isn't that we don't care what happens to him, but that we lose interest in the all too-protracted process.

While Eggers fails as a writer this time, he retains a strong directorial eye. Some of the best scenes are relatively simple but well-shot bits of Winslow struggling through his daily chores. If The Lighthouse feels ungrounded in other respects, it does feel grounded in a particular time and place. Strange as it may be to say, while panning this film I left it with the feeling that Eggers, with his firm sense of period and a visceral sensibility, might be the person to bring Cormac McCarthy's horrific western epic Blood Meridian to the screen. In other words, Lighthouse isn't the sort of disaster that exposes its auteur as some sort of fraud or one-trick pony. Instead, it's a failure that leaves much of Eggers' potential as a filmmaker intact, while leaving us hoping he'll find more critical collaborators next time.
Posted by Samuel Wilson at 7:09 PM