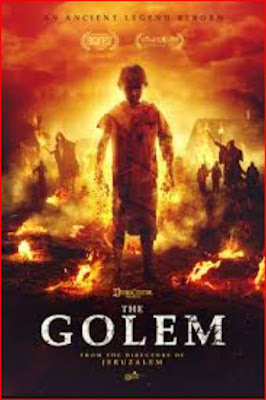 As portrayed by German actor Paul Wegener, the Golem was the first cinematic horror icon. Compared to other iconic monsters, there have been relatively few Golem films, the most notable in English being the 1967 film It! Now an Israeli film, with Doron and Yaov Paz directing Ariel Cohen's script, revives the legend, linking the lore of 17th century Prague with more modern concerns. In this account, a young girl witnesses the destruction of the Prague golem (and its creator) after it had massacred the congregation it was supposed to protect. A generation later, the girl has grown into a midwife and all-around wise woman in an embattled Jewish community in Lithuania. In this same village, Hanna (Hani Furstenburg), has a Yentl-like ambition to learn the Kabbala, volumes of which are smuggled to her in baskets. Hanna's son drowned some years ago and she's been barren ever since -- or so it seems. She's actually taking treatments to suppress pregnancy, but when nearby gentiles blame the Jews for a plague, and their leader threatens the midwife and the village with death if they fail to heal his daughter, Hanna suggests creating a golem for community defense. Against everyone's advice, she performs the ritual herself, but instead of the hulking entity Wegener played, or the shape we saw in the Prague sequence, her golem takes the fleshy form of a young boy, triggering a dangerous maternal instinct in his creator.

Cohen and the Paz brothers reshape the golem myth to fit their thematic concerns and genre ambitions. Hanna develops an empathetic relationship with her golem, feeling the pain it doesn't when it's attacked, while he turns his fury on people, both Jew and gentile, Hanna perceives as threats. When she's unconscious (or preoccupied with sex) the boy golem's own defense instincts kick in. Though the golem looks like a child, it remains a super-strong force of destruction, enabling some cheap and sometimes laughable gore effects. Since the filmmakers didn't have the means to show the boy fighting his enemies, those unfortunates usually get torn to pieces off-screen, their bloody limbs flying across the screen. Better still, this golem is a scanner, causing his foes' heads to explode without touching them. Meanwhile, Hanna goes through the "my precious boy can't be evil" denial arc before the golem's inevitable, indiscriminate attack on villagers and gentile attackers alike forces her to do the necessary thing. That undermines whatever feminist message or other commentary the filmmakers intended while reducing the golem legend to all-too-common horror tropes. The awkward mix of thematic ambition and genre crassness renders this golem film a disappointment and leaves this reader wishing that someone with real ambition and genius would put Marge Piercy's great golem novel (crosscut with science fiction) He, She and It on the big screen. Until then, however, there aren't so many golem movies that people shouldn't try again.
Posted by Samuel Wilson at 6:44 PM