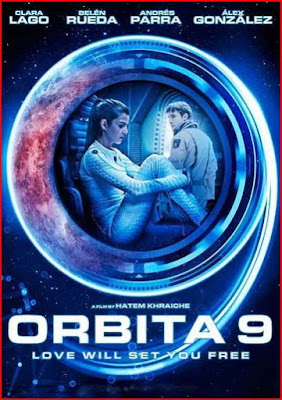 For an Anglophone moviegoer it's a novelty to see space exploration carried out in Spanish. This isn't some implausible chauvinism on the part of writer-director Hatem Khraiche, as he tells us eventually that Spain is just one of  four countries involved in the preparation of pioneer voyages to the planet Celeste, a goldilocks world that offers the only hope of survival for the people of an increasingly polluted Earth. A young Spanish woman, Helena (Clara Lago) is the sole crewmember of one of the family-sized colony ships. Stalled by an oxygen malfunction, she has waited for a repair ship for three years since her parents apparently sacrificed themselves to extend her oxygen supply. At last, Alex the engineer (Alex Gonzalez) arrives to fix the problem. He has only 50 hours of "autonomy" to do the job; after that, Helena will have another 20 years on her own before she reaches her destination. Alex is the first human being other than her parents that she's ever seen. Five minutes in you can guess the direction the picture will take, but your movie brain should tell you that that's probably too soon to jump to conclusions.  It may not surprise you to learn that Alex has some alarming secrets, and that his interaction with Helena will put both people in danger as they edge toward revolt against a manipulative government's plans. Órbita 9 is ultimately more of a thriller than an all-out sci-fi film, but the sort of dystopia that forms its backdrop does tend to lend itself to thriller plots. I've probably now made it sound like a rather conventional movie, and I suppose it is that, superficially speaking. But the lead actors put it over with convincing displays of moral indignation, with Gonzalez adding a level of guilty torment over his role in a past failed experiment. The romance angle is a little much, taking the ending almost to a fairy-tale level, but then again, this is, for all its trendy pessimism, a fantasy film that ends on an odd note of reconciliation, given the seemingly unforgivable ruthlessness the head scientist showed earlier in the picture. At 95 minutes it seems scrupulous about not overstaying its welcome, even if it strikes you a Twilight Zone episode opened out and padded to feature length. Thanks to Netflix I didn't have to go out of my way to see this, so I don't feel that I can hold much against it.
Posted by Samuel Wilson at 8:16 PM No comments:

For Ken Clark's last film as Dick Malloy, Agent 077, the credited director is Alberto De Martino but series creator Sergio Grieco is listed as a co-director in reference works. This one stands out for featuring something close to a female supervillain. Arabella Chaplin (Daniela Bianchi) is a famous fashion designer who doubles as an assassin. She's a master of disguise, though Malloy figures her out easily enough, having noticed a cut on her arm when she was done up as an old woman (to kill a hospitalized criminal) before seeing a similarly placed bandage on the otherwise glamorous "Lady" Chaplin. Her origins seem to be less humble, or so her mentor/employer, evil industrialist Kobre Zoltan (Jacques "The Hypnotic Eye" Bergerac) insinuates. They're making a play for the Polaris missiles lost with the real-life sunken nuclear submarine USS Thresher. The idea is to sell them to the Eastern bloc, but as Zoltan, a scorpion fetishist, grows more unstable the danger grows of his launching the missiles himself to spite the world. Bouncing back and forth from gratuitous trips to New York City to consult with his boss, Agent 077 must use all his skills, his strength and his masculine wiles to thwart the tricky, traitorous duo.

The many faces of Lady Arabella Chaplin (Daniela Bianchi)

Lady Chaplin is a more stylish film than its predecessor, From the Orient with Fury, but that only makes sense with the greater focus on fashion and sexier women. It's somewhat disappointing to see the formidable Arabella as Zoltan's stooge, but as she finds Agent 077 an insurmountable and attractive antagonist she begins looking out for her own interests, playing all sides off each other to ensure her own survival. This doesn't quite work out, as Zoltan tosses her out of an airplane, but she's prepared for just such a contingency with a parachute and a machine gun to mow down Zoltan's minions on the ground. Malloy is his same old brawling self and gets to have some entertaining fights with a hook-handed henchman of Zoltan, but there are a few too many Goldfinger-inspired electrocutions for comfort this time out, and his bullring battle with a group of gangsters falls far short of the pop-art grandeur of the similarly-set, Coke-fueled combat in Tarzan and the Valley of Gold.

Speaking of Goldfinger, that film's massive success not only made films like Lady Chaplin possible but also persuaded their producers to commission title songs, often with unhappy results. The theme from Special Mission Lady Chaplin isn't quite the gibberish of many a spaghetti western jingle, or as inexcusably awful as many a High Noon-inspired anthem of the 1950s, but it does inflict on memory the regrettably deathless couplet, "Lady Chaplin, in your touch/There is something that means much." That earwig aside, Lady Chaplin is a more expansive and entertaining film than its predecessor. It makes one wish the series had gone on, perhaps with Lady Chaplin reappearing, but when Clark and Grieco teamed up for another spy film a year later, the actor had a new role, leaving it to those dependable Italians to make many more "Agent 077" films with different characters and actors. On the other hand, it may have been for the best for the series to end on this relatively high note.
Posted by Samuel Wilson at 9:26 PM No comments:

In his heyday, Reynolds was more an archetype than an actor. In some ways he was the antithesis of Seventies cinema as we idealize it today. He was an oldschool movie star who, having hit it big, settled into essentially playing himself. But perhaps because he was so popular during that decade, he was tied to it, more so than his peers, in a way that dated him with surprising suddenness. At the time, as his star fell, the moral of the story was that people had tired of seeing him cavort with his cronies on screen. Reynolds was held up as the textbook case of a performer who was having a more entertaining time making his movies than audiences were having watching them. From a greater distance, he seems more like those stars of the roaring 20s who couldn't keep their popularity in the 30s even if they could speak well. Like them, arguably, Reynolds was the victim of an abrupt cultural shift that rendered his persona obsolete. Disregarding the calendar, you can mark the transition from "Seventies" to "Eighties" by the fading of Reynolds' star. Why the Eighties should have excluded him is unclear, unless you see his fall as another repudiation of essentially rustic Americana along the line of the early-seventies purge of hillbilly shows from TV. It probably tells against Reynolds as an actor that, unlike other stars who stumbled around the same time, he never really managed to reinvent his stardom despite numerous opportunities. Perhaps he was meant to be a star only at a certain moment in pop history, but the least you can say about him is that he made the most of his moment. 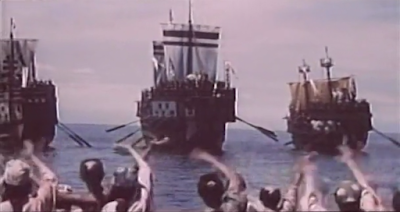 The director Tadashi Sawashima, who died last January at age 91, specialized in samurai and yakuza films. I suppose a pirate film would occupy a middle ground between those two categories, depending on whom the English title refers to. Depending on what you read -- I recommend an essay by the scholar Bernard Scheid in the anthology The Sea and the Sacred in Japan -- "Kaizoku Bahansen" is something of a redundancy, since both words have been translated as "pirate." Kaizoku seems to be the more unambiguous word, while bahansen, in the film's historical context, has more to do with illicit trade. During the mid 16th century CE, Japan's Sengoku or civil war period, China forbade maritime trade, but Chinese traders maintained clandestine relations with their Japanese counterparts. The argument of Sawashima's film is that the bahansen in general were peaceful traders, but acquired a bad name because a few bad apples raided and plundered coastal China, Korea, and other places. Thus, in the film, Kamon (Hashizo Okawa) is initially outraged to discover that, though raised a merchant's son, he's actually the son of a renowned bahansen. He discovers this when his natural father's old cronies press him, for all intents and purposes, into the service, though a younger leader (Eiji Okada) wants nothing to do with the landlubber. Kamon begins to change his mind when he's told that his father and mother were murdered by outright pirate Uemondayu, who's been ravaging the seas under the bahansen banner. Having some pretty girls with the fleet also helps win him over to the cause. Fortunately, he proves a natural with some innate cunning, winning a mast-climbing contest by distracting his competitor with the sight of one of those women. With his sea cred thus established it's on to high adventure on the high seas. 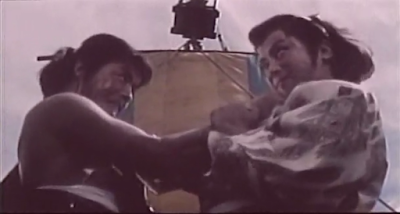 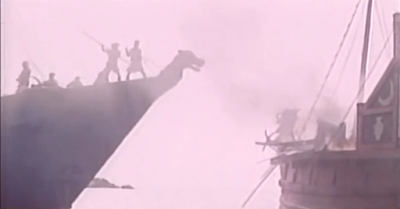 Toei spent some money on this film, which deploys several full-scale ships on open water, though they resort to more predictable model work on occasion and many night scenes on board are understandably shot on soundstage interiors. All in all, there's less of a ship-in-a-bottle feel here than in contemporary pirate programmers from the U.S. Sawashima directs energetically, cross cutting and moving his camera closer and closer to the principals to build up momentum for the film's sea battles and keeping his climactic shipboard fight moving at an urgent clip. If anything, his direction is most frantic and over the top in the scenes where the good bahansens return to and depart from their home port. The home folks go nuts for their seafaring heroes, their enthusiasm illustrated by insistently repetitive shots of celebration, from sailors throwing themselves into the water to meet welcoming rowboats to shots of cheering females. The director's galloping camera gives these festive scenes more of an epic feel than anything else in the picture. 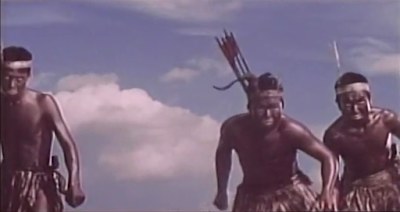 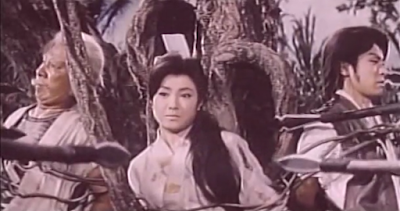 In the end it's a simple story of good and evil, but its goodness of purpose is marred by a trip to a primitive island previously ravaged by Uemondayu, populated by badly blackfaced Japanese extras who give the good guys exactly the treatment you might expect from the most racist American movie, short of throwing our heroes into the proverbial stewpot. If you took offense at the Faro Island scenes from King Kong vs. Godzilla, you'd better steer clear of this picture.  But if you think you can stomach some unenlightened moments, you'll find Kaizoku Bahansen a pleasant enough adventure film that gets more entertaining as it goes along.
Posted by Samuel Wilson at 8:24 PM No comments: