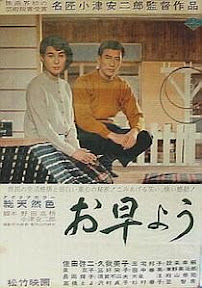 Among movie buffs, the big news this year has been the dethroning of Citizen Kane as "greatest film of all time" by Alfred Hitchcock's Vertigo, according to the decennial Sight and Sound magazine poll of critics and directors. Less well publicized was the third-place film, which also happened to rank number one when directors were polled separately. That film is Tokyo Story, a 1953 domestic drama by the Japanese director Yasujiro Ozu. Its canonization is a new high-water mark for Ozu (1903-63), who for some decades has been an idol for people who in particular find his work more humane, more virtuous in its modesty of scale, and (as far as some are concerned) more Japanese than his more famous and flamboyant compatriot, Akira Kurosawa. But the ongoing elevation of Ozu raises questions about exactly what his admirers, the directors especially, value about cinema itself. I've had the impression that admiration for Ozu reflects an austere aversion to spectacle, on one hand -- and I mean something purely pictorial, not the sort of spectacle Guy Debord wrote about -- and a possibly dogmatic belief that Ozu's subject matter, usually the dramas and comedies of everyday family and neighborhood life, is the most fitting subject of cinema, not to mention all the narrative arts. For someone not naturally interested in Ozu's subjects, there's a kind of "eat your spinach, it's good for you" quality in some advocacy for him, an insinuation that you may be lacking in compassion or simple humanity if you can't fall in love with his work. My own bias, I suppose, is in favor of the spectacular, though I allow the possibility of a kind of negative spectacle achieved by a genuinely stylized austerity, and I concede that sometimes substance is style. Spectacle can be more than big sets, special effects and energetic movement, however. Spectacle exists wherever and whenever style triumphs over substance, or when style becomes the substance of a film. Even Ozu can be a spectacular filmmaker at times, without ever bothering to move the camera. When you look at his late color films especially, you could be forgiven for thinking Ozu one of the most highly stylized of all filmmakers, if not a Mondrian of the movies. He has a very geometric, planar field of vision. Watch a typical establishing shot and you're basically at the base of a T that extends to the horizon line. Look up from the base -- the length of a hall, an alley, a road -- and you usually see people walking the perpendicular at the top of the T. You get the impression that you're just off the main thoroughfare, or a more major thoroughfare of existence, though you can get back there easily enough and do it everyday. Seen from the other side, Ozu's stories are taking place just around the corner, if only you turned that way to take a look. 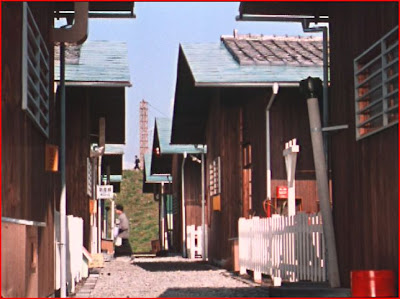 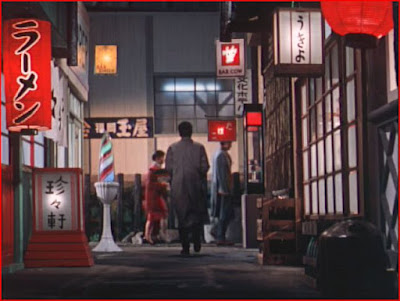 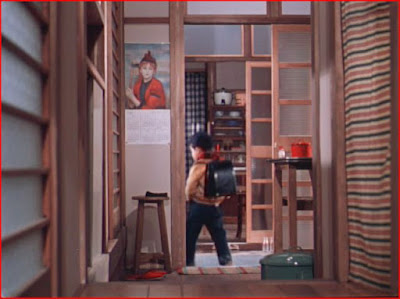 The color stuff is just self-indulgent. Check out this one-two sequence of shots from Good Morning. They're the work of Ozu's personal cinematographer, Yuharu Atsuta, and I doubt that the repetition of red in the upper left of each frame is any accident. 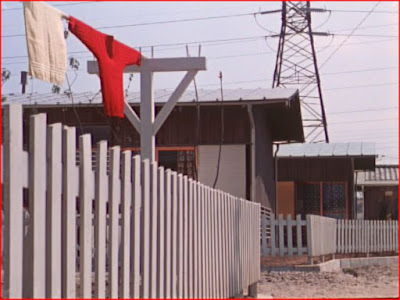 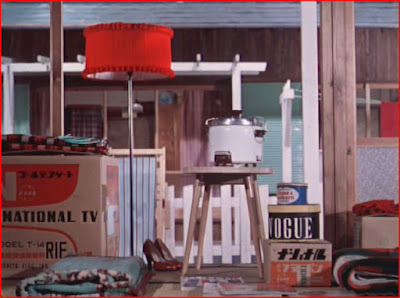 So Ozu in color is at the least at treat for the eye. But what's the substance to all this style? Good Morning is a remake -- Ozu was in a retrospective mood and released another remake, Floating Weeds, the same year -- of a silent movie known in English as I Was Born, But... The main thing Ohayo has in common with its original, which I haven't seen yet, is the idea of children going on a kind of strike. In the silent film, it was a hunger strike; in the remake it's a defiant vow of silence. Minoru and Isamu Hiyashi are refusing conventional communication with their parents because they won't buy the kids a TV set. There's only one in the neighborhood, apparently, and the boys go there to watch sports. Deliberately or not, Ozu identifies TV with western influences. The family with the TV has movie posters for The Defiant Ones and Louis Malle's The Lovers in their house. That family is also viewed by the gossips of the tightly-knit neighborhood as disreputable outsiders. There's a neighborhood association mildly riven by a dispute over whether Mrs. Hiyashi, the treasurer, has delivered the wives' monthly dues to their chairwomen, some suspecting that the latter has used the money for personal benefit, to buy a washing machine. The boys' silence strike exacerbates this feud. Since they refuse to speak to anyone, except when the older brother gives an OK signal, some of the women think Mrs. Hiyashi has told her kids to snub them. All of this gets defused easily enough, and just about everyone gets a happy ending. The boys get their own TV -- the other family has moved away and the Hiyashis make the purchase to give another neighbor a start as a salesman -- and their aunt falls in love with their soft-spoken English tutor. But is this victory or defeat? Is the boys' gain the culture's loss? 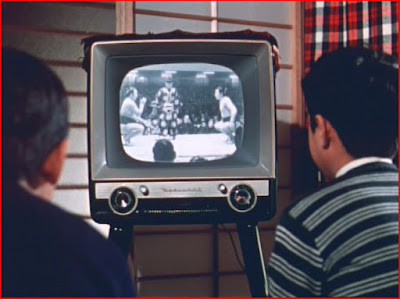 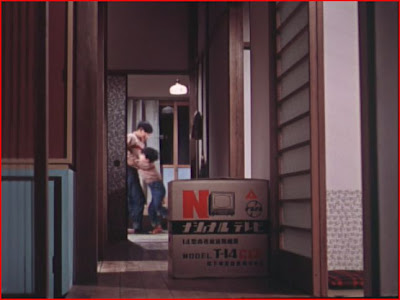 Some critics have taken Good Morning as some sort of doctrinal statement because of the opposition to television expressed in the story. One character predicts that TV will turn Japan into a nation of 100,000,000 idiots -- watch some Japanese TV and you might think him a prophet. But I don't think Ozu intends any one character to speak for him, and the overriding theme of Ohayo is the necessary acceptance of inevitable change. Comedy sweetens the pill, and this is definitely the funniest Ozu picture I've seen to date. His satire of small-town gossip is all the sharper for its understatement, but the director's at his best working with his two juvenile leads. Neither Koji Shitara nor Masahiko Shimazu had careers beyond childhood, but they are brilliant here, the younger boy especially as he echoes and imitates his elder's gestures of protest without necessarily sharing his full rage. 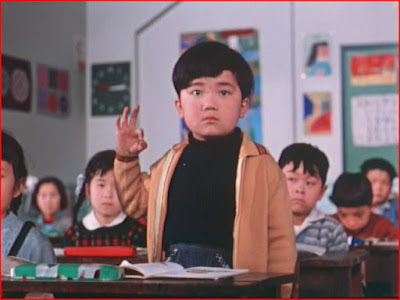 Both boys are great in the film's funniest scene, in which they try desperately to convey to their parents and their aunt that they need to pay their lunch money at school tomorrow. Still committed to silence, they're reduced to a hopeless game of charades, while you wonder whether the adults really do know what the boys mean and are just messing with them. It's a gentle kind of kid comedy, Our Gang without the slapstick -- but with fart jokes added and a closing shot of a child's underwear drying in the sun. Ozu doesn't entirely live up to his refined reputation here, you see, but Good Morning is really one of the best advertisements for the director for the inexperienced and the wary. This is a film you can watch without feeling that it's purely a matter of duty to cinema history. But I'm afraid I still don't quite get Ozu or what makes him special for so many people, because I like this movie better than the vaunted (and actually quite good) Tokyo Story. But maybe that proves that there's more to Ozu than meets the hard-core cineastes and ascetic humanists' eyes.
Posted by Samuel Wilson at 7:35 PM