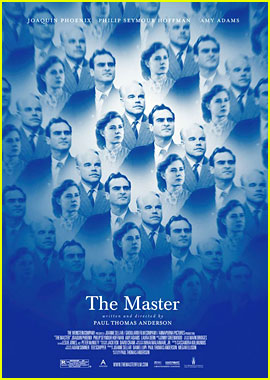 Despite the critical success of his last picture, There Will Be Blood, Paul Thomas Anderson had a hard time getting a new film made. We've known what it would be for a while -- or we thought we knew, and thus knew why Anderson was having trouble getting the project financed. From an early point, the hook for The Master, on which Anderson twisted in the wind for years, was that it would be a film a clef about Scientology, its title character a fictionalized (to an extent initially uncertain) version of L. Ron Hubbard. Scientology's a touchy subject in Hollywood, so studios didn't want to touch The Master until an heiress took it upon herself to back the film. The finished product triumphed at the Venice Film Festival, the number of awards it won limited only by festival rules. Now that it's arrived in America, some reviewers have expressed disappointment that the film is not quite what everyone thought. The Master is not about Scientology. It's not really about cults or cult leaders. And that's left some wondering whether it's about anything at all.

In story terms, it's about Freddy Quell (Joaquin Phoenix), a malcontent sailor who's having a hard time adjusting to peace -- not that he was well adjusted in wartime. He's a sexually frustrated sociopath who has one special talent: a knack for concocting alcoholic beverages from the material at hand in unlikely locations, from a torpedo bay to a developing room. As a civilian he declines from department-store photographer to vegetable picker until, adrift, he stows away on a yacht full of partygoers. The master of the revels is Lancaster Dodd (Philip Seymour Hoffman), a self-proclaimed polymath and author of The Cause, a book of modern-day revelations. He practices past-life-regression therapy and makes implausible claims for its benefits. He admires Freddy's mixological prowess and sees the clearly-troubled man as a subject for therapeutic experimentation. Not having anything else to do, Freddy settles into Dodd's orbit, to the dismay of Dodd's family, and becomes a self-appointed enforcer, beating up skeptics who challenge Dodd's ideas. One skeptic that can't be beaten down is Dodd's own son, who tells Freddy that his father is a fraud, making his philosophy up as he goes along. Despite the disillusionment, Freddy and Dodd seem locked in a co-dependent relationship. The attention Freddy receives is as much a drug as the hooch he makes for Dodd. But a parting of the ways is inevitable. Dodd's therapy appears to succeed to the extent that it inspires Freddy to finally look up an old flame of his, and more finally, a moment comes when Freddy feels he's learned enough and is ready to apply some of Dodd's lessons to others....

No plot summary will do justice to the overall experience of The Master. As a director, Anderson has put aside the relentless tracking shots that defined his early style and now works in a more classical style befitting the period of his new film. Aided by cinematographer Mihai Malamaire Jr., he achieves some perfect recreations of the look of late-1940's America as it survives in ad art and movies. As in There Will Be Blood, Jonny Greenwood of Radiohead has contributed an uncanny score of his own compositions and period torch songs -- expect a lot of play for "Get Thee Behind Me, Satan," in particular. All of this sets the stage for two titanic performances from Phoenix and Hoffman, who will face each other at the Oscars if there's any justice. Phoenix's Freddy is a paradoxically charismatic grotesque, his contorted carriage an embodiment of inarticulate yearning. Hoffman's Dodd is a barnstorming Wellsian projection of insecure power and narcissism, a mountebank of the kind you might have thought they didn't make anymore. The Wellsian note in his performance is, I think, a key to the film.

Dodd has been struggling for years to write a sequel to The Cause. It finally appears in the course of the film, but he seems less happy with the product than the production. Like Orson Welles, Dodd seems to enjoy the creative process, such as it is for him, so much that he's almost reluctant to finish it -- perhaps out of fear that all his followers will go away afterward. Dodd is no more Orson Welles, however, than he is L. Ron Hubbard. But I think he is Anderson's image, not of a cult leader or guru, but of a certain kind of artist. The Master itself is not about art, I think, but it has something to do with the anxiety of influence as Freddy seems to learn something from Dodd. What he learns, as revealed in a comic coda, might deflate Dodd a bit, but there was a real lesson, even if it isn't the one Dodd intended. In broader terms, Freddy is an apprentice, an inarticulate experimenter in whom Dodd recognizes a potentially intoxicating gift. Dodd tries to give him, if not discipline, a method -- a method that makes Dodd the center of an expanding universe, or as Freddy sees him in an already-notorious vision, the master of a harem of naked women. We've seen from an early Rorschach test that Freddy sees sexuality, or at least genitals, in just about everything, and we've seen his response to art, of a sort, when he humps a sand-sculpture of a naked woman in front of his fellow sailors. Freddy is ultimately interested in the art of scoring, while the artist, the master, is almost unconscious of the way his art works as a perpetual seduction to satisfy his own needs. So insecure is Dodd that he talks in terms of billions and trillions of years and infinite reincarnations to keep people interested, to keep the end at bay. Yet he seems just self-conscious enough about his real agenda to resent people like his own wife (Amy Adams) who take The Cause all too seriously. There's something of the artist's resentment of obsessive fans in the way Dodd barks at an acolyte (Laura Dern) who harps on a word change of seemingly vast significance in his new book that Dodd himself probably hadn't even noticed. The price of needing acolytes is having unworthy ones, while Freddy can finally pry himself loose from Dodd's orbit because he has simpler goals and no need for cosmic truth.

If The Master baffles some people it's probably because of the focus on Freddy rather than the Hubbard-surrogate everyone expected to see. The title creates an expectation that this should be Hoffman's movie and Dodd's story -- Dodd is called "Master" by his followers. Toward the end, Dodd challenges Freddy to let him know if he can figure out how to live without a master, since in Dodd's opinion no one has ever done so. Yet even before I saw the film, but after the first reviews came in, I thought of the title in different terms:


Out of the night that covers me,
Black as the pit from pole to pole,
I thank whatever gods may be
For my unconquerable soul.

In the fell clutch of circumstance
I have not winced nor cried aloud.
Under the bludgeonings of chance
My head is bloody, but unbowed.

Beyond this place of wrath and tears
Looms but the Horror of the shade,
And yet the menace of the years
Finds and shall find me unafraid.

It matters not how strait the gate,
How charged with punishments the scroll.
I am the master of my fate:
I am the captain of my soul.

This is "Invictus," by William Ernest Henley, and the reason I thought of it is these lines were chosen for his last words by one disturbed and alienated American, Timothy McVeigh. They may not be the words Freddy Quell would use, but they would seem to be an answer to Lancaster Dodd, and while the poem is British, it seems to express an essentially American attitude of the man who goes it alone, on his own terms, at least in his own mind. If Freddy escapes Dodd's influence, does that make him his own master? Or is mastery always belied, as Dodd hints, by the neediness that drives it? If you don't want to have a master you'll have to answer these questions yourselves, or ask your own questions. You can't expect either me or Paul Thomas Anderson to spell it out for you. For his part,at least, Anderson has made a rich, evocative, novelistic film that will most likely rank among the best of 2012.
Posted by Samuel Wilson at 10:38 PM

Email ThisBlogThis!Share to TwitterShare to FacebookShare to Pinterest
Labels: 2012, U.S.

One of your best write-ups ever. I really enjoyed this and am looking forward to the film. No other actor rubs me the wrong way more than Phoenix, but this seems like just the film to put such feelings aside for.

Excellent, thoughtful assessment of the film. It's so interesting to read all of the varying viewpoints - even amongst those who loved it vs. those who hated it, there are a wide array of reasons. To me this is just a good old-fashioned art-film "worth talking about." We’ve had very few if any of them this year so far.

Mark, in this film Phoenix is meant to rub people the wrong way and people are meant to think that something's wrong with him, so the actor and the role may be the perfect match.

David, I read your review (click on his name to see it)and I'm glad you brought up the repetitive questioning in Dodd's sessions since that could support a reading of Dodd as a Wellsian showman, the repeated questions being akin to retakes and possibly having the same purpose for Dodd -- to get the reaction he wants. Your appreciation of the film was excellent and thoughtful as well.

There are things I do like about this film (Phoenix, Greenwood, some arresting scenes) but somehow it never connected with me emotionally (a point you seem to concede) and I feel I need to see it a second time before firming up a more resonant position. Your analysis it goes without saying is terrific.

Sam, The Master seems to have divided audiences but in such a way that the division has remained remarkably respectful. I'm tempted to say anyone's appreciation of the film comes down to temperament. You're not the only one who's found something lacking in it, but the other side might concede the lack but feel that they don't need whatever the skeptics are looking for. That doesn't make my side undemanding, nor does it mean that you wanted something from it that'd harm the film. The real question is whether the divided response, with even the critics conceding tremendous qualities in the picture, signifies its greatness, or whether a greater film would better satisfy both of us.