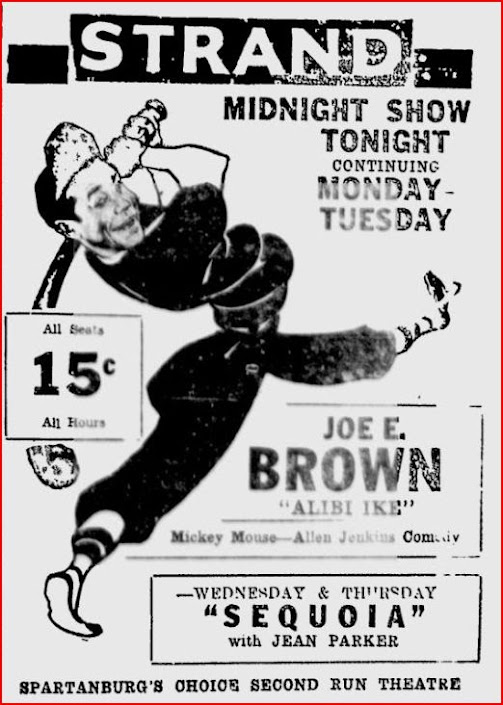 Joe E. Brown isn't really one of the great screen comedians -- he's best remembered today for his supporting role in Billy Wilder's Some Like It Hot, in which he utters the famous closing line, "Nobody's perfect," -- but the three baseball pictures he made for Warner Bros. are exceptional comedy films. They are slapstick comedies in which the hero is not a physically incompetent bumbler. In real life, Brown reportedly had enough talent on the diamond to be offered a minor-league contract, and on film he played a superior if not phenomenal athlete. The comedy came from the Brown characters' quirky personalities. He's virtually the same person in the three films -- Fireman Save My Child, Elmer the Great, and Ray Enright's 1935 film. Alibi Ike is adapted from a Ring Lardner story, while Elmer was adapted from a Lardner play, and Fireman is at least Lardneresque. In all three films the defining thing about the Brown character is that he starts as a big fish in a small pond, a small-town phenom, and brings a certain unselfconscious arrogance with him when he's called up to the major leagues. Each time he brings with him a potentially crippling eccentricity that can be linked to an unacknowledged anxiety about making it in the big league. In Elmer, for instance, he clearly prefers being the big fish in the small pond, idolized by his neighbors and slaved over by his family. In Alibi Ike -- his character's actual name is Frank X. Farrell -- his quirk seems pathological. He "alibis" constantly, going beyond what we think of the word today. He doesn't just make excuses for himself but feels compelled to make shit up even when he needs no excuses. He seems incapable of candor, as if to admit any truth about himself, to confirm anyone else's perception of him, is to leave himself vulnerable. Asked whether he's proposed to his girlfriend (19 year old Olivia de Havilland in her movie debut), Frank is inclined to deny it until one of his teammates explains that he's bet on the question, and after admitting the proposal he goes mad with alibis, claiming that he only felt sorry for the girl and blaming women for being seducers -- not knowing that his new fiancee is overhearing it all through a door. He does it all without malice and is genuinely stunned, though not without alibis, when she explodes in rage and breaks off the engagement. Although the film has a happy ending, there's no indication that Frank will ever change much. He just takes getting used to. Once people understand that he means well, he is forgiven his eccentricities, just as the Chicago Cubs manager (William Frawley) is quick to clear him of throwing a ballgame despite seeing him open a pay envelope from the gamblers. You see, Frank had alibied his way out of a compromising scene with the gamblers, or had thought he had, and he naturally assumes that the money simply proves how well he'd fooled them. Anyway, his friends realize that he lost that game only because he was in a funk over the girl walking out on him. Alibi Ike's message is that however exasperating Frank can be, he's a good guy at heart, only there's something wrong with him. Brown convinces you of both the good nature and the eccentricity bordering on pathology. In the baseball films, at least, he proves himself one of the better comic actors of the 1930s.

Brown was a product of the sound era -- he had the second best-known yell in Hollywood after Tarzan -- but with his horse face, his big mouth and his athleticism he might have made it in silent comedy. If anything, Warner Bros. seemed more enamored with the yell than Brown himself was. It's dubbed into a lot of long-shot action scenes, while Brown can be seen yelling only once in Alibi Ike. Enright puts plenty of sight gags into the picture, starting with the shock laugh of Frank driving his car into the ballpark through an outfield wall while Frawley wonders aloud when the tardy prospect will arrive. An extended sight gag comes toward the climax, after Brown has escaped from kidnappers -- he beats three of them singlehandedly -- and is desperately driving back to Wrigley Field. He somehow drives up the ramp of one of those car-carrier trucks and has to stop behind one of the stacked cars. Convinced that he's stuck in traffic, while the truck keeps moving, he honks his horn furiously. Repeatedly, the driver of the car-carrier waves him past. There's something sublimely futile about it, and the scene wraps up nicely as the driver finally gets out to see who's been honking at him, while Frank quits his car, goes in the opposite direction on the other side of the truck, jumps into the abandoned driver seat and leaves the driver behind. Most of the physical comedy is based on baseball, of course, from Frank's protracted windup to his frantic self-frisking when a bunted ball rolls up the sleeve of the oversized uniform he has to wear after finally reaching the park for the big game -- a state of the art night game in the year the first such games were played in the majors. Brown gets to show off his athleticism in the same scene when he finally retrieves the ball and makes a flying dive into home plate to stop the other team from scoring the winning run. It's nothing spectacular, but all the Brown baseball pictures are efficiently entertaining comedies maintaining an easy balance of slapstick and character humor. They aren't exactly among the best comedies of the Thirties, but they're better than most people are likely to expect.
Posted by Samuel Wilson at 11:38 PM