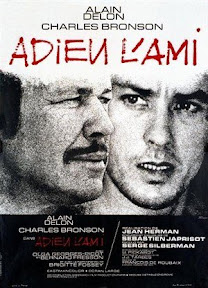 Here's a teamup of Alain Delon and Charles Bronson circa 1968, just as Once Upon A Time in the West finally elevated the latter to global stardom. Bronson is clearly still the subordinate actor, though you couldn't tell that from the cover art on the Lionsgate DVD. Delon doesn't even appear on the front, though he still has top billing. The film apparently didn't even hit America until 1973, after Bronson finally caught fire here. It's a curious item with some interesting action that's distinguished mainly by what I took to be a streak of misogyny that may reflect the attitudes of its original target audience.

Delon and Bronson are demobilized military men returning to civilian life after a tour of duty in Algeria. Delon's a doctor and Bronson wants him to sign on as a medic for some sort of mercenary unit that he's forming. Delon finds him an annoyance and decks him when Bronson suggests that his share of the payout could be bigger if fewer men survive. Bronson's a persistent character, however, and one who finds odd ways of making money. We see him as a procurer for a depraved old man who wants to play with a living doll for Christmas. He uses the "doll" as a game piece for some sort of strip roulette on a rotating platform in a parking garage before they get down to the real weirdness, during which he steals some petty cash and fights his way out of the building. 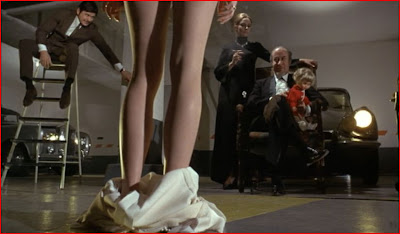 Meanwhile, Delon has gotten entangled with a woman who met him at Marseilles asking for word of a fellow soldier named Mozart. Delon says he's never heard of the man, but ends up involved with the lady anyway. She helps him get a job as an office physician so he can break into the office and replace some bonds of hers in a corporate safe. This place gets some hefty payrolls regularly, and that attracts Bronson's attention. He assumes that Delon is intending to rob the safe and wants in. He gets in, too. He and Delon find themselves trapped in an un-air-conditioned basement after brawling in the corridors. They have to figure a way out before they're found in the morning, and here is where they finally bond, Delon explaining that he knew Mozart all along -- had in fact killed him accidentally in Algeria -- and was fulfilling a debt to the man by helping out his girlfriend. Bronson is briefly aghast at the idea, but he understands that for Delon the alternative was unacceptable: he'd be a "dancer," someone who doesn't live up to his word. That can get you in trouble, but as Bronson says, it's hard to tell friends from enemies, or even to separate them. Consider the burning bonds they're using for torches overnight. On the one hand, they give light; on the other, they're using up the oxygen in their room. 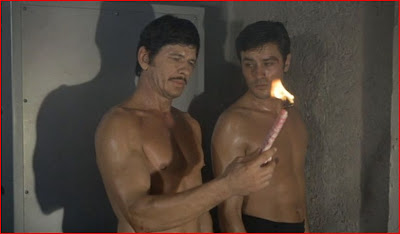 After they smash their way out, Delon realizes (voila!) that he's been set up to take the fall for a robbery and murder. Now he and Bronson have a mutual interest in not getting framed for the crimes. Bronson is caught in a train station chase while Delon escapes, and the American shows his honorable side by refusing to rat Delon out despite the third degree. That leaves Delon free to crack the case, which shouldn't be too hard. Setting things right and staying alive may prove more difficult, however.... 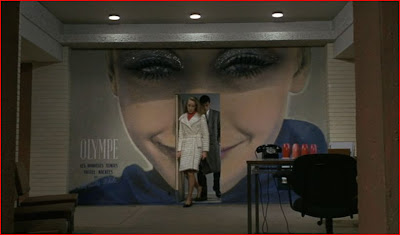 Some reviewers have gotten a weird vibe from the male bonding between Delon and Bronson and the negative attitude toward women director Jean Herman and writer Sebastien Japrisot express. The lead actress, Olga Georges-Picot, is a kind of femme fatale, but so in a less obvious way is Brigette Fossey as the boss's daughter who's assigned to Delon as a secretary. She starts off quite mousy and seems incapable of looking Delon in the eye; he cures this by kissing her. Later, she shelters him and behaves quite submissively, serving him meals like a maid. Later yet, hoping to stop him from taking her back to the building, she makes a bizarre series of promises to him.

Something may be lost in translation (Delon seems to be doing his own English dialogue, by the way), but this speech had to be weird in the original. In any event, Fossey turns out to be in cahoots with Georges-Picot, with whom she makes a desperate last-ditch escape attempt with an empty gun. How in cahoots are they? Are they lesbians, or is that just an assumption we're more likely to make today? This PG rated film offers no proof, but the women's partnership, combined with the passive depravity on display in the "doll" sequence (in which another woman, presumably the old man's daughter, joins in the ogling) suggests Herman and Japrisot as candidates for the He-Man Woman Haters Club. 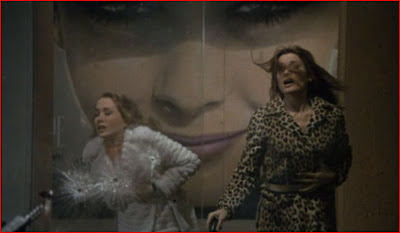 Adieu L'Ami is no classic, but it's a mostly effective, efficient thriller in the cool, unaffected French style. It's a potboiler compared with Jean-Pierre Melville's films, but it has just enough action and just enough panache to hold your attention to the end. Delon is his typical self and Bronson seems to enjoy his antihero role. This is the earliest appearance I know of of the mustachioed, thicker-haired Bronson who would become a Seventies icon. That might make it a milestone unless someone knows of an earlier makeover. I would definitely recommend the film mainly to Bronson fans, though Delon's followers will probably also dig it.

Thank you very much for your detailed review Samuel, this is one of those films that I've always been interested in seeing, yet the urge slips away and I totally forget about it until something reminds me of it again months later. Maybe I should order it now...

It was extremely interesting for me to read that blog. Thank you for it. I like such themes and everything connected to this matter. I definitely want to read a bit more on that blog soon.