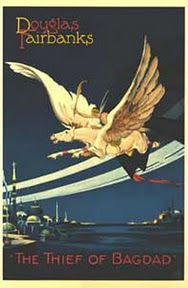 I'm making a list and checking it twice. I'm going to find out...what are my favorite movies from the silent film era. That's because the Wonders In The Dark blog is holding a poll to determine the favorite films, short or long, made between 1895 and 1929 to coincide with resident movie-omnivore Allan Fish's own Top 100 list. Have I even seen 100 silent films? Counting short subjects, I think so, and there are more to see online and at the local library. Just now, for instance, I've finished watching Raoul Walsh's Arabian Nights-inspired fantasy epic -- co-written, produced by and starring Douglas Fairbanks the elder. It's as good a point as any to address the challenges involved in appraising silent film.

Some silents have aged better than others, though it does depend on the eyes of the beholder. The major American (or Anglo-American) comedians -- Chaplin, Keaton, Harold Lloyd, Laurel & Hardy, Harry Langdon -- are still funny to many people, and Keaton in particular is arguably the father or grandfather of the modern action movie. There are other directors whose standings have improved over time after having been ahead of their own time. Then there are those films or filmmakers that seem hopelessly alien to modern sensibilities or modern narrative expectations, which approach the stereotype of silent film that some people hold in their heads. Talking pictures rendered a certain style of silent performance and storytelling obsolete, because that style wasn't appropriate to sound film. But we'd be wrong to define silent film as a whole by standards set by talkies; that'd make silents look inadequate by default. The silents lasted long enough to be judged as a genre or medium on their own terms, and that's how we have to deal with Douglas Fairbanks. 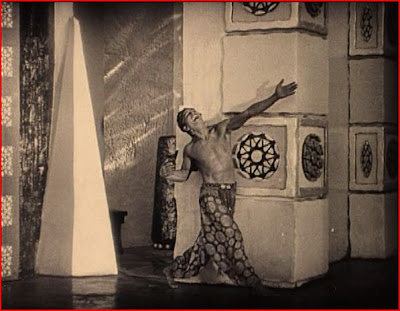 The Thief of Bagdad enjoys life. Above, he responds to the smell of food. Below, he drinks from a water fountain. 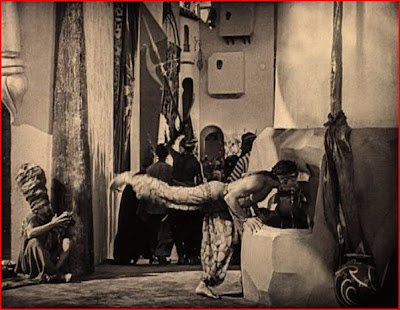 Fairbanks had a stage background, but in silent cinema he practised pantomime. It's not the same as "mime" which nowadays has to do with the manipulation of non-existent objects. Pantomime is the business of expressing oneself without words, and its how many silent actors described their work. Gesture has a lot to do with it, and Fairbanks does a lot of gesturing. So do most of his cast. The Thief of Bagdad has a lot of arm raising in it. Today it looks stagy and fake, but beside its practical purpose of making emotions plain from a distance it's a matter of style. Thief is a very stylized film, and it's more Fairbanks's style than Walsh's. His own style is very balletic, or else it's the style of a man who, like Chaplin, has been told that he had balletic grace and agility. He's flamboyant to the point of camp in his movements and his costumes in a way that's probably more alarming now than it was 80 years ago. Fairbanks himself probably saw no contradiction between his prancing and posing and his role as a manly man. Pantomime doesn't usually aspire to naturalism, and if you insist on naturalism you may as well try a different movie. In any event, an Arabian Nights fantasy probably shouldn't be held to naturalist standards of anything.

After all, what's this all about? Thief is the story of a shirtless barefoot brigand who eventually calls himself Ahmed. He pads the polished pavement of Bagdad in a one-man crime wave, eventually pilfering a magic rope that'll let him climb the highest walls. There's only one thing to do with such a gimmick: rob the Caliph's palace. Inside, however, he falls in love at first sight with the Caliph's daughter. This puts the whole kingdom in play, because the old Caliph has decided that whoever wins his daughter's hand will be his heir, the girl herself being obviously incapable of rulership. A geopolitical showdown results as the Prince of Persia, the Mongol Khan and the Prince of the Indies all seek her hand. So does Prince Achmed, the Prince of the Isles and Seas and of the Seven Castles, i.e. our hero in stolen finery. He happens to land butt first in a rosebush in a way that fulfills the prediction of the Princess's fortune-telling slavegirl, and given the unlikely looks of the competition that's a fortunate thing. But eventually Achmed is exposed as a fraud and cast out, while the Khan plots to infiltrate an army into Bagdad (with the help of traitorous slavegirl Anna May Wong) and win the kingdom as well as the girl. 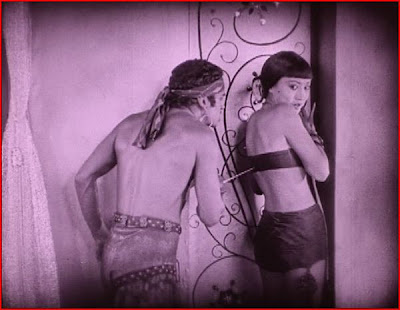 A guilt-stricken Achmed, once contemptuous toward Islam, seeks consolation from the wise local mullah, who tells him to learn humility and earn true happiness through an arduous quest. It so happens that, the Princess's first choice having been disqualified, the three remaining Princes have been sent out treasure hunting. The one who comes back with the most unique treasure will win the Princess. The Prince of Persia buys a flying carpet. The Prince of the Indies recovers a crystal ball from the eye of an idol, at the cost of a minion's life. The Khan acquires a golden apple that can resurrect the dead. After rendezvousing at a caravansary, they combine their powers to fly back to Bagdad to cure the Princess of a mortal malady (secretly sicced on her by Wong). They argue over who should get the most credit, but our heroine points out that any one treasure was useless without the other two. The Caliph needs time to ponder this, but during that time the Khan makes his power play. 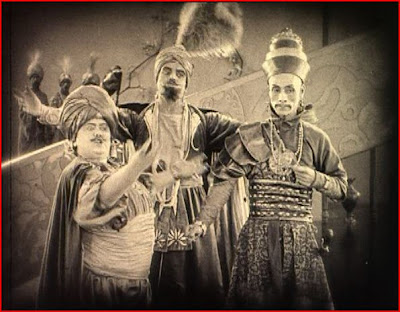 Meanwhile, after braving caves of fire, slaying a dragon, talking to a tree man, fending off a giant bat and resisting the temptations of mermaids, Achmed hustles back with his prize: a container of instant stuff. Instant horse! Instant princely clothes! Instant loaf of bread! Instant army of 100,000 men to liberate the captured city! And having earned happiness, he flies off on the carpet for his honeymoon. 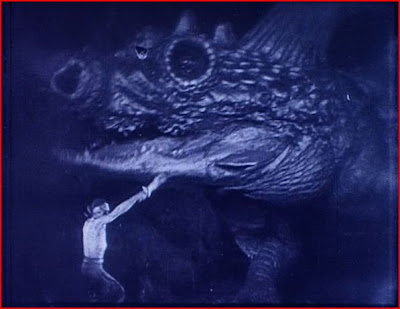 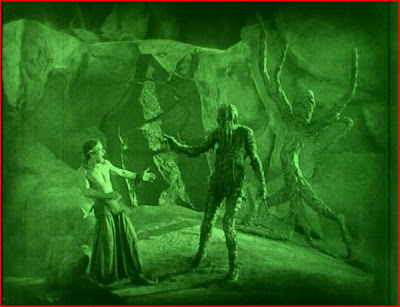 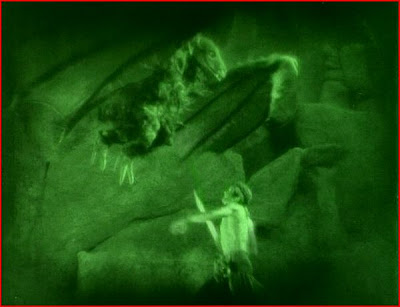 This film has nothing more profound to say about the human condition than "Happiness Must Be Earned." It is pure high-spirited fantasy with onetime state-of-the-art special effects. Some of them, especially the crane-guided carpet sent swooping over William Cameron Menzies's massive sets, are still impressive. But it seems like the sets themselves were meant to be the most special effects. Many are so huge that Fairbanks has to make his gestures as big as he can just to be noticed. Walsh's camera is mostly immobile on the assumption that all you need to do is look at those sets and feel awe. When he fills those sets with hundreds or thousands of extras, it is awesome. It's certainly more awe-inspiring than programmers filling a digital screen with so many avatars or whatever you call them nowadays. It must be admitted that the presentation is little advanced in principle from the time of Georges Melies. On the other hand, the tableau isn't an automatically obsolete way of filming things, and there's something to be said for the way Walsh's images fill the screen. It may be the most appropriate way to tell the type of story Fairbanks wants, which is more a fairy tale than an action movie. 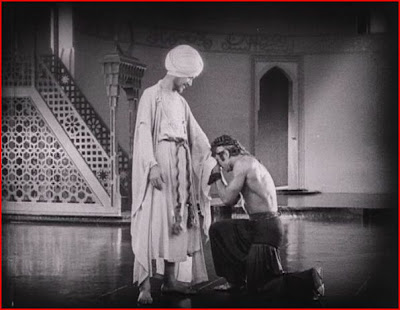 There's something sort of poignant now about the way Fairbanks romanticizes the Muslim world. It's fashionable now to deplore people like him, not being Arabs, for playing Arabs, but for all that Thief plays on stereotypes of Arab or Muslim culture, doesn't it speak to some admirable universalizing impulse in Fairbanks that he presents himself as an Arab hero who takes unquestioned moral advice from a Muslim teacher. He had a very different image of Arab culture than many people do today, and while it may be no more accurate than the present stereotype it's certainly a more congenial one than today's murderous puritan. Admittedly it's a vision of a fantastical past, but it's also a very American fantasy of maximum upward mobility (Thief to Caliph) that does look like a shortcut to success despite the star-written moralizing at the beginning and end of the film. 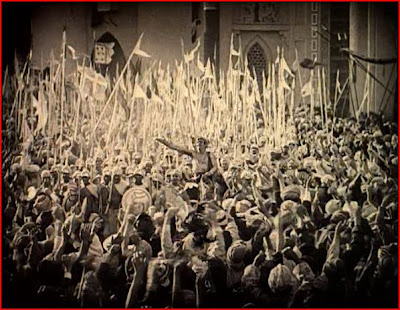 Don't go in expecting a fast-paced action film -- in fact, prepare to be patient for a relatively slow-paced 2.5 hours -- but if you appreciate impressive art direction and old-time heroic fantasy you may well be entertained by The Thief of Bagdad. It's tempting to dismiss films like this one as an aesthetic dead end, but that's just history playing tricks on us. As a historian I'm intrigued by the dead ends, and I found Thief fascinating. But I think people who understand the craftsmanship involved in this sort of project and understand exactly what they're going to see can still appreciate Fairbanks's work on its own terms.
Posted by Samuel Wilson at 9:25 PM

One of my favourites. Visually stunning, and fun. What more could you want? On the subject of Douglas Fairbanks, you must see The Gaucho. With Mary Pickford as the Virgin Mary! And Fairbanks and Lupe Velez getting very sexy.

God you are good Samuel! You are the internet's best kept secret and you are not only relentless but also prolific almost to a fault. Yes the Menzies sets in this one are still impressive, and it's a visual delight even for those adverse to silent films. Your lead-in, and thorough discussion here is fantastic, and I must thank you for your promotion of the poll at Wonders, though your own enthusiasm is infectious!

Samuel - First off, sorry I haven't been around these parts commenting much lately. I have been following everything, just not dropping in many places to converse. I've had a short break after the annual countdown was completed and now am getting charged back up again.

Once I finish watching what I can for the noir countdown, I plan on doing exactly as you are doing here -- going back through silent films, which I know very little about. This is one I plan on watching, and have many, many others to lined up. Your writing hear is incredible, as Sam rightly points out.

Thanks for writing, folks.

dfordoom: The only other Fairbanks Sr. stuff I've seen are Mark of Zorro, Robin Hood and a version of The Iron Mask narrated by Doug Jr. I'd like to see Gaucho and the rest of his features, at least from the United Artists years.

Sam: Sometimes I question the "almost" in "almost to a fault," as I get a little compulsive about this blogging business. I have a few more silents to see (look for another review later this week) before I head to the poll.

Dave: No apologies necessary, but welcome back just the same. I'm looking at a few noirs myself in anticipation of your survey, which should be one of the movieblog highlights of 2010.

"The Thief of Bagdad" is a perfect fairy tale, if you know what have been "One Thousand and One Nights" in Europe: a wonderful book of tales re-written with an European taste. In this film you can also appreciate the US taste: the right to happiness and the possibility to reach the throne (becoming President) even if you are a poor boy, if you are can work hard and bravely. The film is still a masterpiece if you see it as a fairy-tale.