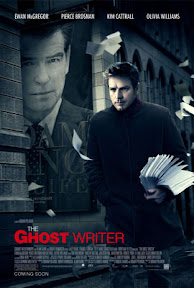 When a woman hands a man the confidential manuscript of a memoir and tells him he has a limited time to read it, I don't need to see the white pages turn into a snowy landscape to know that the spirit of Orson Welles is in the room. Roman Polanski's new film is Wellesian in theme if not in style or structure. If it hints at Citizen Kane at some points, it points to Mr. Arkadin in others. One can only imagine what Welles might make of the situation Polanski has adapted from Robert Harris's novel, in collaboration with the author. The title character is an unnamed writer (Ewan McGregor) hired to polish the memoir of a former British prime minister (Pierce Brosnan) after the politician's original collaborator dies. The previous ghost writer got separated from his car and the ferry that bore it under circumstances that grow increasingly suspicious, while the pressure on the present ghost to finish the book grows more urgent as his subject faces an International Criminal Court indictment for war crimes. Adam Lang (meant as a stand-in for Tony Blair, though Brosnan attempts no imitation) is accused of placing four alleged terrorists into the hands of CIA torturers. Is there a connection between his legal jeopardy and the death of his previous ghost writer? Does the project put the present writer in jeopardy? It wouldn't be much of a thriller otherwise.

McGregor's character is a kind of doppelganger for Lang and may be set up to die for Lang's sins if he isn't careful. As he comes to question the official version of his predecessor's demise, he stumbles across some supplemental research the first writer had undertaken on Lang's rise to power. As he traces the first ghost's fatal steps, the new ghost puts himself in danger of ending up in the same place, setting up some nicely handled set pieces of pursuit and escape. Meanwhile, he finds himself in a potentially dangerous relationship with Lang's wife (Olivia Williams), who's jealous of hubby's closeness with his chief assistant (Kim Cattrall). All of this is handled very well by the sure-handed director. The film betrays nothing of the constrained circumstances of its final assembly, Polanski having edited it in jail while extradition to America for an extended stay seemed likely. The acting is good all around, possibly excepting Brosnan. He doesn't strike me as the sort of wonky politician I expected Blair or a fictional counterpart to be, but in his defense the movie politician is supposed to be less than meets the eye; that's part of the plot. Polanski gets the most from limited use of such American character actors as Timothy Hutton, Jim Belushi and the mighty Eli Wallach. Someday, at the end of the world, Wallach and Ernest Borgnine will face each other as the last men standing, and while Wallach looks a little frail here I wouldn't count him out.

The Ghost Writer is an effective, entertaining film that I readily recommend, but it left me wondering whether the conspiracy thriller genre is going obsolete. Thrillers of this kind work by withholding and gradually revealing information in a process that doesn't seem realistic in the current information age. Without spoiling anything, let me note that The Ghost Writer saves a major piece of circumstantial evidence for its final revelation. That revelation is meant to have you suddenly think differently about a major character. In retrospect, however, you sense that the writers had manipulated you into an artificial presumption of innocence. Given the internet research our hero undertakes to discover the sinister ties linking other characters, it seems unlikely, given that final revelation of a detail that seems to have been public knowledge, that the ghost would not have stumbled onto something online that at least suggested the association that so floors him later. When you consider that one tidbit he learns from a single website is accepted by an important person as decisive proof of a monstrous, decades-long conspiracy to manipulate British politics, his failure to find anything to warn him of a more dangerous truth seems even more unlikely. Movies are simply falling behind the ability of the conspiratorial imagination to draw inferences. As a result, it was in its final minutes when The Ghost Writer suddenly seemed most old fashioned -- and its extra revelation of a hokey secret code didn't help. But overall, Polanski's film is old-fashioned in good ways, and many people may not feel the same way about the ending as I did. Maybe I'm just too conspiracy-minded -- but that's just what they'd like you to believe....
Posted by Samuel Wilson at 8:44 PM

I totally agree with this, the film is reminicent in tone with many 70's conspriacy themed films (All the Presidents Men, Three Days of the Condor). The only recent film that follows in this path was Pollack's "Michael Clayton" which also reminded me of those great 70's works. Needless to say I loved this film (wrote my own review at "Watching Shadows on the Wall." Like your comparison to Welles like themes.

Thanks for writing, John. I suppose what keeps the film from being more Wellesian is a lack of ambiguity about the prime minister. Since he's so obviously a stand-in for Tony Blair there's little mystery about him, and the revelations in the film are likely to get an "I thought so" response more than anything else.

I thought Michael Clayton was pretty good too, by the way.