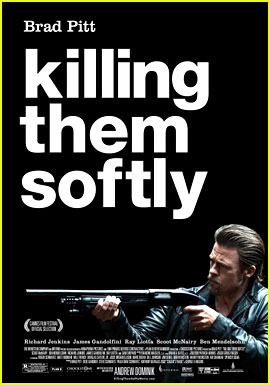 First things first: the most commented on aspect of Andrew Dominik's adaptation of George V. Higgins's Cogan's Trade is the writer-director's politically pointed decision to update the time of the story from its original setting in 1974 to 2008. The location apparently has not changed, though Dominik filmed the picture in New Orleans rather than Higgins's Massachusetts. He set the story in 2008 rather than "Present Day" so he could use speeches by George W. Bush and Barack Obama as part of the soundtrack. In Dominik's imagination, the nation hung on every word of that year's presidential election; speeches and political commentary can be seen or heard everywhere, including at a mob card game. While Dominik's own political commentary is not, with one bludgeoning exception, as heavyhanded as critics have claimed, his constant invocation of the 2008 election and the economic crisis that preceded it is understandably seen as an invitation to see his adaptation of Higgins as a mirror of history, an analogy of the crisis. But what does Higgins's tale from 1974 tell us about 2008 or 2012?

Grant that Cogan's Trade has relevance beyond the time it was written, and grant that Dominik saw relevance to the present. Here's what happens: two lowlifes knock over that card game at the instigation of an ex-con who depends on any robbery being blamed on Markie Trattman (Ray Liotta), the man who actually hosts the game, since Trattman actually had staged a robbery of his own game in the past, but had been forgiven for it when he confessed some time later. Cogan (Brad Pitt), a fixer for the regional boss, the moribund Dillon, is called into town to get to the bottom of the mystery, and quickly decides that Trattman needs to die even though he probably isn't guilty this time. Trattman needs to be sacrificed in order to restore confidence in the card game so people can make money again. Of course, the perpetrators and their instigator need to be tracked down and killed as well. For Dominik, I assume, the idea of killing a scapegoat to reignite confidence in a crooked economy rang with awful contemporary relevance. Does that make poor Trattman a symbol of someone or something in our time? It's hard to tell. We know where Dominik stands politically thanks to an ugly appendage he attaches to Higgins's conclusion so Brad Pitt can rant contemptuously at Obama's victory speech, reject the idea of Americans as a united people, and make the shocking -- shocking!-- observation that "America is nothing but a business." Rest assured that Dominik doesn't put these words in Pitt's mouth to make us agree with them. Rather, if Pitt equates America with Cogan's peculiar idea of "business," then Dominik equates Cogan's trade with "business" as practiced in 2008. Yet the 2008 context invites a reading of Killing Them Softly possibly far from whatever Dominik intends. For those few apparently bothering to watch and interpret the film, Killing could just as easily be seen as a critique of the great bailouts of 2008 and 2009, not by equating any event in the story with the bailouts, but by seeing Markie Trattman as someone who, in another context, might have been seen as "too big to fail," given his card game's role in the underworld economy, yet is not bailed out. The clean sweep carried out by Cogan -- one of the robbers escapes with his life only because he gets arrested for heroin dealing -- could well be seen, by analogy, as what should have happened with the big banks, but didn't. Is that what Dominik wants people to see? Somehow I don't think so. The problem with Killing Them Softly from a political standpoint isn't that it's partisan or heavyhanded, apart from that Chaplinesque finish, but that its political symbolism is hopelessly muddled.

Fortunately, Killing Them Softly is otherwise a reasonably faithful translation of Higgins's novel, though it lacks much of Higgins's distinctive atmosphere. Perversely, Dominik, whose last film was nearly three hours long, gets his latest done in little more than 90 minutes. But a truly faithful adaptation of a Higgins book needs more time to breathe. We won't see too many faithful adaptations, however -- this is the first one in almost 40 years -- for the simple reason that any writer who adapts Higgins's prose faithfully will be accused of aping Quentin Tarantino. Cogan's Trade is full of rambling, digressive, occasionally trivial conversations that literally are the atmosphere of Higgins's underworld, but Dominik prunes most of these scenes to the bone. The nearest things to exceptions are the scenes Pitt shares with James Gandolfini, the latter playing a hitman having an alcoholic breakdown just when Cogan needs him the most. These scenes come closest to the authentic Higgins flavor and keep alive a spark of Higgins's true theme, which is that many self-styled badasses don't live up to their hard-boiled talk. Coming to Higgins from conventional crime fiction is like walking into a trap. You expect someone like the novel's Russell, a thuggish sounding Vietnam veteran -- transmuted by Dominik into a wretchedly-addicted Australian, to be a dangerous badass, and the gradual revelation of him as a hopeless idiot comes as a surprise, if not a disillusionment, that's diluted by the actor Ben Mendelsohn's portrayal of him as a wreck from scene one. Because Gandolfini is still Tony Soprano to many people, and Dominik gives him a portentous slow-motion arrival at the airport, you do expect him to be some kind of super hitman, and his breakdown has just the right shock value for anyone expecting a conventional crime movie.

Higgins left Dominik a sturdy hook to hang a movie on, and Dominik leaves us a sturdy if thorny little picture. He's guilty of more than rhetorical excesses. Most of the action is well-shot and bluntly effective, but there's a big exception in mid-picture. Shooting the murder of Trattman, Dominik succumbs to the temptation to turn at least one killing into a cinematic set piece. For no obvious reason, once Cogan starts firing everything goes slo-mo, including the bullets going through Liotta's head. Liotta himself is reduced to a slo-mo mannequin as a tow truck smashes into his car. For Dominik this is an ecstasy of exploding plexiglass, but it's also blatant self-indulgence and show-offery at odds with the tone of the rest of the picture. He works more simply and to the point when Cogan finally catches up with the mastermind of the cardjacking, filming the first shot from a distance as the man gets it through a car door. Higgins seems better served by relatively objective direction, as in Peter Yates's Friends of Eddie Coyle. Bits like Liotta's death scene make Killing Them Softly more Dominik than Higgins. But there's still enough of Higgins there, and enough strong performances from Pitt -- a star who I can say honestly vanishes into his vile role -- Gandolfini, Liotta, Richard Jenkins as Cogan's local liaison, and others, to make the picture worth sitting through its awkward moments. It doesn't live up to Dominik and Pitt's epic western The Assassination of Jesse James by the Coward Robert Ford, but the talent is still there, and despite the new film's apparent flop -- it was a small crowd at the multiplex this afternoon -- I look forward to the two working together again someday.
Posted by Samuel Wilson at 10:55 PM

Commercially, I'm afraid, the evidence is inescapable, no matter how little the movie cost to be made. The more startling news was that audiences gave the thing a Cinemascore grade of F. I don't get that at all.

Samuel, while I wouldn't give the film an "F", I am not so sure it gets a passing grade from me. You make a good case and defense of the economic bookends, but this is a maddeningly frustrating film, with vague metaphorical underpinnings and over-emphasized stylistics. Pitt, Gandolfini and Jenkins all turn in compelling performances, but the sickening over-the-top violence is over-stylized, and the use of the Obama's television broadcasts are wildly pretentious. Dominick gave us the extraordinary JESSE JAMES, but this is oddly disjointed and talky. It's big set pieces don't have the thematic effectiveness that such sequences had in Refn's DRIVE. But again, as always a masterful piece here.

Samuel, I'm with you in that the whole film doesn't come together. There are some good stretches and the acting is fine, but the Dominick never gets comfortable with the tone of the film.....too much politics that don't resonate or jive. That slo-mo scene also was over the top for no real reason either. There were only 2 other people in the theatre with me.

Sam, a more faithful adaptation of Higgins would be more talky but would also seem less disjointed without the inappropriate set pieces, among which I should also include the scene shot from Russell's heroin-addled point of view for no good reason.

Jon, I think I may have been somewhat defensive about the film because of my regard for the novel, but there's some damning evidence that Dominik didn't trust the material and needed to jazz things up visually while making it all allegedly relevant. My theater had about a dozen people, by the way.