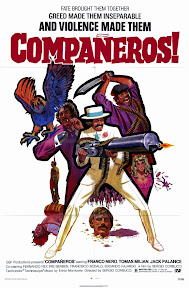 Companeros is a thematic remake of Sergio Corbucci's Il Mercenario, with Franco Nero in a similar role as an archetypal foreign expert -- Polish before, he's a Swede now -- and Jack Palance as an even more eccentric antagonist: a Scottish (I think) pot smoker and bird fancier with an artificial hand. Added to the mix in place of Mercenario's Tony Musante is Tomas Milian, as much a spaghetti-western stalwart as Nero, as the archetypal primitive bandit. Corbucci gives him a Che Guevara look, complete with beret, but Milian's Vasco is no ideologue, but the usual self-interested, ignorant brute who almost by accident becomes an officer in the insurgent army of the retroactively regrettably named General Mongo (Jose Modalo). Mongo wears a fiery red tunic but is no leftist. His is one of at least two rival forces battling the Porfirio Diaz government in Mexico circa 1910. His main rival, for this movie's purposes, is the intellectual Professor Xantos (Fernando Rey), who has built a mass movement despite his personal nonviolence. Xantos was naive enough to seek support in the U.S., where he remains an involuntary guest as the story opens. The Americans are willing to support him against Diaz and Mongo, but only if he agrees to grant oil concessions to U.S. firms. While the Americans work on him, Mongo has taken a town from his followers. Xantos's treasury is inside a safe, but only he knows the combination. If Mongo is to pay the Swede for his boxcar full of weapons and explosives (disguised as a quarantined car), he needs the Swede and Vasco to cross the border and break his rival out of captivity. Once he has the information he needs, Mongo plans to put Xantos on trial and execute him.

For his natty attire the Swede (Franco Nero, above) earns the nickname "Penguin" from Vasco (Tomas Milian, below) who's never been warned about drinking while shooting.

This is a more broadly comical and less pictorially ambitious film than Il Mercenario, but Corbucci and cinematographer Alexander Ulloa still put together an attractive picture. Like most of the foreign expert/primitive bandit buddy films from Italy, Companeros is still a consciousness-raising exercise, but it shows characters changing in different ways. In the most predictable scenario, Vasco evolves from one of Mongo's goons to a supporter of Xantos, taking the side of his sometime girlfriend (Iris Berben) whom he transforms from long-haired beauty to pixie revolutionary by hacking off most of her hair after finding her in bed with the Swede. The native usually gets the girl in these pictures, while the foreign expert either dies (sometimes deservingly) or gains revolutionary consciousness himself. Sometimes his new loyalty is just a matter of friendship, and that seems partly the case with Nero here, despite the impending duel with Vasco that serves as a framing device for the Italian edition of the film. Xantos himself evolves during the picture, finally abandoning his implausible insistence (given the situation) on non-violence when he's in a no-alternative position to rescue the good guys from Palance. Given the time and the likely audiences, non-violence was never going to get far in spaghetti westerns.

Xantos (Fernando Rey, above) hopes to convince you of the justice of his cause, while Mongo (Jose Modalo, below) would just as soon shoot you as look at you.

As the new element in the Corbucci scheme, Milian makes the best impression. Even playing an ignorant brute as he often does -- Vasco starts a gunfight when he mistakes the flash of a camera for an attack -- the Cuban actor always manages to convey that his character's mind is working on some level. Nero isn't exactly challenged by his role but at least he seems to enjoy it, while Palance is in his own special place as an almost superfluous and certainly gratuitous villain.

Let's leave Jack Palance (above) alone with his bird and his bliss while acknowledging Iris Berben (below) and her ambivalent band of rebels.

For a Corbucci film, Companeros has little obvious influence on Django Unchained, Quentin Tarantino's Corbucci homage, apart from a humorous tone that was also present, in a more moderate degree, in the more influential Mercenario. If anything, Companeros is Corbucci's homage to himself -- Vasco gets to drag a coffin around Django-style briefly -- or to Mercenario specifically. Its derivative nature keeps it from the top rank of Corbucci's westerns, but on its own terms it's an entertaining adventure that could be enjoyed easily enough by people who've never heard of the director or his earlier work.
Posted by Samuel Wilson at 12:04 AM

One of my favorite spaghetti westerns and I prefer it to THE MERCENARY. Great review and awesome site!

Thanks, Christopher. I hope to have more spaghetti reviews up in the next few weeks as I work Django Unchained out of my system. There's nothing wrong with preferring Companeros to Mercenary: they're pretty close in quality as well as content.