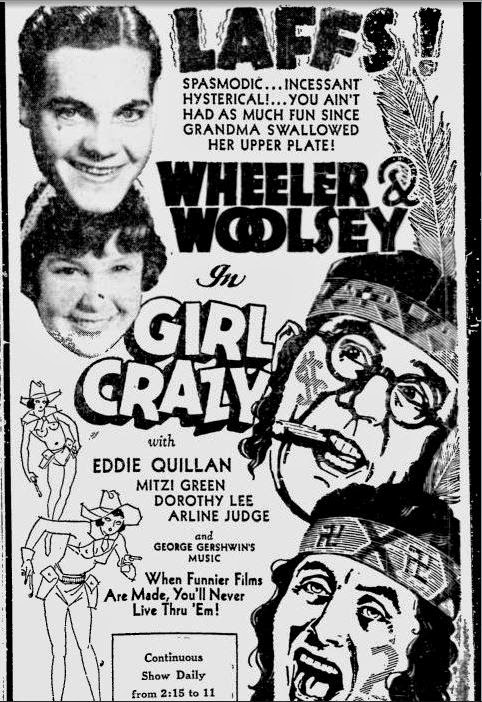 Even the advertising is outrageous for this one.
I like a Gershwin tune; how about you? Hollywood liked them plenty, but there was somewhat less love for the Broadway shows for which many of George and Ira's standards were written. As hit shows their names had commercial potency, but the movie studios really just wanted the songs. Not all of them, though: for William A. Seiter's film of Girl Crazy RKO kept the two towering hits "I Got Rhythm" and "But Not For Me," but did without "Embraceable You." On the other hand, the Gershwins contributed a new (or hitherto unused) song for the film -- but "You Got What Gets Me" hardly counts as even third-rate Gershwin. What did the studio -- producer William LeBaron, director Seiter, and a team of adapters headed by Herman L. Mankiewicz -- think they were getting, and what did they think they were doing? It seems to have boiled down to this: the show that made stars of Ginger Rogers and Ethel Merman on stage struck somebody as an ideal movie vehicle for Bert Wheeler and Robert Woolsey.

Wheeler and Woolsey are one of the acquired tastes of the Pre-Code era. They made a hit as comedy relief in the big-budget musical Rio Rita and became RKO's answer to the Four Marx Bros. At least that was the idea, and it seemed to work for a time, at the time, but in retrospect the duo seem more like RKO's precursors to the Ritz Brothers. Disclosure: I hate the Ritz Brothers. I've never hated Wheeler and Woolsey, but I didn't get them. Woolsey looks and sounds like George Burns's dyspeptic uncle while Wheeler looks the part he played, a pleasant idiot. Together they were "nut" comedians, which means that, like the Marxes, they acted in films not to tell a story, but to act crazy. Like nearly all the Marxes' rivals, they lacked the personalities to make their craziness interesting. But maybe I'd just managed to miss the good Wheeler and Woolsey movies. They did quite a few before Woolsey died in 1938, but I haven't seen many of them -- definitely not enough to get them. Until now.

Reviewing some of RKO's Pre-Code, pre-Astaire musicals, I've noted that they verge on the cartoonish in everything from their comedy to the staging of the songs, that something human is lacking in the absence of a virtuoso performer like Astaire or Rogers. Because we identify RKO musicals with that pair, that inhuman cartooning effect seems like a flaw. In a Wheeler and Woolsey musical, it's a supreme virtue. Shaped to their needs, Girl Crazy comes about as close as early sound comedy could come to a live-action cartoon. You'll feel sure that you've seen some of the gags in cartoons from your youth. You may even see a hint of Blazing Saddles and its town's worship of Randolph Scott in the way everyone in Girl Crazy's western town removes his hat at the sound of the word "west." In all its versions, Girl Crazy is something that happens Out West, but the Seiter Girl Crazy is a ruthlessly irreverent travesty of the West, of the Broadway musical, of whatever you've got. It respects nothing, and in time you realize that it has to take the same attitude toward its source material, to the point that "But Not For Me" becomes but a platform for the obnoxious pre-teen Mitzi Green's long threatened imitations of stage and screen stars. These are actually quite good to the eyes and ears of a Pre-Code buff, but her riffs on the likes of George Arliss, Enda Mae Oliver and Roscoe Ates (a stuttering specialist) only make the film more defiantly obsolete today, adding an F.U. to the modern viewer on top of its similar salutes to everything else. If you can appreciate the way this picture doesn't give a damn what you think of it, then you'll get Wheeler and Woolsey. 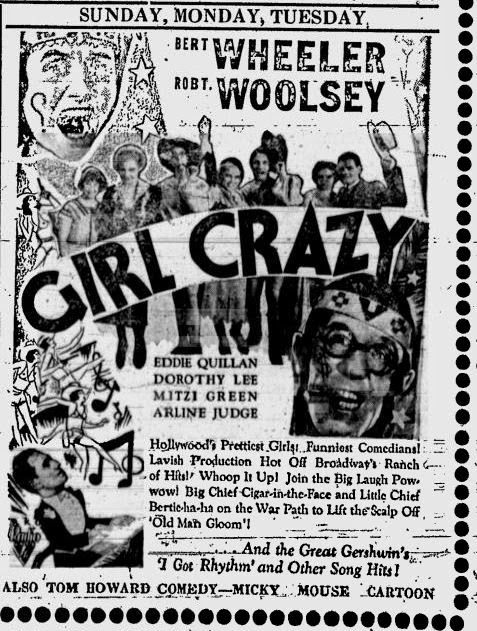 Once upon a time there was this musical on Broadway called Girl Crazy. It was about a wastrel scion of a wealthy family sent west to run a ranch. The boy turns the place into a proto-Vegas, though maybe without the gambling. That's as much as I can get from Wikipedia. That character is still in the Seiter film; Eddie Quillan, a future Ellery Queen, plays him. But his story quickly recedes into the background. What counts is that his plan to turn his ranch into an entertainment destination -- with gambling, draws the professional gambler Slick Foster (Woolsey) westward to run Quillan's tables. Traveling with his nagging wife, Slick seeks the cheapest way to travel and chooses to go by taxicab. The driver is Jimmy Deagan (Wheeler), introduced preparing to drive a nail through his windshield, the sign on it aptly identifying car and driver as "Vacant." Jimmy unquestioningly drives the Fosters across the country as the slapstick gets off to a slow start. Leaving a gas station, the cab somehow ends up dragging a cardboard cutout of a motorcycle cop behind it. It takes a while for Jimmy to realize that the cop isn't passing because he isn't real. The payoff comes after he finally gets rid of the cutout, when he and Slick mistake authentic motorcycle cop Nat Pendleton for the persistent piece of cardboard. Poor Pendleton does his own stunt riding as Woolsey hurls objects at him, hoping to knock the offending attachment loose.

Finally our antiheroes arrive in the self-revering west, where Slick decides that the best way to avoid paying hundreds of dollars in cab fare is to have Jimmy lynched. Quillan's ranch is located in a community hostile to law and order; the sheriffs measure their tenure in minutes and one has just been shot when the taxi rolls in. From here Slick and Jimmy must help Quillan fight the local bully (Stanley Fields) who decides to run for sheriff himself, after killing many of his predecessors, in order to put the screws on Quillan and his resort. Our heroes need a candidate to run against the bully, but know that any candidate is doomed. Naturally, Slick and Quillan agree that Jimmy is the perfect candidate. With the help of Mitzi Green, who seems to have some crush on Jimmy (the actress was 12) and has followed him all the way out west, the good guys steal the election. No matter: the law will have little say in the outcome of the story. Instead, Wheeler and Woolsey will be compelled to disguise themselves as Indians (Woolsey playing a squaw) in a self-consciously outrageous bit made more funny by the presence of a real, "articulate" Native American witnessing the travesty -- until he speaks Pig Latin to the boys and proves himself a true brother, linking arms with them as they dance offscreen. They will plot to poison the bully with hooch spiked with gasoline, but must drink it themselves. Recovering from temporary stupefecation, an intoxicated Woolsey will recall his powers of hypnotism -- the reality of which is demonstraed when a bartender wanders offscreen sleepwalker style. And he will manage to mesmerize himself when the mirror on a door swings into his path as he prepares (he must count to five first) to overpower the bully. In the end, men will again pause to remove their hats in honor of the West, and ceramic urns will fall on their skulls. Quillan will propose to his girlfriend, only to be flattened once, twice, and a third time by a swinging door in the middle of a chase scene -- even the Marxes didn't treat the romantic lead like that.

In this manner Girl Crazy devours itself. Self-immolation might be the better metaphor; it gives you the idea of a spectacle, and the Wheeler & Woolsey Girl Crazy is spectacularly, amorally, triumphantly stupid. I've only described the tip of an iceberg of bad jokes and brazen gags, and I'm only now describing the film's "I Got Rhythm" number, which devolves in RKO style from Kitty Kelly's performance to some attempted artistry with light and shadow to all-out cartoon lunacy as everything from the cacti in the desert to the stuffed and mounted head of a buffalo keeps time with the tune. That's the kind of adaptation this is. It flopped at the box office; even Pre-Code audiences didn't get it -- or couldn't take it. For good or ill, this is one nut comedy that is indisputably nuts.
Posted by Samuel Wilson at 10:57 PM