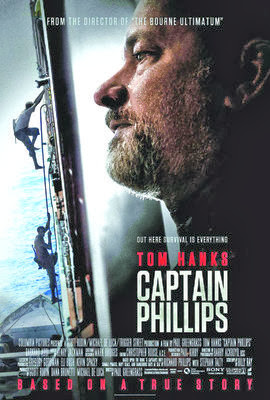 Do children still dream of being pirates? Their teachers do sometimes, if you judge by books that idealize the egalitarian, multicultural or otherwise transgressive pirate republics of yore. You can't do that for the best-known pirates of our own time, the raiders from Somalia who capture ships for ransom off the Horn of Africa. Paul Greengrass's film about the 2009 pirate attack on the Mersk Alabama probably would preempt any fantasies of 21st century piracy, for Captain Phillips makes clear that for Somalis, piracy is little more than a job of work. Greengrass practically drives the point down the viewer's throat by drawing obvious parallels between the life of pirate Abduwali Muse (Barkhad Abdi) and that of his destined antagonist, Alabama skipper Rich Phillips (Tom Hanks). Both men live in an increasingly competitive and demanding world. Muse is under pressure from his elders to earn more money by capturing more ships, and there's intense competition merely for places on a pirate crew. Phillips worries that his kids will face a tougher world than he does, but he already observes that there's intense competition for commands, even on ships bound for dangerous waters -- ships that inexplicably provide no weapons for their crews. At its heart the true story of Phillips and Muse has been the stuff of pulp adventure for generations, yet Greengrass underscores the extent to which both men are really working stiffs. At the same time, he manages to make Muse's assault on the Alabama the most thrilling action sequence I've seen this year. Muse is the picture's villain, no matter how much Greengrass and writer Billy Ray humanize him and his cohorts, yet you'll probably feel a temptation to root for him as he pursues the gigantic cargo ship in his skiff like a rowboat chasing a whale. The Alabama has no weapons but enjoys every other technological advantage, while Muse has no benefit of surprise. Phillips has anticipated pirates and has many means to repel boarders, from high-powered hoses ringing the hull to the high-powered maneuverability that lets the Alabama try to shrug off the boarders and their ladders like gnats. You can't help feeling that Muse's capture of the ship is a triumph of skill, tenacity and pure nothing-to-lose courage. You retain enough of that admiration to agree when Phillips says later that someone like Muse should have more options in life than fishing and piracy. And you may remember enough of the opening scenes to suspect, when Muse answers "Maybe in America" that neither he nor Phillips fully understands how the world is changing.

Greengrass is one of the active directors who's changed the way movies look. His pseudo-verite approach, dating back to his breakthrough film Bloody Sunday, anticipates the artificial immediacy of "found footage" movies while his work on the second and third Jason Bourne movies has given action films a more raw, frantic feel that leaves many spectators disoriented or merely annoyed by their inability to see things clearly. By comaprison, Captain Phillips achieves a kind of epic clarity as Greengrass focuses on the spectacle of the tiny skiff hunting the giant Alabama on the open water, the waves bucking Muse's ship like a bronco. The chase scenes have the spirit of high adventure that the rest of the film is at pains to deny, and the picture is never quite as great once the chase is over. For a while it's like The Enemy Below meets Die Hard as Phillips, his crew and Muse's men play a three-way cat and mouse game, the idea being to keep the Somalis from taking more hostages, until the crew turns the tables on Muse and forces the pirates to quit the Alabama. The film slackens further in its third act, after the pirates have departed on a motorized lifeboat with Phillips as their sole hostage. It grows overblown as Greengrass feels it necessary to show us the U.S. gathering its forces for an assault on the pirates, while the tense exchanges between Phillips and the Somalis (about half of whom speak English) become repetitive. The director stretches the suspense out a little too long for comfort, especially after Muse is taken off the board, tricked into going on board a Navy vessel to join his elders in negotiating Philips's ransom. The other actors playing pirates are good enough to establish themselves as distinctive personalities, but don't have Abdi's paradoxical dead-eyed charisma. All that's left is the Tom Hanks show, as the star goes through phases of pain, terror and shock while enduring one of the most horrific rescues you'll ever see. Hanks gives a solid performance as the flinty captain (complete with "Yankee Irish" accent) but whether he's working the accent or conveying the character's almost-paralyzing trauma post-rescue, someting technical about his acting sometimes comes through to remind you that this is Acting, while Abdi benefits from the illusion of a newcomer's naturalism -- his fine acting may not be recognized as Acting the way Hanks's is. Captain Phillips is sometimes overblown, and Henry Jackman's score nearly always is, but at its best its a very good film that anchors the action and adventure with a disquieting message. The confrontation of Phillips and Muse shows that the rat race has gone global.
Posted by Samuel Wilson at 9:18 PM