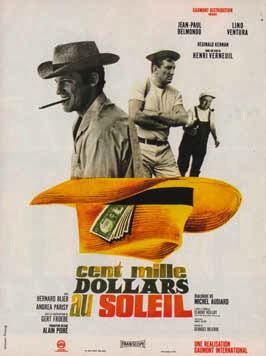 In 1964, when Italians imagined frontier action and adventure they didn't think of their erstwhile empire in Libya but of America and Mexico, and the spaghetti western was born. France's frontier imagination ranged closer to home; the French had a bigger empire in modern times and got more adventure out of it. Deserts and dollars meant different things to different countries. Instead of westerns the French made films like this Henri Verneuil picture, a post-colonial romp through parts of Francophone Africa where Europeans still do much of the work. Rocco (Jean-Paul Belmondo) and his buddy "Bumpkin" (Lino Ventura) drive trucks for Castagliano (Gert "Goldfinger" Froebe), but one day Rocco takes the initiative and drives off on his own with a mystery cargo believed to be worth $100,000, and the boss orders Bumpkin to track him down in another truck. Riding shotgun with Rocco is a femme fatale (Anne-Marie Coffinet) who tipped him off to the valuable cargo. Riding with "Bumpkin" is a suspicious mercenary type (Reginald Kernan)with whom he has issues from the recent past.

The cargo is a Macguffin: Rocco doesn't know what it is and only cares that it can be turned into money. With little sense of urgency in the chase the viewer basks (or burns) in the location atmosphere. Verneuil wasn't the first director, of course, to find a desert ideal for widescreen filming, and even in black-and-white the vistas are often impressive. Cent Mille Dollars is arguably overlong but over its length the impression of grit, heat and sweat sink in convincingly. If it has a handicap it's that Belmondo and Ventura don't share the screen through the big middle of the picture. Once Bumpkin finally catches up with Rocco, only to get his own truck commandeered, the screen crackles with the stars' macho chemistry. Bumpkin's promise of revenge gives the story some momentum it had lacked, and the payoff comes with a comic twist that defines the picture as a buddy movie above all.

It could have been a western. That could have been a stagecoach full of rifles for the Indians, and you would have had a desert either way. But the French still saw their modern world as full of adventure, even as they retreated from empire, in a way the Italians apparently didn't but the Americans still did. If Frenchmen driving trucks makes Greed In the Sun seem like a low-stakes comic riff on The Wages of Fear (recall also that film's exotic setting), it also reminded me of American adventure films from the same time set in far-flung locales, and of the whole "men's adventure" genre in American magazine publishing, down to the dancing girls at the chase's destination. Verneul and his stars give the film a swagger that retains its virile vitality after fifty years. Its modern setting doesn't make it superior to spaghetti westerns by any stretch of imagination, but for those interested in 1964 rather than 1864, or in frontiers other than the archetypal West -- not to mention fans of Belmondo and Ventura -- Cent Mille Dollars is definitely worth a look.
Posted by Samuel Wilson at 9:41 PM