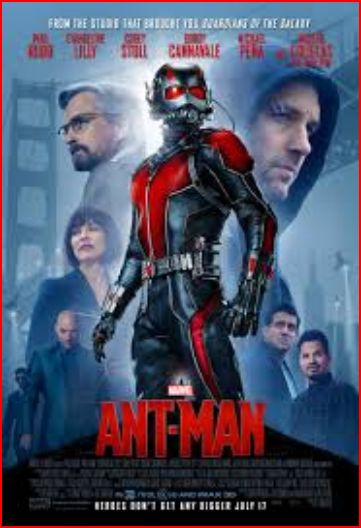 If this seems late, I suppose it was out of respect for Edgar Wright and whatever vision he had in mind that I waited two weeks before seeing the twelfth Marvel Studios production. Wright, one of the great comedy directors of our time, had lobbied Hollywood for years to let him make an Ant-Man movie, only to exit his pet project at the brink of principal photography over creative differences with Marvel. It's clear by now that Marvel abhors auteurs, as is inevitable when the studio's overriding project is the creation of a Cinematic Universe, and it's assumed that the studio wanted Ant-Man to be more Marvel in some way than Wright had planned. The irony, now that I've seen Peyton Reed's film, is that the Marvel elements, the details that link this story to the universe of the other films, are the most interesting thing about the story. I say that as a comics fan accustomed to reading stories in a universal context, while lay viewers may feel differently. For me, the backstory of Hank Pym (Michael Douglas) was infinitely more interesting than the all-too-typical zero-to-hero story of Scott Lang (Paul Rudd), who becomes the title character under Pym's tutelage.

In the Marvel Comics universe, Hank Pym and his wife Janet Van Dyne were founding members of The Avengers, peers of Iron Man, Thor and the Hulk, with Captain America arriving a few months later. Pym was also the creator of Ultron, the evil robot who starred in the second Avengers movie, but for all his historical importance his powers of shrinking (and growing; his Avengers identity was Giant-Man) and control over insects made him something less than first-team cinematic material. The Cinematic Universe has retconned Pym a generation back in time, making him a precursor to the movie Avengers. We meet him in a prologue set in 1989, arguing with a graying Peggy Carter (Hayley Atwell) and a just-plain gray Howard Stark (John Slattery returns from Iron Man 2) over the use of his superscientific "Pym Particles" by SHIELD. During the film proper, we learn that Pym was the original Ant-Man, a super-agent during the later Cold War, who retired following a tragedy involving his wife, the winsome Wasp (an actress is credited with the role, but is clearly a placeholder pending future developments). Grief and secrecy have estranged Pym from his daughter Hope (Evangeline Lilly), who as a board member joined in a hostile takeover of Pym's business by Darren Cross (Corey Stoll), who is basically our old friend the Evil Yuppie/Corporate Guy, only bald in deference to modern fashions. Some reactionary comics fans will look at this guy and say, "Why didn't they cast him as Lex Luthor instead of that geeky kid?" but I think he proved his unworthiness here. Anyway, while Hope remains emotionally estranged from her father, she's grown alarmed by Cross's continuation of Pym's research without Pym's cooperation, fearing the ways Cross might exploit the technology, and is secretly and grudgingly collaborating with Dad to thwart the new boss.

Dad's idea is to hire a capable cat-burglar to learn how to use his Ant-Man suit and sabotage Cross's work. The idea only further embitters Hope, who feels quite capable and entitled to follow in her parents' tiny footsteps. But we can't get Scott Lang into the film otherwise, and I'm afraid we must. Lang is an ex-con, having pulled off some nigh-impossible corporate burglary that's given him a Robin Hood reputation in some quarters. But he's introduced to us with a nearly-fatal half hour of sad-sackery as the poor man has trouble finding and holding a job with his criminal record. His wife has left him for a cop, but Scott's daughter still adores him, as does his criminal sidekick Luis (Michael Pena). Luis and his buddies want Scott to resume his burgling career, and it turns out they're all being manipulated by an all-seeing Hank Pym, who wants to maneuver Lang, whose past exploit impressed him, into a position where he can be properly propositioned. Suffice it to say that Scott and his merry men become Pym's strike force. Scott himself must learn in typical painful fashion how to utilize his new size-shifting abilities while a belligerent Hope teaches him the finer points of combat in the genre's alternative to meeting cute. They all have a rapidly closing window of time to do their thing, since after numerous failed experiments (that reduce sheep and men to little globs of gore) Cross apparently has perfected his enhanced "Yellowjacket" suit, and plans to sell the tech to very bad people. In practice he proves a very bad person himself, as explained by an almost throwaway comment about the psychological damage done by overuse of Pym Particles. It's all for the best, though, for otherwise Scott would have no one to fight.

Ant-Man has one of the weakest ensembles of any Marvel film. Douglas is all right but nothing special as an eminence gris, while Evangeline Lilly, who hasn't gotten many good reviews, actually strikes the right note of belligerent entitlement as a future Wasp. And that's about it. Rudd is generically glib apart from the justified self-pity the plot requires of him -- and how many of you out there are sick and tired of the whole zero-to-hero thing? It shows no sign of going away soon, as recent the asinine comments of Guy Ritchie and Charlie Hunnam regarding King Arthur demonstrate, but as much as its advocates think its the only thing keeping heroic characters from boring us to death, zero-to-hero is starting to bore me to death. For a while I was wishing Marvel had made a period piece all about Hank and Janet, but once Hank takes over the Scott storyline the movie settles into a satisfying caper picture with some impressive special effects illustrating the predicament of a suddenly shrunken man. But before I praise Ant-Man I have to damn the post-Wright writers (including Rudd) who made Scott's sidekicks into three ethnic stooges. I try not to be "politically correct" about entertainment, but it did make me a little uncomfortable to see Scott's buddies -- Hispanic, black and Eastern European -- react with superstitious hysteria to Scott's demonstration of his new suit. Michael Pena is particular is embarrassing, not because he's a Hispanic actor playing an idiot, but because it's hard to imagine the idiot Pena plays surviving more than an hour as a professional criminal.There probably is a little too much Marvel in the picture, including a gratuitous cameo by Anthony Mackie as The Falcon that sets up the post-credits teaser, which is itself a staggering anticlimax to Captain America: The Winter Soldier. But much less Marvel would have made Ant-Man hard to endure. I'd like to think that Wright would have written (or did write) a much funnier film with better comic acting, but who can say? What we have is an Ant-Man that just manages to transcend its troubled production, and maybe only because, contrary to what Wright may have wanted, it's really part of a larger whole that actually makes it worth our while.
Posted by Samuel Wilson at 9:03 PM

As I wrote in my review, I think there are some elements of Wright's that were left in, though I can't tell which, since I haven't seen any of Wright's films. Rudd was servicable, but this wasn't on the same level as Guardians of the Galaxy last year. Like Guardians, they began teasing a romantic subplot, which went a bit further here than it did in Guardians.

The only other alternative would've been to make this an animated cartoon, something Marble is loathe to even attempt at this point. On the other hand, DC would see the box office success of this film, and maybe they can green-light an Atom film, which has a better backstory....

I am in no rush to see this film, though my kids are chomping at the bit. Sounds like the ensemble and other issues are not calling out for decisive action. A terrific piece of writing here.

Hobbyfan, DC/Warner Bros could have scooped Marvel by better utilizing the Ray Palmer character on the Arrow TV show last season. Palmer is DC's shrinking hero, the Atom, but the Arrow producers wanted a generic superscience character and have only teased that Palmer might use his super suit to shrink some day. For now, though they still call him "the Atom," he's pretty much an Iron Man rip-off.

Sam, apart from family duty there's no special reason to rush to Ant-Man unless you're really into the whole Marvel thing, and there's nothing mandatory about that.

Having seen Atom appear on Flash as well, seems that Team Berlanti are biding their time. Maybe they were waiting on Ant-Man themselves.

OBTW, are you taking a chance on blowing your cover the way you signed your reply post?