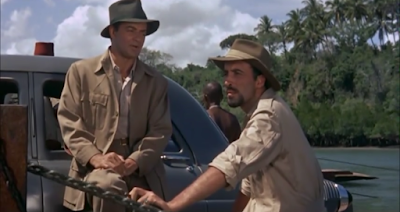 Here's an unpretentious but colorful programmer George Marshall directed for Columbia Pictures that features a fun star turn by Cornell Wilde, one of Christopher Lee's more substantial pre-Dracula parts, and a vivid combination of African location shooting by Freddie Young. The story, adapted by Richard English and Gene Levitt from an apparently unpublished story, is pure pulp. Wilde plays Matt Campbell, an amiable boor who arrives in Kenya to learn that his brother, a uranium miner, had just been killed. He was the victim not of the Mau-Mau, those predictable villains of a contemporary cycle of African movies, but of a resurgent cult of leopard men, sacred killers who don leopard skins for their dirty work. Matt wonders whether that's the truth of a story someone else made up, as his brother had some questionable business associates, particularly the sleazy white hunter Gil Rossi (Lee) and fellow miner Hastings (Ron Randell). Possibly more dependable are the missionary Ralph Hoyt (Leo Genn), an expert on the leopard cult, and his anthropologist neice Ann Wilson (Donna Reed). Rossi, Hoyt and Wilson take Matt to the site of the mine, which "clicks" according to the last letter from Matt's brother, which means whoever owns it has a fortune. Matt's his brother's heir, Hastings was his partner and Rossi was a 1,000 pound investor in the project. Matt instinctively looks on the other men with suspicion, but they're not the only people he has to worry about, as the leopard men seem to be all too real... 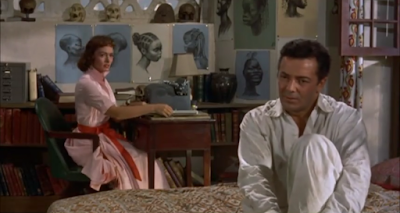 Cornell Wilde flirts with Donna Reed in Beyond Mombasa 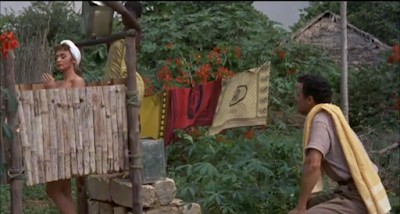 Once Ralph Hoyt admitted he was only a lay missionary you could add him to the list of suspects, especially since Genn gives the sort of meek-and-mild performance that becomes increasingly suspicious as the film proceeds into the jungle, arriving finally in the ruins of an older civilization where our protagonists end up besieged by the leopard men and a white ally. I will spoil things only partly by letting you know that even before audiences identified him with movie villainy, Christopher Lee made a good red herring. 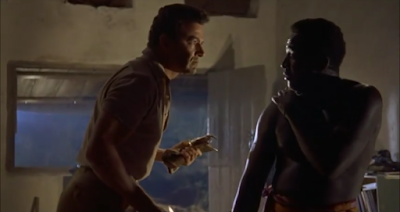 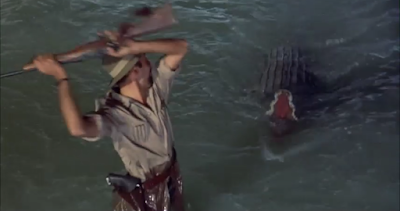 Wilde, who would famously return to Africa for his own project, The Naked Prey, is easily the best thing about Beyond Mombasa. His Matt Campbell is a bit of a goon, a tough guy who'd been working in Saudi Arabia before this opportunity turned up, a master of drunken fighting but also terrified of the local wildlife, including a chimp the Reed character decks out in a dress for nebulous purposes of scientific observation. Once they're on safari and under fire -- from spears, blow darts and rocks, that is -- Matt becomes more of a standard he-man hero, but his blatantly flawed nature earns our interest and sympathy more than if he'd been too good at everything to be true. 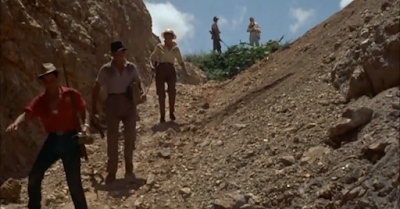 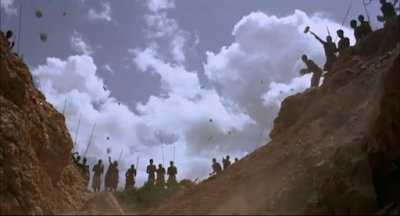 The three-way bickering of Wilde, Lee and Randall keeps things pretty hard-boiled most of the way, and when the film finally goes over the top it has the lurid flavor of men's adventure magazines of the period. I like that in a Fifties movie, and while Mombasa has no delusions of grandeur it does provide 90 minutes of two-fisted fun for those who appreciate that sort of thing.
Posted by Samuel Wilson at 7:16 PM