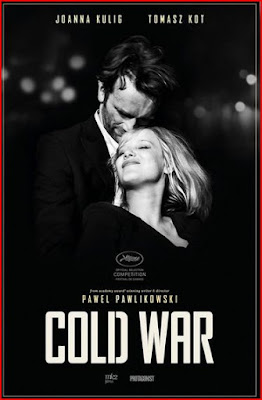 Pawel Pawlikowski's follow-up to Ida, though mostly praised by critics, didn't have the same impact in the U.S. as the earlier, Oscar-winning film. The lack of a Holocaust angle in the new film may be the simplest explanation for this, but Cold War itself may have been a little too foreign -- which is to say too nationalist -- for American art-house tastes. It marks a territory of tragic Polish exceptionalism that has no true home in either the Russian-dominated east or the American-dominated west, though the film has little or nothing to say about the U.S.A. or actual Americans. Instead, it asserts a nebulous Polish authenticity apparently incapable of true expression in the film's Cold War setting. The nebulous element finds form in the film's heroine, the aspiring singer Zula (Joanna Kulig), who pretends to be a peasant in order to join a folk-singing troupe organized in the late 1940s by musicologists Irena (Agata Kuleza) and Wiktor (Tomasz Kot). Wiktor falls in love with Zula, and the romance keeps him with the troupe after Irena quits in futile protest against the Communist government transforming it into a Stalinist propaganda vehicle. Its propaganda function allows the singers to tour the eastern bloc, including East Berlin, where Wiktor, as artistically frustrated as Irena, hopes to defect with Zula to the west. Alas, Zula never makes the rendezvous, so Wiktor defects alone.

Later in the 1950s, the troupe travels the wider world, and in Paris Zula encounters Wiktor again. Our hero will find a variety of work in the west, from composing film scores to playing in a niteclub jazz band. He still hopes to bring Zula to the other side, but his efforts to transform her into a jazz singer, including arranging a cool-jazz version of the folk tune that serves effectively as her theme song, only estrange them further. The issue isn't that she dislikes modern music -- she's seen dancing to "Rock Around the Clock" almost as a form of protest -- but that Wiktor is trying to make her into something she isn't for no good reason. Wiktor seems to realize this, too, and you could argue that for him she embodies the true Poland, to such a degree that he risks certain imprisonment in order to return home to be near her. In a melodramatic scenario mercifully underplayed by all involved, Wiktor can only be freed from prison by Zula marrying the party hack (Boris Szyc) who corrupted the folk troupe in the first place. In true melodramatic fashion, she becomes a lush until Wiktor finally emerges from prison, his artistic career apparently mangled (with his hand) beyond repair. With it already established that the west offers no real escape for them, the only remaining option is romantic suicide -- again carried out with respectable understatement. A point is made nevertheless, presumably one that found an appreciative audience in a newly-nationalist Poland. Cold War isn't exactly saying "a plague on both your houses," but it does say quite clearly that the freedom promised by the west wasn't really freedom, at least for some people -- or else that the west's freedom wasn't enough for some people.  Wiktor seals his fate, against the advice of a harshly realistic Polish diplomat, with the explanation, "I'm Polish." What being Polish entails, if not what it actually means, is Cold War's ultimate subject, and it should be no surprise that, good as the film is -- strongly acted, sharply shot, admirably succinct -- it doesn't travel as well as Pawlikowski's previous effort. It should do no harm to his reputation, however, and whatever he does next is sure to be, most likely deservedly, an art-house event.
Posted by Samuel Wilson at 6:23 PM