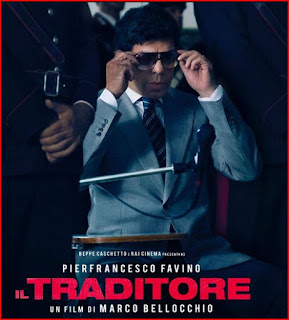 At age eighty, and after more than fifty years of filmmaking Marco Bellocchio is arguably the elder statesman of Italian cinema. In the 21st century he's become an intermittent chronicler of Italy's 20th century. His latest film is a companion piece with his 2009 Mussolini film Vincere and his 2003 Aldo Moro-Red Brigades picture Good Morning Night. The "traitor" of this one is Tommaso Buscetta (Pierfrancesco Pavino), Italy's answer to Joe Valachi: the first man who spilled the beans on organized crime in his country in a major way. This happened in the 1980s, after Buscetta, a career criminal and ex-con, decided to leave the business and move to Brazil, where he had done "business" before. Relatives who remain in Italy, including two sons, are killed in a Mafia war, while the Brazilian government accuses him of drug trafficking. The Brazilian government of the day didn't play around; they try to force a confession by threatening to throw Tommaso's wife (Maria Fernanda Candido) from a helicopter into the ocean. Whether he had anything to confess or not, Buscetta ends up back in Italy, where he decides that he has actual stuff to confess to crusading prosecutor and eventual martyr Giovanni Falcone (Fausto Russo Alesi). He becomes the star witness at the so-called Maxi Trial, which becomes the film's central spectacle. For non-Italians, the unusual trial procedures stand out, particularly allowing defendants to cross-examine witnesses. This makes possible dramatic confrontations between Buscetta and his former colleagues, who naturally call him a liar when they aren't heckling him as a cuckold from their cages in the rear of the vast courtroom. Buscetta holds his own in these encounters -- though he fares less well later when he lobs accusations at politicians who clearly can afford better lawyers than mafiosi can -- but he hardly can enjoy his victories when the bosses are convicted. He knows all too well that the Mafia's reach and memory are long. Exiled in an American witness-protection program, he retreats from New Hampshire to Colorado after a restaurant singer in a Santa costume serenades him in Sicilian dialect as if he were the coward Robert Ford. To the day of his peaceful demise he has to remain on guard, because he knows the Mafia like he knows himself....

Accustomed as U.S. audiences have become to expansive, seemingly comprehensive Scorsese-style chronicles of crime, Il Traditore can't help seeming incomplete no matter how well made and performed it mostly is. We're likely to become conscious of gaps or omissions as Buscetta clarifies his motives for informing. He tells Falcone and the judges at the Maxi Trial that he still considers himself a "man of honor" but that his peers, particular Salvatore Riina (Nicola Cali) were the true traitors to the traditional values of La Cosa Nostra by going all in on the heroin trade, regardless of its cost to their own families. Something can't help but seem missing when Buscetta repeatedly reiterates how Riina has ruined La Cosa Nostra, yet Riina has a relatively minimal presence in the film and we see very little of the "golden age" Buscetta idealizes -- which we definitely would see in a Scorsese epic -- before Riina took over. Rather than show this idealized past, Bellocchio challenges us to take Bruscetta's word for it or question his actual motivation. The director presents the past in non-linear fashion rather than giving us a conventional rise-and-fall narrative. The film's flashbacks aren't self-consciously narrated by Bruscetta, but arrive more like unfiltered memories, though one important reminiscence midway through the picture is interrupted and only taken up again at the very end.  An exception to the general rule is a flashback to the murder of Buscetta's sons, based on the testimony of a new informer who took part in the killing. This scene, and Buscetta's reaction to the testimony, suggest guilt over abandoning his children to almost certain death as the his ultimate motive, since his indifference to whether they joined him in Brazil belies his claim that his real family ultimately mattered more to him than the Mafia family. In the end, I think, Bellocchio is too careful to offer a perfect "Rosebud" explanation for Buscetta's "treason." He keeps a certain distance from his subject that is arguably European if only by comparison to Hollywood's insistence on definitive answers. Overall, I rather like Favino's performance for its comparative understatement. He makes Buscetta seem like a real person rather than an archetype. I don't know if Favino and Bellocchio have given us the "real" Buscetta -- alternate presentations seem possible -- but they did make me want to know more about the man, and that should count as some kind of success.
Posted by Samuel Wilson at 8:33 PM