Less than five months after its Swedish premiere, Ingmar Bergman's newest has its American premiere in New York City. 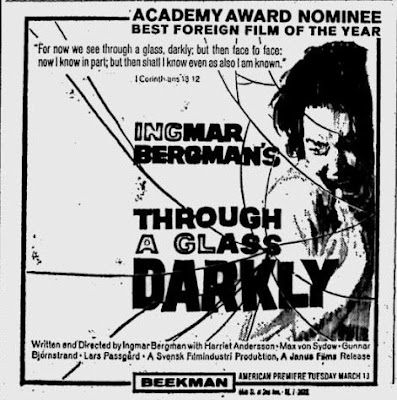 This film will go on to win that Best Foreign-Language Film Oscar -- and Bergman would get nominated again the following year for writing it. As Tino Balio noted in The Foreign Film Renaissance on American Screens, Janus Films did a brilliant job establishing Bergman as a brand name. We can see a sample of their salesmanship in this trailer, uploaded by MagicWorksofBergman.

The trailer's a historic artifact in its own right. Notice how it flaunts the good word of Bosley Crowther, the New York Times reviewer who was already a byword for philistinism in some quarters yet actually played an instrumental role, as Balio notes, in promoting the foreign-film boom starting back in the 1940s. Notice, too, how some reviewers were so well known that their first names could go unmentioned. It's either that, or the names didn't really matter at all, just the papers. But were they right? Only those who've seen this one can say.
Posted by Samuel Wilson at 10:42 PM