Remember what I said a few days ago about a mini 3D boom fifty years ago? Here's another example: a 1960 release opening in Milwaukee. 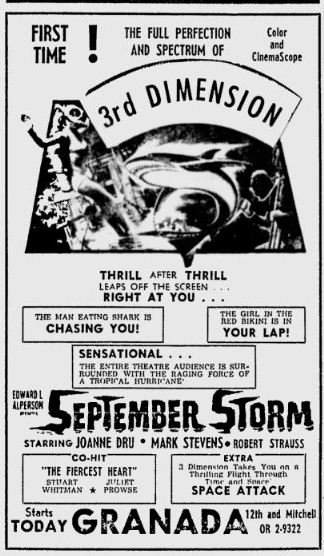 September Storm is reportedly the first 3D film made in Hollywood since the original 1950s boom, and specifically the first since Revenge of the Creature in 1955. "Space Attack" is actually a stop-motion animated short originally known as "The Adventures of Sam Space." The Fiercest Heart doesn't seem to fit in: it's a "flat" historical adventure pitting Brits and Boers against Zulus in 19th century South Africa. Anyway, here's Sam Space, as uploaded to YouTube by HISTORYSTEREOCINEMA. Looks like you might see something if you have the glasses.

Still in Milwaukee, here's a Korean War drama seen by some as a precursor of The Dirty Dozen. 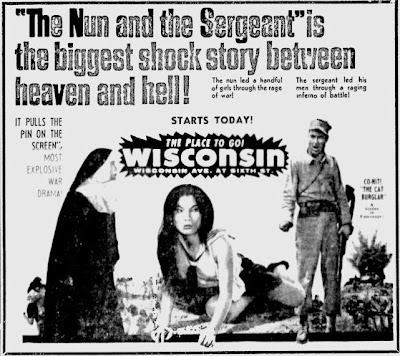 It pits misfit mutinous Marines against Catholic Korean schoolgirls behind enemy lines. I'd give it a shot. But that's because I've already seen this attraction opening in the same city. 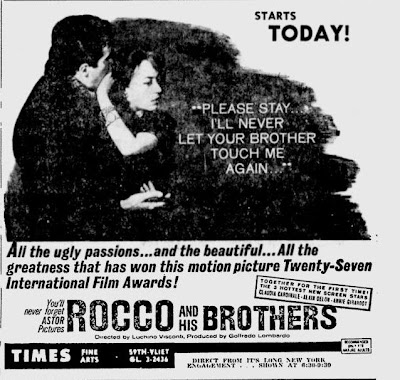 Astor Pictures had kicked the door open for Italian pictures by releasing La Dolce Vita. Luchino Visconti's equally-long neorealist melodrama was Astor's follow-up. It's a worthy one but didn't quite catch the global zeitgeist the same way. To give you an idea of the market for foreign product, three of the five 1961 Academy Award nominees for Best Original Screenplay are foreign, including Dolce Vita.
Meanwhile, in Massilon OH, Oscar hype is in full swing. 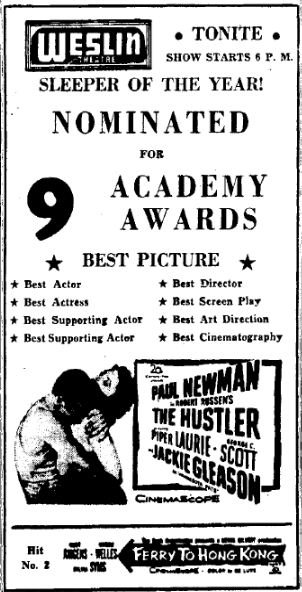 The Hustler has been rolling out across the country for at least the past two months, but now with all those nominations the picture is penetrating even more markets. Interesting to know in retrospect that this classic from 1961 was considered a "sleeper" at the time. Its rivals for Best Picture are Fanny, The Guns of Navarone, Judgment at Nuremberg and West Side Story. It's too late to submit your Oscar pool picks, however.
Posted by Samuel Wilson at 6:00 AM

Email ThisBlogThis!Share to TwitterShare to FacebookShare to Pinterest
Labels: 1962, U.S.