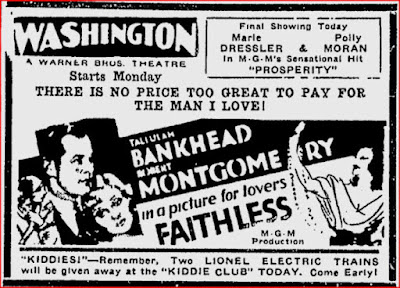 Contemporary reviewers panned Harry Beaumont's M-G-M Depression romance, deeming it another defeat in star Tallulah Bankhead's attempted conquest of Hollywood. One of the main complaints was an overcomplicated plot. Though the picture is only 76 minutes long, critics complained of false endings as if impatient to go home. But it's that same ingenuity at finding ways to make things worse for the heroine and hero that makes Faithless a genuine if cliched Depression document. Tentatively titled "Tinfoil," (meaning what?) the picture pairs Bankhead as an heiress with Robert Montgomery as an ambitious and proud ad writer, both riding high by their respective status as the Depression deepens around them. The picture opens with a montage of newspaper predictions of the Depression ending in 1930, in 1931, and in 1932, scored with sardonic musical horselaughs. While this goes on, Bankhead and Montgomery bicker over whether she, like a good wife, should live on his $20,000 a year salary -- very good money back then but far below Bankhead's standard of living. The movie seems to set the female up for a fall, but its main point proves to be that both are too proud. The crisis finally comes when Bankhead learns that her trust fund has gone bust, moments after she's decided to make up with Montgomery after their latest fight. She goes to his office and tells her story straight, hoping he'll believe that she's not now after him for his money, only to learn that he's been laid off that same day. He promises to find work and support her, but she thinks she can live off her name and reputation and spends the next months mooching off her fellow socialites, finally selling herself, more or less, to arriviste families who still hope to gain prestige from getting mentioned as her hosts in the local society pages. This career ends in Chicago, where Peter Blainey offers her more money in return for, shall we say, more sociability. Blainey is played by Hugh Herbert, one of Warner Bros.'s comical rakes (he's the one who goes "woo woo"a lot) who just about steals the picture with a pretty much straight portrayal of a repellently vulgar predator. Ashamed of her lot after a random encounter with Montgomery, Bankhead abandons Herbert and, lacking practical skills, ends up on a breadline, finally selling her good shoes to a landlady to make her rent and have money left over to eat. Almost too sick to eat soup in a diner, she meets a forgiving Montgomery again and accepts his latest proposal, which comes with the income of a truck-driving job. The same day that they're married his employer goes out of business. He finds another job soon enough, but it means being a scab. The strikers explain that they're fighting to survive, but despite Montgomery's sympathies the job is the only way he and Bankhead can survive now. The strikers run his truck off the road and internal injuries confine him to bed. The only way Bankhead can raise money for his medical needs is ... well, this is a Pre-Code picture, so you figure it out. She touches bottom when she unwittingly propositions Montgomery's brother, who never liked her and now promises to denounce her to his brother, and then gets caught by a Catholic cop who threatens to throw her in jail for a month unless she kisses the Cross and swears not to walk the streets anymore. The cop proves compassionate, however, and blackmails a restaurant owner into giving Bankhead a waitressing job -- he'll cite the guy for violating an awning ordinance otherwise. Now all that's left is how to deal with hubby when his brother tracks him down with the terrible truth....

It is a pretty melodramatic and episodic story, and to a film critic it probably would seem like a cliched catalogue of misfortune. But don't you suppose the Depression was like that for a lot of people? I don't know if anyone in real life fell as far as Bankhead's heiress does here, but the point is that here M-G-M acknowledges the misery of the Great Depression in a manner more typical of Warner Bros. That probably looks like a retroactive virtue, since its relevance may have mattered less at the time than its unconvincing contrivances. But that relevance makes it worth seeing for Pre-Code buffs, as does the potentially camp spectacle of Tallulah Bankhead suffering through the crisis and Herbert's unexpectedly nasty turn. At the least it's another Hollywood film that addresses the Depression -- one reviewer even claimed it was the first to make the Depression the "villain" of the piece -- compared to how many studio films today that address the Great Recession? Faithless may have told its tale with cliches and melodrama, but it was trying to tell some truth as well, and for that history might add a star or a half to its rating.
Posted by Samuel Wilson at 8:28 PM

Yes agreed. The cliches are there, and no doubt it is episodic and melodramatic like a number of other films at this time, it does deal with the Depression. As we know William Wellman particularly was a master of this focus. Anyway, nice work here, I haven't yet seen this one!

Sam, Faithless does feel like a Wellman without Wellman sometimes, though he did direct at least one Pre-Code for M-G-M. His sympathies were more with the always-struggling classes than with the impoverished rich, so I doubt whether he would have found this congenial subject matter, but Harry Beaumont and this film's writers did have their hearts close to the same place.