Pre-Code cinema is beloved by many for an almost quaint though sometimes still vital transgressiveness, but here's a Pre-Code picture that's probably more transgressive now than it was when it was released. The reason is obvious: William Wellman's movie, yet another from his torrent of work for Warner Bros., features Edward G. Robinson as a Chinese man -- and not just a man, but a "hatchet man," the designated executioner for a Chinatown tong. Apart from bit players and extras, all the speaking parts are played by white actors in "yellowface" or slant-eyed makeup, including ingenue Loretta Young. If The Hatchet Man is not quite as transgressive as, say, the Amos 'n Andy vehicle Check and Double Check, it's only because Wellman and his team aren't consciously out to mock another race. In fact, they, like the playwrights whose work The Honorable Mr. Wong they adapted, probably thought they were honoring the humanity of the Chinese people, and by the standards of their own time they probably were. Even if we can't take that pretense seriously, there's an interesting mix of ethnic stereotypes and melodramatic conventions, as well as an attempt to transcend both in a matrix of self-conscious modernity before a violent finish.

Robinson is a strange presence in a role and plot more suited to the late Lon Chaney Sr. Perhaps because someone perceived an "Asiatic" cast to Robinson's Romanian-Jewish features, he plays his part with only minimal makeup, compared to the rest of the cast. From certain angles, or under certain lighting, he seems not to be wearing "oriental" makeup at all. Nor does he attempt a Chinese accent, but neither do any of the other actors. What we get instead is the sometimes stilted dialogue that signified "foreign" in American pop culture, though this movie swings back and forth from the stilted "honorable" manner -- you could play a drinking game based on the use of that word -- to casual "Number One Son" type dialogue for the younger generation. Had the film been made a decade earlier, it probably would have been a Chaney vehicle. But with Robinson, Wellman and Warners involved it becomes more than anything Chaney or his usual collaborators might have made of it. But the story still reads like a Chaney film. It opens with a prologue set "fifteen years ago" with Wong Low Get (Robinson) reluctantly obeying orders to eliminate an old friend, who just happened to have written Wong into his will. Obviously it's not a comfortable situation for anyone, but the victim sees no reason to rewrite his will, which stipulates that Wong is to raise the victim's daughter as his own, and then marry her. The little girl is in the next room playing with a doll as Wong discreetly closes the door leading into her room before sadly doing his duty. We see his shadow pitch his trusty hatchet at the victim's head, and Wellman cuts to the girl's doll, which has just lost its head.
Over the next fifteen years Chinatown has modernized, and a text crawl informs us that tong wars have become a thing of the past. Wong Low Get has modernized and wears modern American clothes in his office. Implicitly repudiating the old ways that led him to kill his friend, Wong is all for modernity, defending his secretary's right to show off her sexy calves -- it's an improvement on footbinding -- and his daughter's right to get a modern education. Wellman cuts abruptly from Wong's high-minded hymn to self-improvement to the daughter, Toya (Young) partying at a dance hall with her unsavory Americanized boyfriend Henry (Leslie Fenton) until she slaps him for getting too fresh. Whatever her plans for the future, Wong intends to carry out his obligation to marry her, but first has to nip a new tong war in the bud. While he goes to negotiate a settlement in his old haunt of Sacramento, the local tong assigns Harry to bodyguard Toya. In Sacramento, Wong finds that a lone-wolf American gangster has been egging on the rival tong. The round-eye says the war will go on until he gets what's coming to him. A newspaper report of his death makes clear that he did get his. Upon returning, Wong discovers Toya and Harry engaged in heavy petting. He's faster with his hatchet than Harry is with his gun and practically chops the younger man's hand off disarming him. Toya refuses to see Harry die, reminding Wong that he swore never to deny her happiness and affirming her love for Harry. This brings on the big moment of melodramatic renunciation as Wong lets both young people go. A Chaney film may have ended here, but the worst is yet to come.

By sparing Harry and surrendering Toya to him, Wong has lost face in a big way. His tong cronies now see him as a coward and shun him. Worse yet, they boycott him, ordering everyone in the tong not to do business with him. They taunt him by delivering a coffin and reminding him that it should hold either Harry's corpse or the remains of Wong's honor. The coffin proves only another thing Wong can auction off after he loses his business. He resigns himself to lowly farm labor until a letter in English arrives from China. To the surprise of probably no one in the audience, Harry proves an asshole and a loser. Caught trying to sell opium, he gets deported, and since Toya never got a birth certificate, she's stuck back in China with him, in a state of "living death." Now she realizes that she loved Wong all along, but as far as Wong is concerned it's never too late to get good new. Now all he has to do is scrape together his savings, get his hatchet out of hock, work his way across the Pacific as a coal stoker, and find Toya somewhere in China. After a lot of walking -- we see him getting his shoes repaired, apparently not for the first time -- he finds his girl, whom the opium-addled, nightmare-haunted Harry has sold to an innkeeper. This discovery sets up an ending that the original audiences reportedly found shocking for its violence yet satisfying in its consequences. 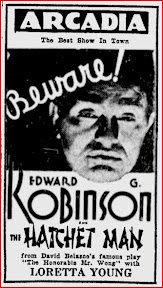 Like Wellman's The Public Enemy, The Hatchet Man is suggestively rather than explicitly violent much of the time. It's most shocking in its presentation of the consequences of violence, echoing Public Enemy in showing us a dead man trussed up and left upright and topping it by having the victim topple backwards off a pier into the ocean. It's that moment that provokes the long-peaceful Wong to take up the hatchet again, and the whole sequence of discovering the body of an employee and fishing him out of the water is the most powerful scene of the picture. At other moments Wellman, admittedly a man in a hurry in those days, misses the mark. He stages an elaborate opening sequence on an impressive Chinatown set as the neighborhood battens down the hatches for a tong war, but he dissipates the impact of his tracking shots by repeatedly cutting back to the image of a war banner every time a gong sounds. There's nothing wrong with crosscutting, but when your alternate shot is nothing but a static image, there's hardly a point to the practice. Overall, the film has nice sets and overall production design, but too many of the players are unconvincing as Chinese people despite heavy makeup (Young's being nearly the heaviest and Fenton's simply the worst) while Robinson makes so little effort to be Chinese, apart from a few "honorables" and the occasional proverb that suspending disbelief is nearly impossible. Robinson remains so compelling a presence, however, that you can just about accept Hatchet Man as just another Robinson picture, which is hardly a bad thing.

You might argue that Robinson's resistance to the expected chinoiserie is in keeping with the picture's implicitly critical stance toward both Chinese stereotypes and old-timey melodrama and pathos. The two phenomena go together: it takes stereotypical character types, not excluding white ones, for the old melodramatic conventions to work, for people to behave in the self-denying, "honorable" ways melodrama demands. Modernity doesn't have to settle for conventions. Toya doesn't have to bind her feet. Wong doesn't have to settle for whatever solace follows from supposedly having done the right thing. Pre-Code audiences -- that is to say, Depression audiences -- weren't as impressed with the pathos of renunciation as they might have been in the otherwise Roaring Twenties. They responded to survival ethics and applauded characters who played to win, from gold diggers to hatchet men. If they could see Robinson's hatchet man as a hero, despite his less-than-superficial otherness, then maybe Hatchet Man was a progressive picture after all. You just wish a little that Warners could have found work for some more Chinese actors during hard times. If they couldn't do without Robinson, then at least he could have buried a hatchet in Keye Luke's bean to save Anna May Wong's honor. But lapses in sensitivity and taste are part of Pre-Code's strange charm, and while they may not redeem this picture for most modern observers, Hatchet Man's somewhat self-conscious struggle with its own stereotyped nature makes it another item of interest for those fascinated by the era, warts and all.

Warner Bros. was great about preserving their trailers, and here's one for The Hatchet Man, courtesy of TCM.

Enjoyed your review of this one a lot, Samuel. I saw this a while back, sadly in a dire print as TCM in the UK never shows 1930s rarities like this - but glad to have seen it anyway. I agree with you that it has dated badly because of the casting of white actors in yellowface, but also that it is still fascinating to watch nonetheless, both for its links with Wellman's other gangster movies and for Robinson's fine performance in the lead. (I remember someone posted a comment on my review of this film saying that the studios would never cast a white actor opposite a Chinese-American actress and so once Robinson was cast, it was inevitable that the lead actress would be white too - I don't know about the studio policies on this myself, but it sounds all too likely.) In any case, your comment about the film's "somewhat self-conscious struggle with its own stereotyped nature" really hits the nail on the head.

Judy, Hatchet Man seemed to have fallen into the "grey market" for a time before Warners reasserted its rights. I remember that it was once available for viewing at archive.org, but that's no longer the case. You're probably right about studio logic, which in this case would have a domino effect dictating that Harry would also be played by a white guy. You probably couldn't have an authentic actor play anyone superior or socially equal to Robinson's character either, which would explain why the only genuine Chinese performers play subordinates to Wong, or serve as extras.