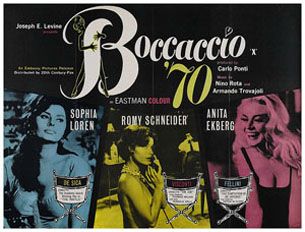 Boccaccio '70 is neorealism on steroids. 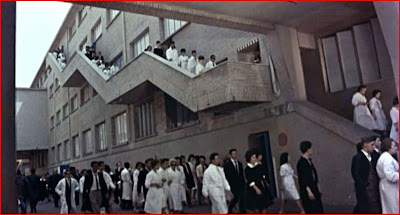 Boccaccio '70 is magical realism on HGH. 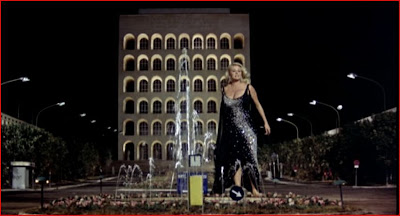 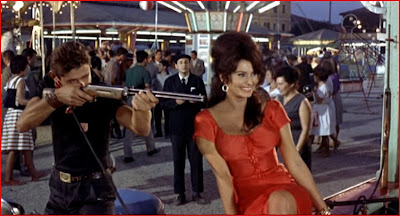 Boccaccio '70 is also a pretty dull comedy of manners with a young, civilized Tomas Milian and a young, pretty Romy Schneider. 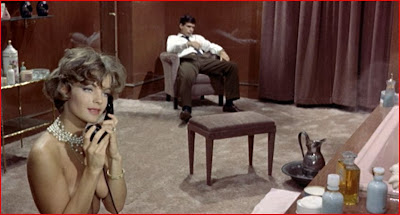 But most of all, Boccaccio '70 is a big, barbaric chest-beating yawp by the Italian movie industry at the peak of its prestige, a flag planted in the heart of the wild world of cinema with the declaration that Italy rules the earth. A collaboration between the producer Carlo Ponti, U.S. moneyman Joseph E. Levine, directors Mario Monicelli, Federico Fellini, Luchino Visconti and Vittorio de Sica, this massive portmanteau film followed two Italian triumphs: the staggering global rollout of Fellini's La Dolce Vita, which was one of the top U.S. releases of 1961, and Sophia Loren's unprecedented Best Actress Oscar win for a foreign-language role in de Sica's Two Women. It didn't hurt that Loren had also been in another international smash, Anthony Mann's El Cid, that same year, or that Fellini's part of Boccaccio was going to reunite him with La Dolce Vita's Anita Ekberg.

Italy is fairly raging with creativity in 1962. Bernardo Bertolucci is about to release his first film, The Grim Reaper. Michelangelo Antonioni will release L'Eclisse, while Gualtiero Jacopetti, Franco Prosperi et al are about to stun the world with Mondo Cane. Mario Bava is taking a breather before unleashing Black Sabbath, The Girl Who Knew Too Much and The Whip and The Body the following year. No one knows what a giallo or a spaghetti western is, but they're all about to learn. Let's say that, going into the decade, the U.S. and Japan are the superpowers of cinema. While France is developing advanced forms of psychological warfare with the Nouvelle Vague, Italy is the doomsday machine of the movie world during the 1960s. Boccaccio '70 was one way of saying that this was going to be their decade.

So naturally the Italians fall on their face practically coming out of the gate. After well-received Italian preview screenings, Ponti decides, apparently under pressure from Levine, that he's going to cut Mario Monicelli's segment out of the international release of the movie. Levine thinks it makes the film too long (it still ends up over 2.5 hours) and it lacks any star names. The decision pisses off the other three directors, who boycott the Cannes festival showing of the movie. The NoShame DVD release of Boccaccio '70 is the first time most Americans will see what was meant to be the opening segment of the film. And it's the best of the four! 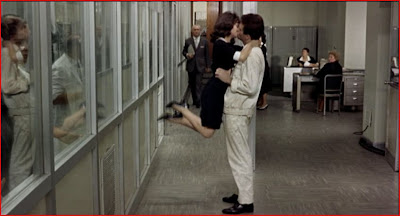 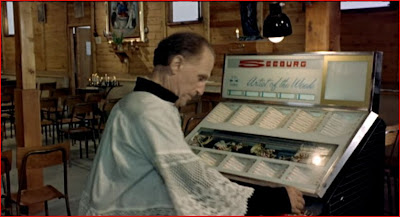 Monicelli, now the sole survivor of the Boccaccio team and at age 94 only three years past his last film, may be known to film buffs as the director of Big Deal on Madonna Street. I haven't seen that and I've seen nothing else by the man, but on the strength of "Renzo and Luciana" I'm going to have to fix that. It's a pretty simple story: a young couple of working stiffs have to try to keep their marriage a secret from the bride's boss, since married women can't work for that company. But the pretense of single status leaves her prey to the tubby, icky head bookkeeper's romantic attentions. Meanwhile the couple struggle to establish some kind of private space for themselves, hoping to escape life in her family's crowded apartment. Monicelli's job is to convey how crowded their life is. He manages to make his episode look like it has a cast of thousands by shooting on location at crowded ballrooms, public pools and movie theaters (they take in a vampire movie, but we never see it and I didn't get a good enough glimpse at the poster to tell you what it was). The social comedy rings true, the visuals are spectacular, the music by Piero Umilani is cool. This they cut out because Marisa Solinas wasn't a star. You should have made her a star, morons! 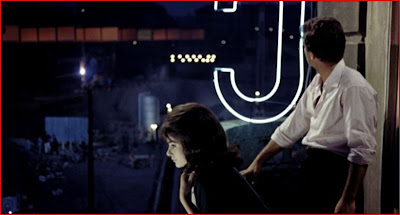 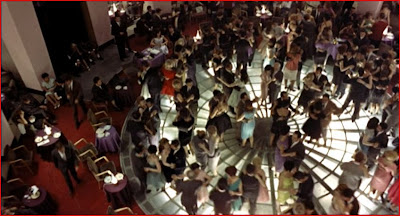 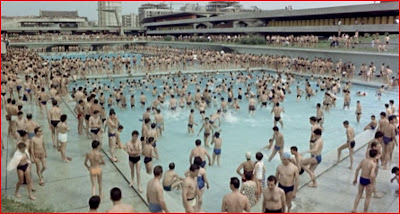 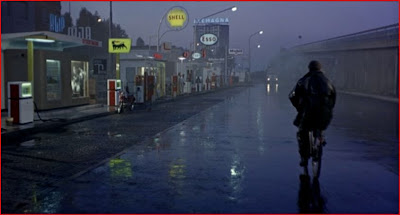 "The Temptation of Dr. Antonio" is most likely more famous than the film itself. This is Fellini's first go at color and it looks as pretty as you might expect, but the genius of it is everything the director and his effects team does to set up the illusion of the giant advertising poster of Anita Ekberg (exhorting Italians to bevete piu latte: drink more milk!) coming to life to torment the prudish citizen who finds the billboard obscene. There is a real giant billboard built on location, and there are models of the same location and surrounding cityscape that would do Toho Studios proud. Fellini films from high and low angles, makes use of oversized and undersized props, and blasts close-ups of Ekberg's face across the giant screen to convey her size. Maybe it's the color and maybe it's her outfit, but I think she looks better here than in La Dolce Vita. I'll let the pictures tell the story from here. 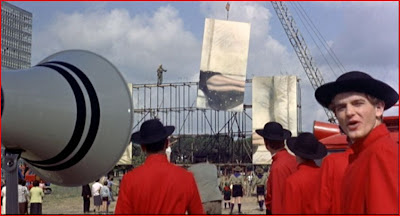 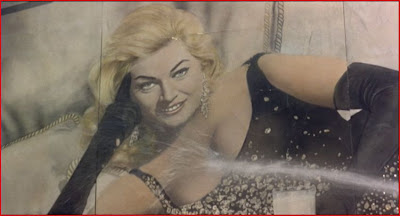 The symbolism in the shot above is just gross; that's what's funny about it. 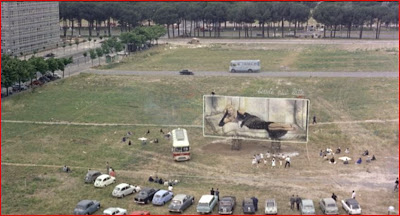 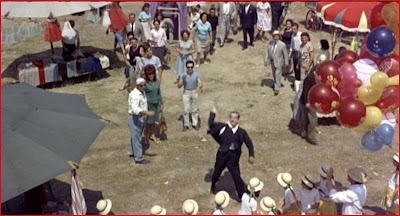 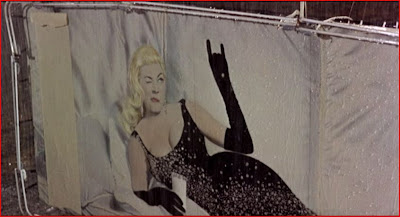 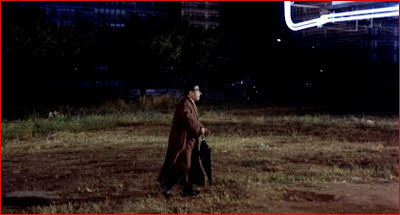 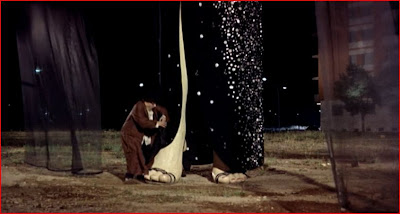 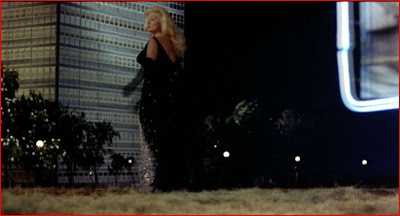 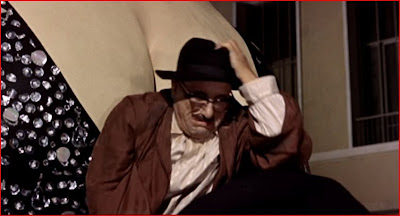 If this is the meaning of "latte" then maybe the future people of Idiocracy were onto something.

Luchino Visconti apparently didn't get the memo about making things big. "The Job" is a chamber piece by comparison to the previous episodes, though I'm sure he spent lavishly on interior decoration. He gives us Tomas Milian during the early matinee-idol phase of his career before his more famous work as spaghetti western bandit heroes or degenerates in Seventies crime films. It's another simple story: a German-Italian wife of Milian's aristocrat bargains with him to save him from scandal when gossip papers publicize some of his indiscretions and becomes a kind of prostitute herself when she compels hubby to pay her for sex, partly under pressure from her father to earn her own way in life. As I suggested above, this is the weakest part of the film, but it's still easy on the eye, thanks largely to Romy Schneider, whom Levine did choose to publicize as a new star, though she'd been working for a decade in Europe. Nino Rota did the music for this episode as well as for the Fellini, and I rather like this one better than his all-too-characteristic noodlings for his usual sidekick. 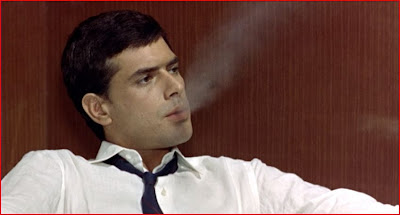 It's not that Visconti doesn't do anything interesting with the camera, but the small-scale story of poor little rich folk is a complete comedown after the Monicelli sprawl and the Fellini madness. 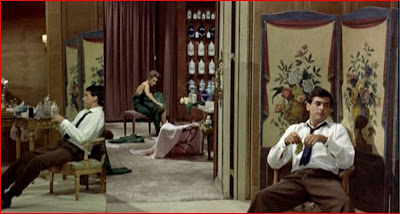 With Carlo Ponti producing, it was probably inevitable that the Sophia Loren episode would climax the film. De Sica is far away from Umberto D. or Bicycle Thieves territory in this ribald comedy, but everyone's been trying to live up to the film's concept, which is what sort of stories Giovanni Boccaccio might tell if transported to the 1960s to update his Decameron for a 1970 edition. In "The Raffle," the prize in the local spinoff of the Italian national lottery is a night with Loren, who runs a carnival shooting gallery. The complication is that she's falling in love with a local tough, but has to honor the terms of the lottery, which has been won by a local nebbish, or the Italian equivalent of such a person. This leads to some slapstick, some plain old slapping of Sophia's face, and an enticing display of the Loren legs. It ends, ending the picture, with a sort of happy ending for everybody. 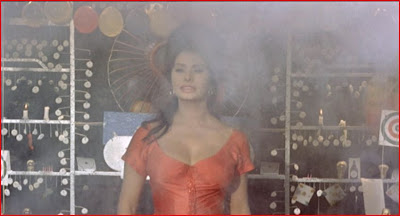 Sophia Loren emerges like an apparition from a fog of fireworks in "The Raffle." 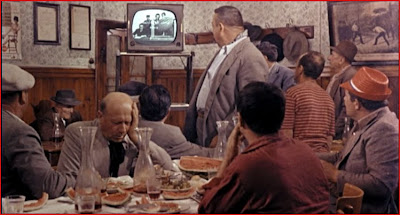 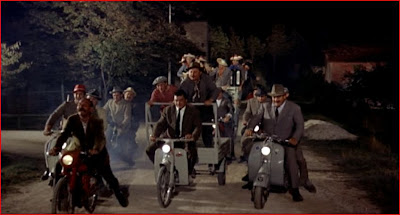 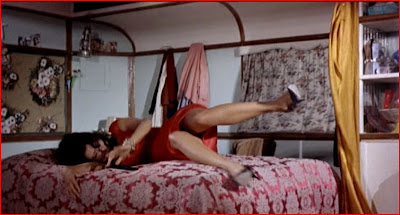 Keep your legs together, Sophia; it's gonna be a bumpy ride! 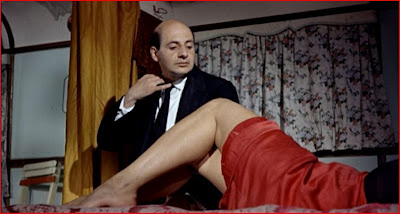 I suppose I like the Monicelli episode best because it has a lot of location shooting, and that appeals to the time-tourist in me. But the Fellini is also a kind of masterpiece, even if it lasts just a little too long, or long enough to go overboard with the Fellinisms like someone on a swing or people dancing in circles. As you've noticed, if I had to cut something the Visconti would go, but I can see how people with different sensibilities might prefer this one to the over the over the topness of Fellini or the crassness of the final story. And the De Sica is just a funny story with possibly the most beautiful woman in movies at the time to recapture your attention and wind things down. It's nothing great but it reestablishes that bustling exuberance from the first two stories that Visconti lost track of. But I forgive Visconti since I know he had The Leopard on his mind. He even does some product placement to preview his next feature by having Milian flip through an English-language edition of the Lampedusa novel.

Boccaccio '70 is an essential stop on anyone's wild world of cinema tour, if for the Fellini alone. But Fellini and Anita will have done some honest work if their gorgeous monstrosity attracts viewers to this sampler of Italian cinema in its golden age of global influence.

A trailer, too? But of course! And you'll get to hear "Soldi, soldi, soldi," which I guess was the hit tune from the movie.

Boccaccio'70 trailer
by soulpatrol
Posted by Samuel Wilson at 10:46 PM

I've only read about this film, but have not yet had the chance to see it. Your screen grabs are just amazing looking. I'll admit that I've not seen many Italian films from the early 60's and prior, beyond the Hercules movies.

Samuel- I have this one in my collection but it is one of those I still have not gotten around to watching. In those days Italy made quite a few of these three-four short story films. Others are "Yesterday, Today and Tomorrow" and "Gold of Naples"

Rev., the Italian film industry was nearing critical mass by 1962, even though a lot of the output was still Hercules movies. Like the U.S. and Japan, Italy could hit you high and low, especially later in the decade and into the Seventies.

John: the portmanteau gimmick goes back pretty far, and the multi-director bit goes back at least as far as the American comedy If I Had a Million. The Amicus studio made the anthology film practically its house genre in the Sixties and Seventies, but nowadays films like Trapped Ashes are more exceptional than they used to be.