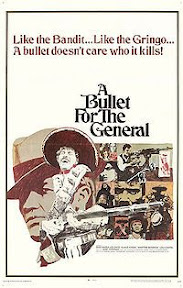 The American title sort of gives things away, but it sounds cool. The Spanish title of this Italian western translates as "Who knows?" It is only uttered at the very end of the film when Chuncho (Gian Maria Volonte) is pressed to explain why he's about to kill El Nino (Lou Castel), the gringo who befriended him and saved his life in Mexico. Chuncho is a revolutionary bandit who encounters Nino on a train the bandits have ambushed. He thinks Nino is a prisoner, being handcuffed, who wants to ride with the bandits as an alternative to execution back in the States. But we've seen Nino put the cuffs on after shooting an engineer, effectively stopping the train.

Above, Lou Castel as El Nino. Below, Gian Maria Volonte as Chuncho, with Klaus Kinski as Santo.

We know long before Chuncho realizes it that Nino has a hidden agenda. But for the time being he seems like many an American adventurer in Mexico, trying to steer Chuncho in a socially conscious direction. The bandit sides with the revolution mainly for money; he can sell guns to Elias, the rebel general, for a pretty peso. But he's prone to distractions, while Nino urges him to hook up with Elias directly to take an active part in the actual revolutionary fighting. For a time, Chuncho thinks he can be a rebel leader himself, or at least the power behind one, in the village of San Miguel. After he kills the local padrone, he "elects" one of the town's few literate men as leader and sets himself up to train their militia. But he gets bored, and then gets angry when his erstwhile partners ride off to take "his" machine gun to Elias. He abandons the village and his religious-fanatic brother Santo (Klaus Kinski) to take back the gun, but after a battle with government troops in which he and Nino get to use the weapon, he decides to go with the survivors all the way to Elias.

After treating Nino for a sudden outbreak of malaria, during which he discovers a mysterious golden bullet in the American's valise, they meet the rebel general, who informs Chuncho that the town he left behind was massacred without his leadership, with only an angry Santo surviving. A chastened Chuncho concedes that he deserves death for cowardice, with Santo happy to oblige, but Nino thinks differently. He takes time from his own secret mission (can you guess?) to save Chuncho, whom he told earlier to meet him afterward in Ciudad Juarez, where rewards and civlized luxury await him.

So why does Chuncho want to shoot Nino despite the debt he owes him, and despite the fortune Nino has given him with no strings attached? I suppose that if we asked director Damiano Damiani and co-screenwriter Franco Solinas (coming off The Battle of Algiers) they'd say it was a matter of revolutionary necessity. Nino deserves to die no matter what he's done for Chuncho, especially if the bandit sticks to his own objective realization in Elias's camp that he deserved to die for abandoning San Miguel. If that was so, then Nino's rescuing him shouldn't count for anything, even though it shows that, for whatever reason, Nino considered Chuncho a friend. That's the peculiarity of this story. Nino is a villain, and he dislikes Mexico. But a true villain wouldn't give a damn whether Chuncho is executed or not, or wouldn't share his ill-gotten earnings 50-50 with the man, even if Chuncho did sort of save his life during that bout with malaria. I think we're meant to conclude that Nino's feelings for Chuncho are sincere -- and that they shouldn't matter.

Quien Sabe? is an early example of the Revolutionary subgenre of spaghetti westerns. This was a natural direction for the genre to go in with so many Italian creative people having a Marxist bent. Perhaps ironically, this particular revolutionary film actually has more of an American feel in its sweep and scope than the pioneering spaghettis that emphasized stylized gunfights. Also contributing to that impression is the powerful score by Luis Enriquez Bacalov under Enrico Morricone's supervision. It sounds less like Morricone than Aaron Copland by way of Elmer Bernstein. The score and the spacious cinematography give this film a vastness that many spaghettis lack. Damiani handles the battle scenes forcefully, but also makes sure you see the executions, so that you understand that revolution is a rough, maybe dirty business and, from his point of view, a necessary one.

A landowner asks if Chuncho is going to kill him because he's rich. The answer is no; the people are going to kill him because they're poor and he's done everything in his power to keep them down. That's a crucial difference in emphasis. It's not so much that some people deserve to die, but some need to die for the rest to get their due. The filmmakers don't hide the dirty work and don't romanticize revolution. You could very well look at this film and decide the revolutionaries are no better or worse than the government they're fighting. But leaving politics out of the discussion, Quien Sabe? works as a dynamic action film and an interplay of two strong personalities, the underplaying Castel as the subtly sinister Nino and Volonte (from the first two Sergio Leone westerns) as the archetypal spaghetti bandit. As usual, someone else speaks Kinski's lines, but he's really into the action and dominates his scenes as El Santo.

Kinski as a mad monk is a natural, but his performance in Quien Sabe? isn't quite that.

Posted by Samuel Wilson at 6:04 PM

Samuel - First off, in seeing Klaus Kinski in the background of one of your screenshots, I have to see if anyone else will agree with my longtime assessment that Kinski and David Lee Roth look like twins? :)

OK, now to your excellent review and the movie. My knowledge of Spaghetti Westerns is very limited, and along with horror are areas that I really look forward to diving into at some point. Basically, after Leone, I'm a complete neophyte. Fortunately, this one is available on Netflix and I'm going to go ahead and bump it up toward the top of my queue.

Excellent work as usual... your writing is fantastic.

A bit of a favourite this one.

My wife has a soft spot for Nino but when I showed her Castel in Killer Nun she decided he hadn't aged too well :)

I love how these westerns subvert the usual hero villain conventions and at times we get at best flawed heroes with questionable motives.

Thanks for writing, folks. My own worry when I started to watch was that it was going to be artlessly blatant Marxism, but I was happily disappointed. Dave's comment about Kinski has put a memory of a music video that didn't exist in my head: "Dafe, I am your vater!"

Well Samuel I can understand why your expectations were what they were. It is after all a Damiani flick and he does do marxist subtext. What his films also do though is tell stories, and tell them well. His eurocrime flicks are all a sheer joy and in many ways the antithesis of the more hyperbolic polizitto flicks.

Damiani's world of crime is banal. Nothing like Lenzi's or Castellari's. He does not celebrate criminals or heroic supermen and pays attention to the effects of crime and how they have an effect on people in particular.

The marxism may be a little blatant, but here you are dealing with what I would rank as one of the top eurocrime directors along with lenzi, di leo and castellari.