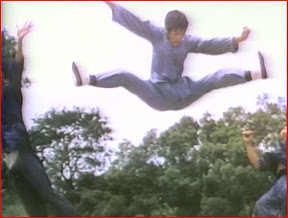 Ti Hong is an aspiring doctor who works in Dr. Chu's "surgery," as the English dubbing of Shen Jiang's film calls his clinic. Our hero's mind seems more set on kung fu, as we might hope, this being a kung fu film, though his main motivation seems to be the opportunity to practice with Chu's attractive daughter. We find them desecrating a graveyard with punches and kicks as the story begins. Dr. Chu's staff has been treating a growing number of opium and morphine addicts recently. As one doctor notes, "It just started in the last six months since the Japanese opened that club." Coincidence? Who are we kidding? This is a Chinese kung fu movie; all calamities are obviously the Japs' fault. Sure enough, at that club we find the Japs plotting their next marketing strategy. "I think we ought to import less opium, get more morphine," one suggests to their boss, the Chairman -- a well-dressed man whose face we don't see, who communicates with his minions mostly with growls and grunts.

Business is good, but could be better if only Dr. Chu, who is waging an anti-drug campaign, could be discredited. The Chairman and his Chinese collaborators come up with a brilliant stratagem to do just that. They send one of their men to the surgery for emergency treatment.

Doctor: You a drug addict?
Minion: What's the matter? Mean you can't tell?
[Doctor takes Minion's pulse]
M: What's wrong?
D: Nothing!
M: Nothing? What do you mean? I'm an opium smoker. I've been smoking opium for the past fifteen years!
D: You don't look like an addict.
M: Well, I'm sorry about that, too! What am I supposed to look like? What sort of surgery is this? Oh, come on! Prescribe something for me! Something to make me feel better!
D: Yeah, yeah. We'll do that, yeah. Hey Lu, the usual dose.

After detecting nothing wrong with the man, the doctor gives him "the usual dose" of something on the man's word that, despite all the evidence one's pulse can provide, he's a desperate drug addict. He sure does act like one afterward, raving in ersatz agony and telling anyone who happens to walk in that "I've gone mad!" 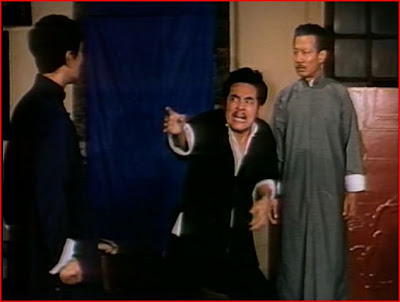 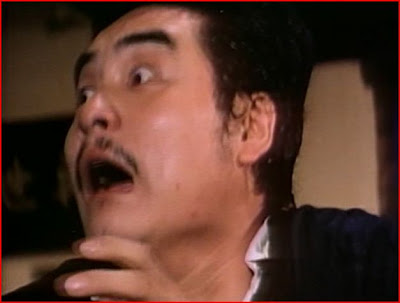 The doctors don't believe it, but the minion's pals defend his honor and the integrity of his illness, accusing Dr. Chu, who had nothing to do with the transaction, of malpractice. After some pushing and shoving, followed by some punching and kicking from Ti Hong, Chu agrees to pay the gangsters some hush money. But Ti Hong isn't having it. He invades the Jap-operated gambling den and wins the money back with extreme prejudice. That makes him a target for the Chairman's goon squad, but Ti Hong welcomes the attention. Confronted in the countryside by superior numbers, he asks a Hitler-moustached minion, "Are you a Chinese or a Japanese?" Why does he ask? "The Chinese, there's always hope for them. I'll treat them lightly. But the Japs, those pigs shouldn't live." This is actually just bluster. The victorious Ti Hong spares the Japanese, contenting himself with cutting their ears off. 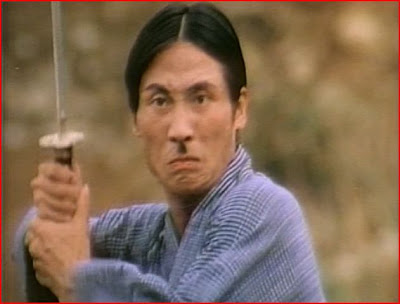 We could have warned these Japanese gangsters that Hitler style was useless against Chinese boxing, but since it would have fallen on deaf ears anyway the consequences of their folly are no great loss. 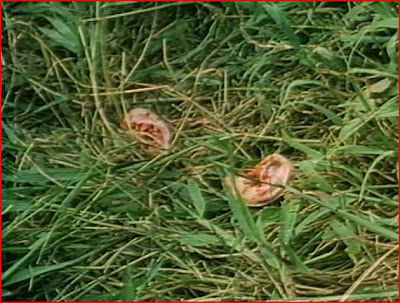 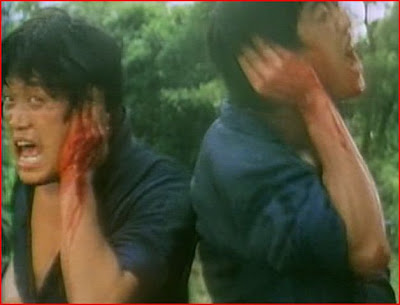 Dr. Chu has a conflicted view of kung fu. He feels that his daughter and Ti Hong are wasting their time, but he once ran his own kung fu school. Back then he was just as opposed to drugs, but certain Japanese gangsters questioned his views about the deleterious effects of opium. They challenged him to a fight against a champion of theirs who not only sold but used the stuff. The only unusual effect of his addiction was to give him something like iron fingers and the power to embed them in wooden surfaces. He used this talent to tear Chu's shirt and bruise his back. This defeat compelled Chu to give up martial arts (and anti-drug campaigning, for a time), steering him toward his medical career. We've given you the key puzzle pieces now. There's a master criminal whose face we don't see, and the hero's master was humiliated by someone we do see in a flashback. Can you guess the Chairman's identity?... 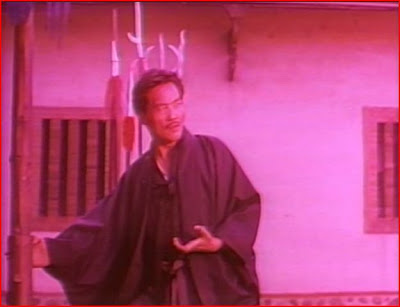 Meanwhile, the Chairman's strategy shifts from discrediting Chu to discrediting Ti Hong. The bad guys approach this challenge with the same brilliance they showed earlier. They send the wife of a comedy-relief morphine addict into dangerous proximity to our hero so she can cry rape at an inconvenient moment. The addict denounces him and the wife insists that she couldn't resist him because he's so strong. Enraged, Ti Hong shoves her to the sidewalk, stunning her. The bad guys slip her a serious mickey and declare her dead. This gets Ti Hong carted off to prison, where he can still beat most of the guards and their Japanese pals with both hand shackled above his head. But it's convenient for him to be there once the bad guys arrest Chu and his daughter, bringing everyone together for the big reveal of the Chairman's identity and the big showdown between him and Ti Hong. 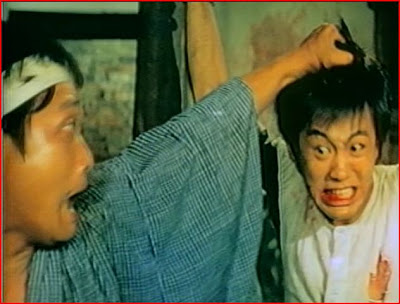 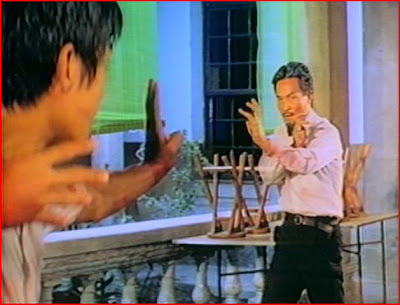 I can't fairly judge the quality of star Yiu Tien Lung's fight choreography because Mill Creek Entertainment's copy of Infernal Street is a clearly-cropped fullscreen version. The fighting is passable and our hero brawls with expressive enthusiasm, but the story (at least in English) is childishly ludicrous. The writer wants to drive home the anti-drug message, most forcibly in Ti Hong's flashback to his father's death from addiction, and his mother's immediate suicide, presumably from smashing the back of her head against a wall. But the dialogue (again, at least the dubbing) undermines any seriousness of purpose, as when an addict is asked why he doesn't kick the habit and answers, "Come on, I couldn't do it and it doesn't cost that much!" in a Jerry Lewis-like voice. 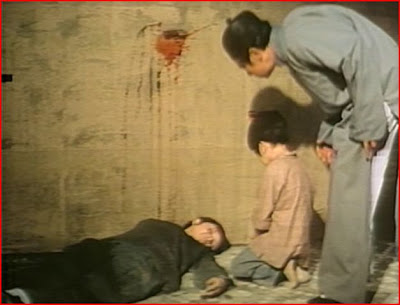 The toll of drugs: Above, Ti Hong's mom is collateral damage. Below, "Would you like some morphine?" "WOULD I?!?" 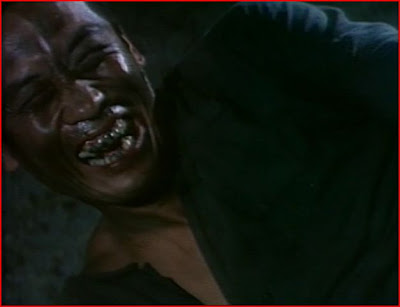 It renders the drama ridiculous but definitely enhances the film's entertainment value for certain audiences. I'm sure the typical anti-Jap material has the same effect, giving some viewers a certain thrill of transgression at seeing such naked hatred expressed by one people for another. Here it's done in such a bloody slapstick manner that it really is kind of funny, whether it was meant that way or not, and I suppose the Chinese in the Seventies still had fresh enough memories of Japanese atrocities to explain their attitude. In the form in which we have the film I can safely recommend it only to bad movie buffs who'd find the idea of a Chinese Reefer Madness with kung fu and xenophobia thrown in potentially appealing.

Flashlegsrare has uploaded a video trailer (widescreen and subtitled) for Infernal Street to YouTube.