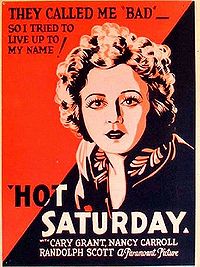 This morning I was reading a review of a book about Alice Guy Blache, the pioneer female filmmaker, and while Guy worked in the silent era the reviewer found cause to comment on Hollywood's pre-Code cinema of the early talkie years. She mentioned the period's "sublime indifference to middle-class propriety," and that made me rethink A Free Soul a little. Middle-class propriety is exactly what's missing in that film's clash of wealthy lawyer's family and grasping gangster from the gutter. It can be indulgent toward upper-class frivolity and even a little sympathetic with the gangster's aspirations while affirming an archaic honor code that requires someone to pay for the heroine's indiscretions. By comparison, William A. Seiter's more modest Paramount feature deals with the middle class of small town America, and its view of middle-class propriety is contemptuously scathing.

In the little town of Marysville all the young people look forward to Saturday night, their only opportunity to cut loose with their little earnings from local jobs. They look enviously on the local millionaire, the playboy Romer Sheffield (Cary Grant) who keeps a summer home nearby, and they leap at the chance to spend a Satuday night at his place, even while they worry that "the town'd burn to the ground if we took the girls within a mile of that guy." We follow the adventures of one group of bank employees, particularly Ruth Brock (Nancy Carroll), on whom Sheffield has a lusty eye. Also hot for her is co-worker Conny (Edward Woods, the Public Enemy who might have been), who grows jealous of Sheffield horning in on him. But we notice that the notorious Romer knows how to take no for an answer, while Conny, after an evening of dancing, resorts to caveman tactics on a rented boat. Fending him off, Conny chides him: "What do you expect for a boat ride? Marlene Dietrich?" Frustrated, Conny ditches her on the other side of the lake, where she ends up at Sheffield's place again. Once more, she rebuffs Sheffield's advances, but he admits to her that "A man would have to be very stupid to touch you without first knowing your heart." He has his chauffeur take her home with her virtue intact, but word spreads, fanned by an angry Conny, that she had done the unspeakable and spent the night with Romer. 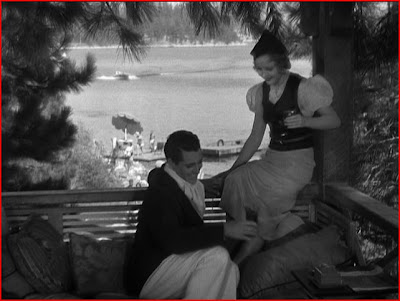 Cary Grant's attitude toward Nancy Carroll evolves from playful to pensive over the course of a Hot Saturday. 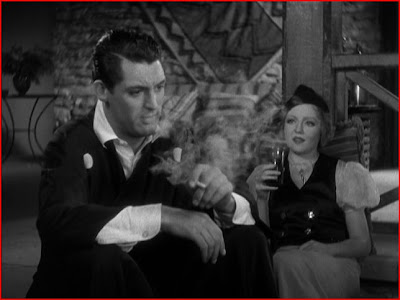 Once again a heroine's reputation is at stake. Like Jan Ashe in Free Soul, Ruth is a daddy's girl with an indulgent father, but unlike Jan she has a living mother, a miserly tyrant (Jane Darwell) who sees her daughter as an extra source of income. Fair enough in hard times, but her reaction when the gossip gets Ruth fired from the bank on morals grounds tells the girl that Mom is less interested in morals than money, less worried about Ruth's reputation than its financial repercussions. For Ruth, that's just about as ruinous as the gossip. Luckily, she has someone to turn to: geologist Bill Fadden, a longtime family friend who's back in the area to do some research. The fact that he's played by Randolph Scott should tell you enough about the character, and the film is setting us up to think that this simple, straightforward yet reticent man is the right one for Ruth. But the film has set you up to have the carpet yanked from under you, as Bill proves just as susceptible to gossip and jealousy as nearly everyone else. In fact, there seems to be but one person of her own age bracket who respects her for herself rather than for her reputation -- the infamous playboy Romer Sheffield.

Given a choice between a cad, a creep, and a common man, Ruth and Hot Saturday's writers go with the cad -- who, admittedly, proves himself something slightly better than that. He never becomes a good bourgeois -- he shudders at the thought of marriage -- but he ends up the best partner available for a woman who remains free and virtuous, though the virtuous part apparently ends with an unseen tryst at the Sheffield place after Bill Fadden's first sudden fit of jealousy. When she confronts Bill with the statement that what he believed about her hadn't been true yesterday, but was true today, his hopeless dumbfoundment disqualifies him once and for all as a proper mate for Ruth. The film's message is that Bill no more than the rest of Marysville is fit to judge the heroine, not necessarily because they're hypocrites, but for any number of reasons that boil down to the town being a stupid, suffocating place unfit for, dare I say, a free soul. It doesn't seem to be a question of morals or ethics, but a matter of middle-class Marysville being contemptible, its people almost a pure booboisie. 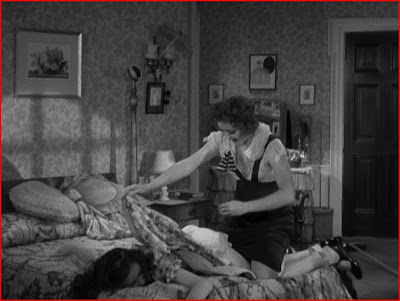 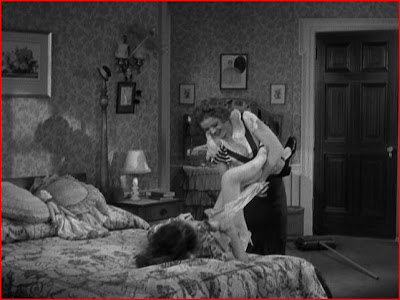 Later, after she's been fired and rebuffed by her mother, a despairing Ruth treks out in a rainstorm toward the cave where Bill Fadden's doing his field work. Being only a weak female, she faints at the threshold and Bill finds her passed out in the mud. When Ruth awakens bare-shouldered under a blanket inside the cave, the first thing she sees is her own underwear hanging from a clothesline, alongside the rest of her clothes. It sinks in that she's naked under that blanket, as Bill looks down longingly upon her... 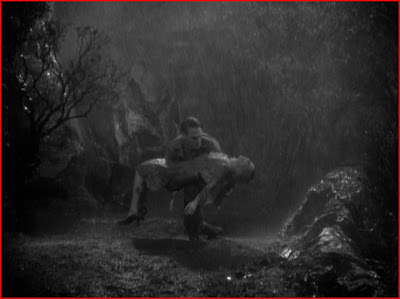 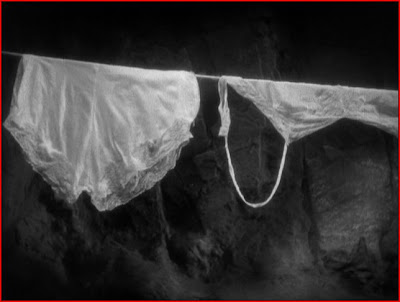 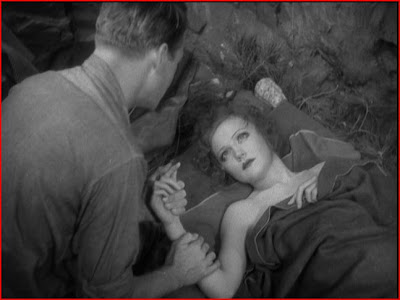 Wikipedia reports that Hot Saturday was Cary Grant's first starring role, but it's really Nancy Carroll's film. It's a woman's picture, after all, and Grant's too green to steal it from her. He hasn't yet fully crafted his persona, and he's kind of awkward on screen, looking down or to the side as if not wanting to look the camera in the eye. But he does convince us that Romer Sheffield is a bad boy in his own mind but not as bad as many think. His housemate Scott is also pretty raw here, but that seems to have been built into his awkward-around-womenfolk character. As Conny the creep, Edward Woods is at first just brash but blossoms into full-blown obnoxiousness as he emerges as the villain of the piece. He makes more of an impression than he did alongside Cagney after their roles in Public Enemy were switched, but it probably wasn't the kind of impression that wins one fans. As for Nancy Carroll, I don't believe I've seen her before, but she made a good first impression here.

Hot Saturday is the sort of story that Lifetime might tell today, though the heroine might be more worried about cyberbullying now than morals clauses. It was probably meant as a trifle back in the day and it's a trifle now, entertaining today almost as much for what it tells us about the culture that made it as for the story it tells. Universal's Pre-Code Hollywood sampler is the right place for it, and Hot Saturday helps make that six-film set worth having.

As an added treat, iieef has uploaded to YouTube a musical interlude from Hot Saturday including the song, "I'm Burning For You." Enjoy.