If you're Sony Pictures Entertainment and you're going to release two movie collections titled Bad Girls of Film Noir, there's a one-in-eight chance that one of your offerings will be a women-in-prison film. Imagine your good fortune when you happen to have a film called Women's Prison in your extensive B-movie library. Lewis Seiler directed it, Crane Wilbur and Jack DeWitt wrote it, but the main attractions are the bad girls. Jan Sterling, Audrey Totter and Cleo Moore are among the lead convicts, and their warden is Ida Lupino. How could you go wrong?

Easy. For starters, make your women convicts the least hard-boiled, least menacing bunch of cons you can imagine. The inmate population are really a merry sorority once you get to know them, and once you get over your own terror at the prospect of exile from home and hubby. We actually get off to a strong start as we follow Helene Jensen (Phyllis Thaxter) into the can. She's no criminal, but she happened to kill a kid while speeding. She can't take the confinement and isolation, and spends her first night on a non-stop crying jag until the guards have to put her in a straitjacket and dump her in a padded cell. 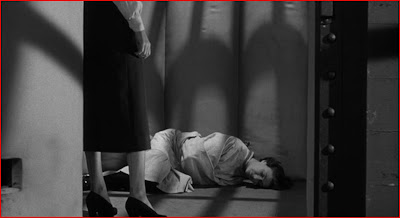 But Helene gradually drifts to the periphery of the picture, which proves to be an ensemble piece showcasing a number of harmless types. Cleo Moore, for instance, is a southern-accented bimbo determined to improve her diction. Vivian Marshall does impersonations: a passable Bette Davis on her own, but when she mimics prison personnel (including Lupino) the relevant actresses dub in their own voices. Jan Sterling is such a good egg that rather than have a guard discover Audrey Totter in a tryst with her smuggled-in husband from the adjoining men's prison, she burns her own hand with an iron. There aren't any rivalries or factions in this prison, unless you count the four black women who share their own cell. The film's just a little bit stereotypical about these four. They sing in close harmony and one of them is shown (with the cinematic equivalent of a straight face) singing "Swing Low, Sweet Chariot" while scrubbing the floor. But they get along with the white girls easily enough, though it may have been different had there been five of them. 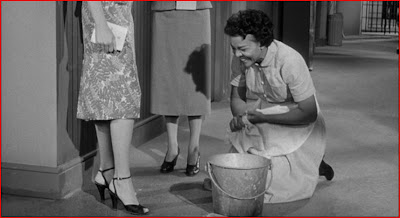 "I'd know those legs anywhere!" Juanita Moore welcome Jan Sterling back to stir. Below, the hand won't look as good as those legs after this stunt. 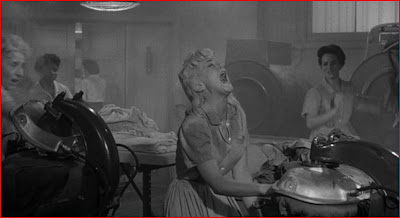 There's hardly a hardened criminal in the bunch, unless you count Sterling's repeat-offender check forger. Women's Prison is more interested in portraying its imprisoned women as victims, not of society, but of their vicious warden, Amelia Van Zandt. This character, and the casting of the generation's lone female auteur in the part, may be the most offensive thing about this picture. Van Zandt is a control freak indifferent to the suffering she causes and dedicated to breaking the will of her charges. "I know these women, all of them," she says, "and only a strong mind can control them." When Helene Jensen freaks out on that first night, Van Zandt has her straitjacketed mainly because the garment can be strapped on so tight that the new fish won't be able to scream. 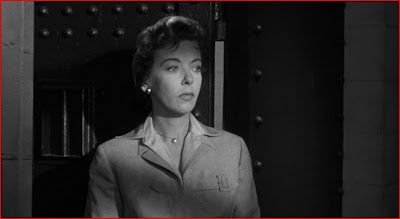 Dr. Crane: May I tell you what's wrong with you?...You dislike most of the women here because, deep down, you're jealous of them.

Crane: You're feminine, attractive. You must have had opportunities to marry. Maybe you even cared for somebody once in your cold way.

Crane: But possibly he turned to someone who could give him what he really wanted: warmth, understanding, love. There's hardly a woman inside these walls who doesn't know what love is.

VZ: Yes, and that's why most of them are here.

Crane: Exactly. Even the broken wrecks have known some kind of love, and that's why you hate them.

The film goes on to confirm this laymen's analysis when Van Zandt is cornered inside the padded cell by a vengeful male con during a riot. Threatening him with reprisals against his wife, not knowing that she's already dead, the warden cracks and raves "I hate them all! I hate them all!" before Dr. Crane calls for the straitjacket. Maybe I'm being politically correct, but there's something ugly about this. There've been evil and sadistic male wardens in prison films, and some of that evil sadism may well be blamed on sexual or social dysfunction, but the way Women's Prison goes about it you're invited to assume that something's wrong with Van Zandt just for being a warden instead of somebody's wife. Having to perform this role seems like a penance for Lupino, an almost unconscious punishment of her by Hollywood for being uppity enough to become a producer and director. However, if you resist reading too much into the role, you can probably get some campy pleasure out Lupino's chic villainy, whether she's slapping the daylights out of a pregnant con or virtually climbing the walls of that padded cell. 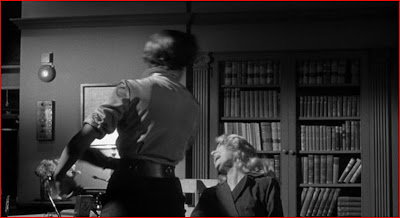 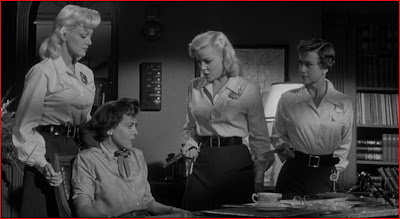 Columbia pitched Women's Prison as a racier film than it really is, and the film presents itself as a kind of social problem picture denouncing the persistence of co-ed prisons -- the sexes are segregated but are all in the same compound. Today, Sony pitches it as a film noir, but despite its dark and shadowy moments it falls short of the genre standard. For a film set in prison there's little sense of criminality or guilt in it. The women prisoners are somehow too good to be true, and that's a no-no for noir. But since Sony is also sort of selling the Bad Girls collections as camp (why else advertise Cleo Moore's limitation as an actress?) Women's Prison would seem to belong. It's definitely a document of its time, and its certainty that it will shock audiences is one of its more charming features now.
Posted by Samuel Wilson at 12:06 AM

I always enjoy Lupino's performances, especially when she gets a chance to over-act. So her presence in the movie would almost tempt me to want to see it.

This is a fascinating review, Samuel - I was especially interested in your description of the portrayal of Lupino's character and the attitudes it betrays towards working women. I'd still like to see this as I'd be interested to see a woman's prison movie which isn't just campy, though I take your point that this element is here too.

Judy, have you seen Caged? Made in 1950, with Eleanor Parker. An excellent non-campy women-in-prison movie.

And from 1933 there's Ladies They Talk About, with a very young Barbara Stanwyck. Being a pre-code movie it's more outrageous than Caged, but still a fairly serious movie.

No, I haven't seen these two but will look out for them - thanks for the suggestion. I've been watching quite a few Stanwyck pre-Codes lately but haven't got to 'Ladies They Talk About' yet - the Parker movie sounds good too.

I'm aware of Caged but haven't seen it. I know enough about its reputation to sort of hold it as a standard for women-in-prison films of this period that Women's Prison doesn't match either in seriousness or outrageousness.

Samuel, Caged is a must-see. It really is probably the best serious women-in-prison film ever made. And for 1950 it's remarkably cynical and quite hard-edged.

Judy, I love Stanwyck's pre-code movies as well. I think you'll love Ladies They Talk About.